As the gloomy days stretched on, I moved from my journal and making postcards on recycled oatmeal boxes, to a small canvas…expanding on the plants and elements of the previous two, I painted these two fantasy jungle scenes, using plants and details both real and imagined.

They match up to form a bigger picture. 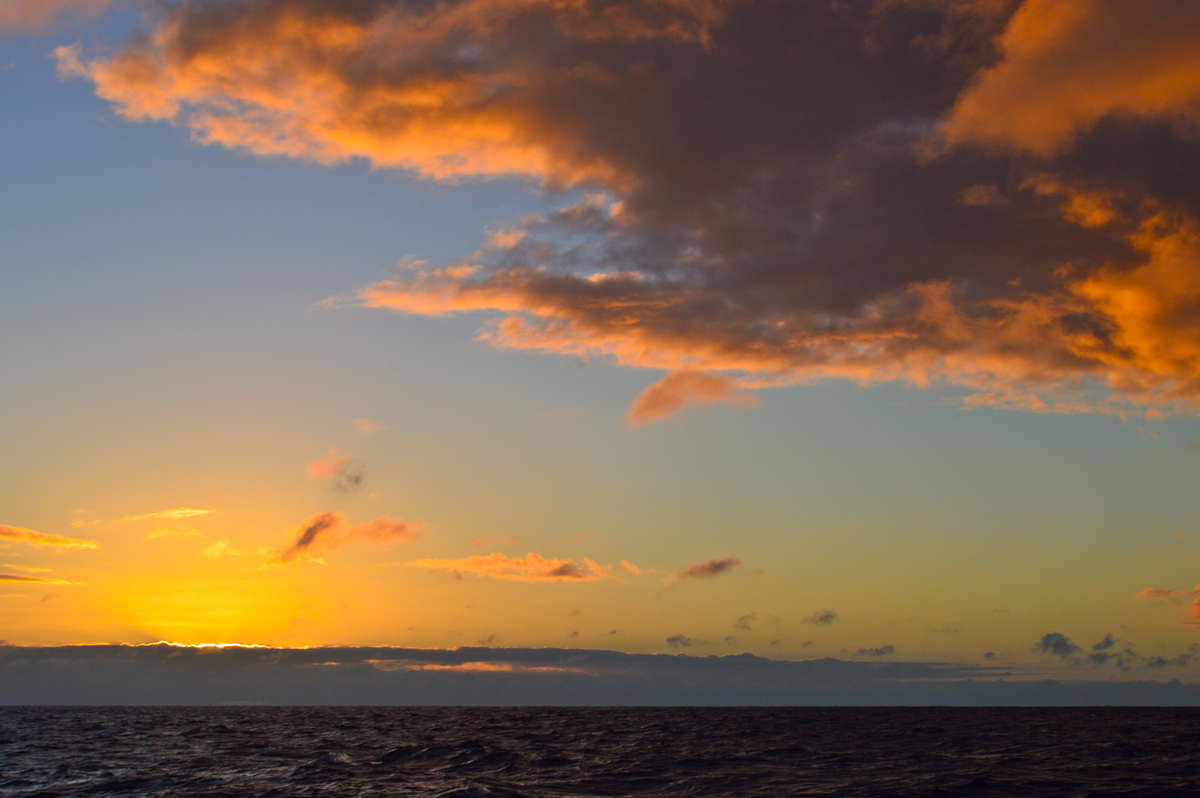 Olá!! We’re back on terra firma!

It took us forty days to cross the Southern Atlantic, from Saldanha in South Africa to Paraiba, Brazil.

The first three days at sea were spent cutting across the Benguela Current…a hundred-mile wide strip of Cold & Nasty that runs along the West Coast of South Africa, starting at the Cape of Good Hope. I was oblivious of this part of the trip, alienated from the land of the living and set adrift in my own little personal hell of mal de mer. Once past that rough patch the worst of the seasickness subsided, though it was another week before I felt well enough to eat a small cooked meal, or drink a whole glass of water in one go. Some things I never did feel strong enough to go back to, like coffee, oatmeal, or anything made with onions, chillies. A typical day’s intake would be: one apple for breakfast, a cup of rice with one sardine (in tomato sauce) for lunch, two small chapattis with a tablespoon of peanut butter and drizzle of honey for dinner, and about three cups of water spread through the day. No appetite for anything.

Life in a boat on the open ocean is very physically demanding, too. I had forgotten about the way our sailboat, running dead before a trade wind, hurls itself from side to side without a moment’s peace. There is no standing still, no time at which your body can go slack and just relax. One moment you are pushing against the kitchen bench, trying not to tumble forward into the pot of boiling pasta; the very next instant you are clinging for dear life to the same kitchen bench, as the boat tries to slam you, hard, against the opposite wall. Every activity, every minute, every step in the boat, is accompanied by a slight clenching of muscles and a persistent struggle to remain upright and uninjured. Even sleeping is like being strapped into an amusement park ride: legs locked and holding the body when it swings into an almost-upright position against the hull; the next roll has you lying with your feet higher than your head, and it feels like all your bodily organs have slid into your throat. In the other sleeping position you roll like a log from one side of the bed to the other every 3 seconds, unless your bunk is very, very narrow (a coffin would make a perfect bunk) or you sleep with your legs and arms spread far apart, like a starfish.  I lost 7 kilos (15 lbs.) 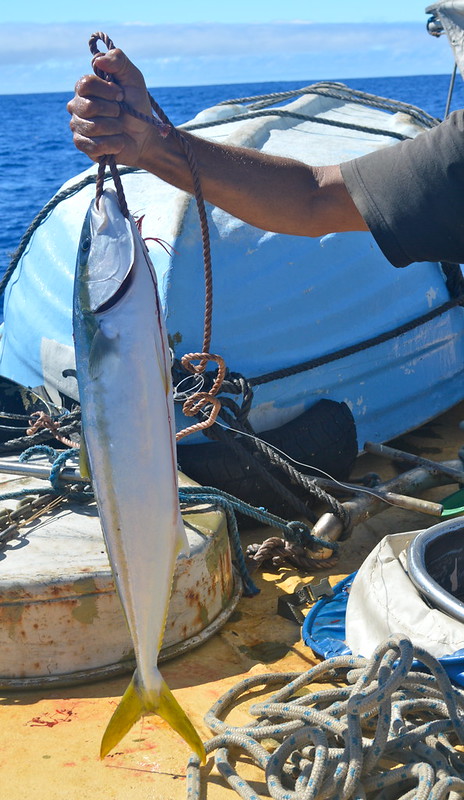 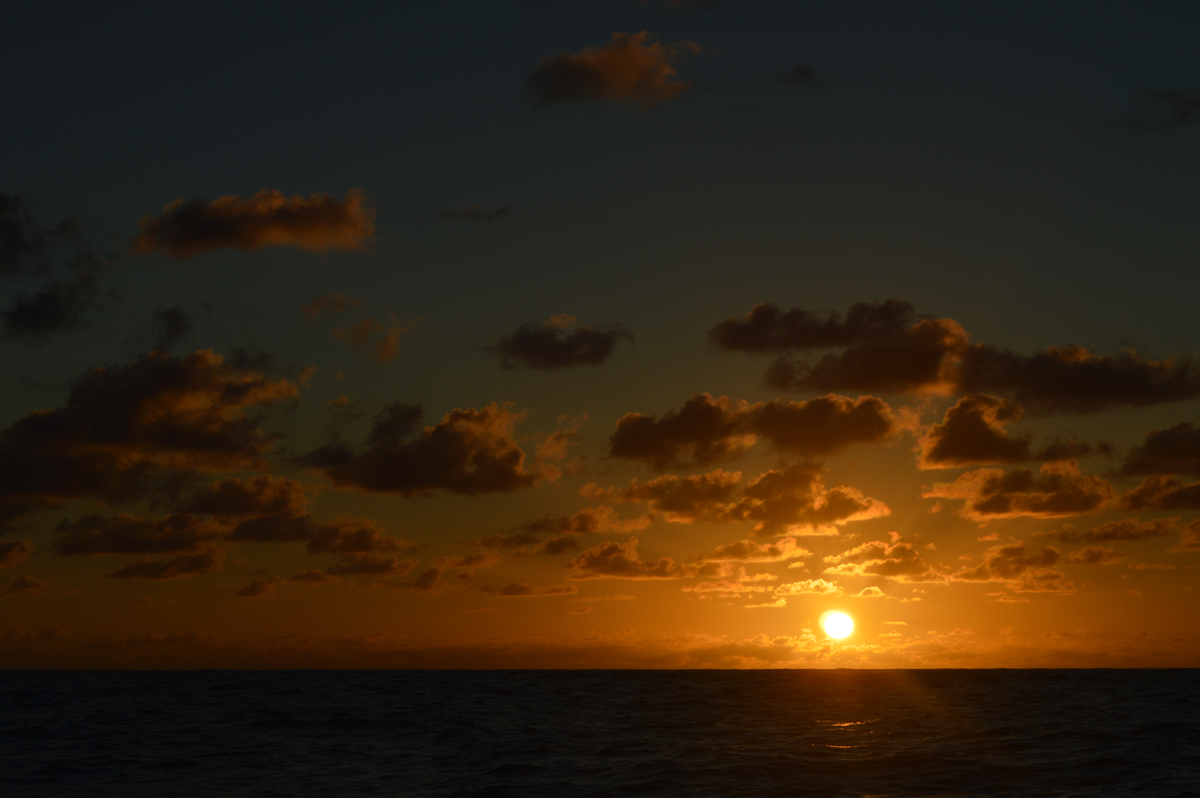 I didn’t manage to do anything “creative”. Concentrating on fine work immediately brought on feelings of nausea, and if I so much as set anything down on my desk for one second, I lost it the next. A Go Pro mount, a couple of pens, an ink bottle, an iPod shuffle…all were hurled across the room and vanished in the bilges of the boat. I gave up after that, and did nothing better than read during the entire trip…not a bad thing, I didn’t read enough in 2014, so it was good to catch up a little.

Some leftover pictures of our last visit to Cape Town, South Africa.

The oldest city in South Africa has a vibrant and beautiful centre that looks and feels like nowhere else. Lots of grand old colonial buildings have been given a quirky modern twist with fresh coats of paint in bright candy colours, the sleek finishing touches of trendy cafés and boutiques, and street art.

These were taken two days before we left the country… 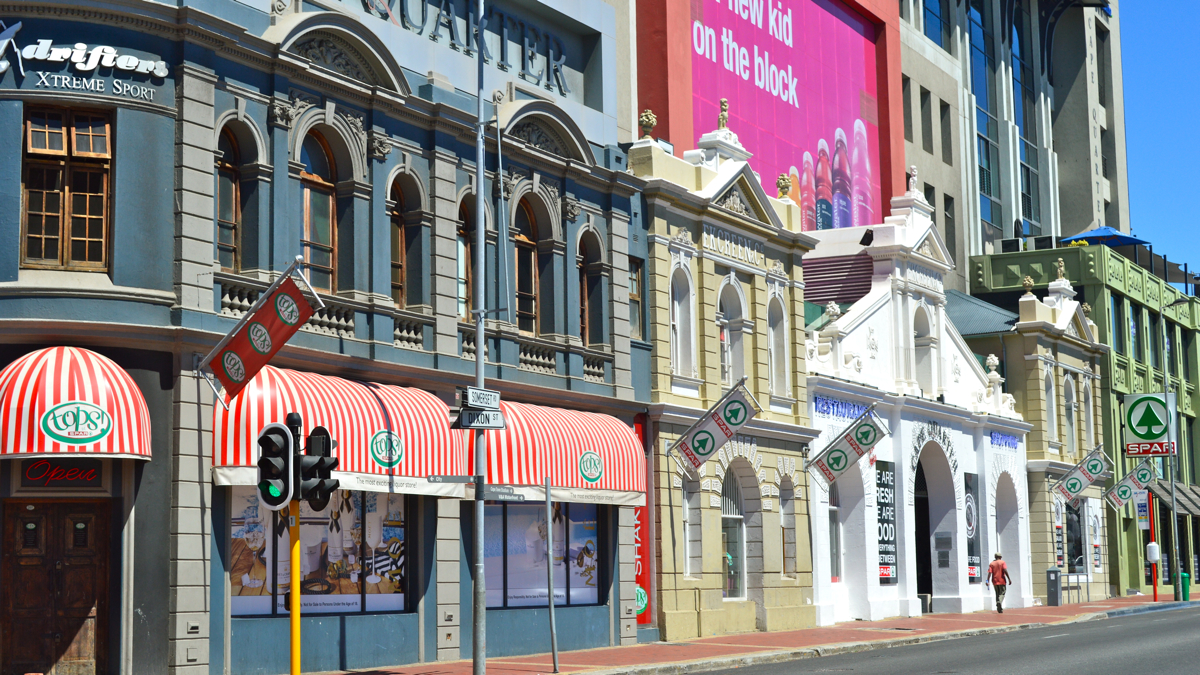 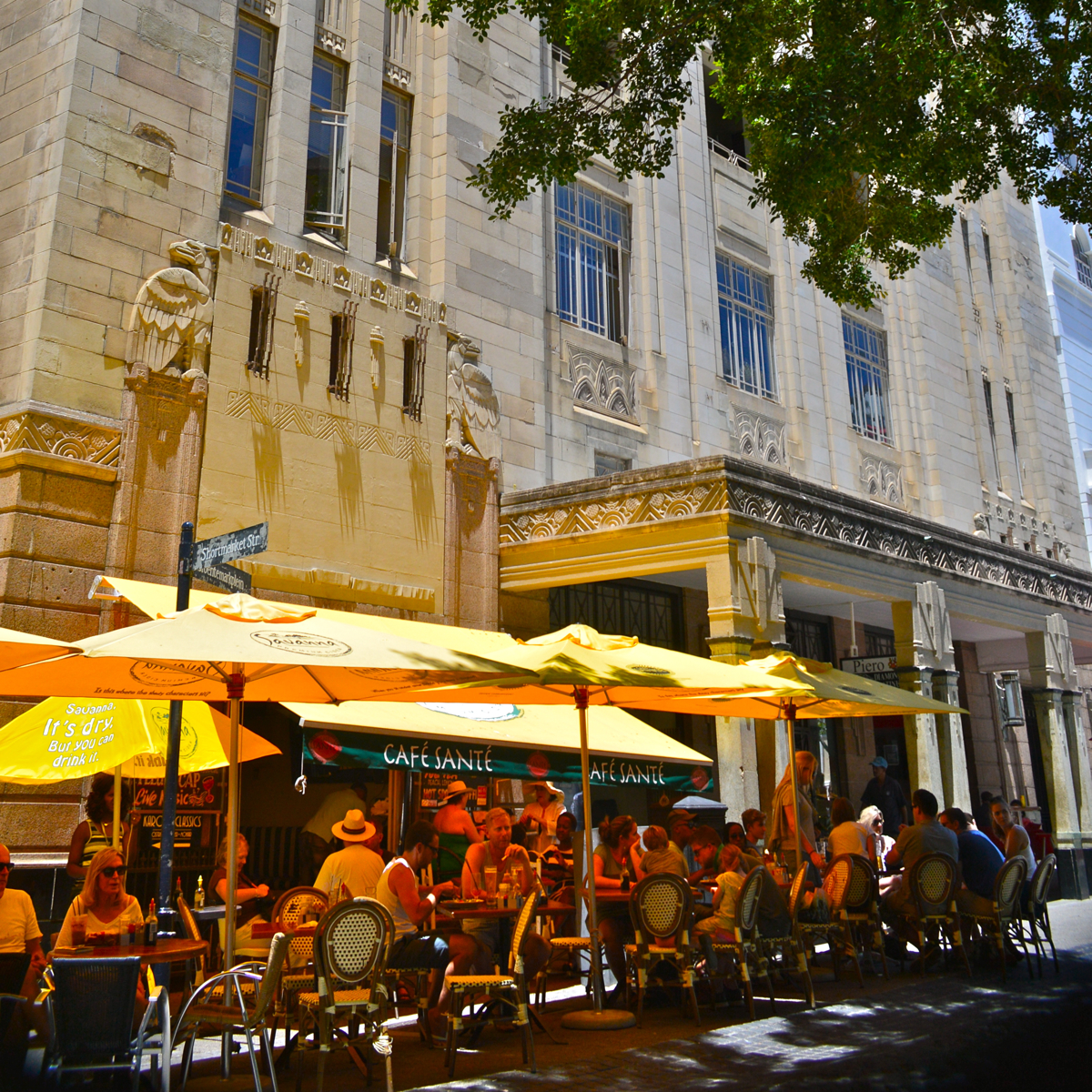 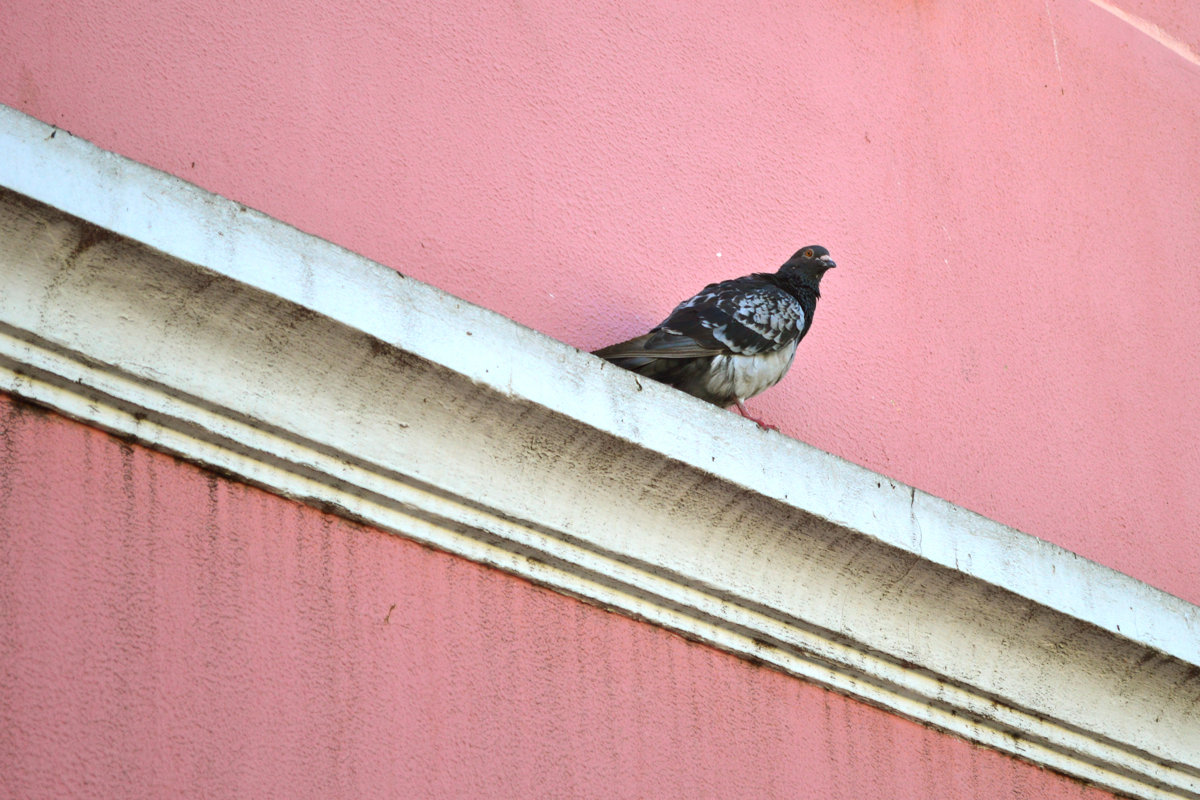 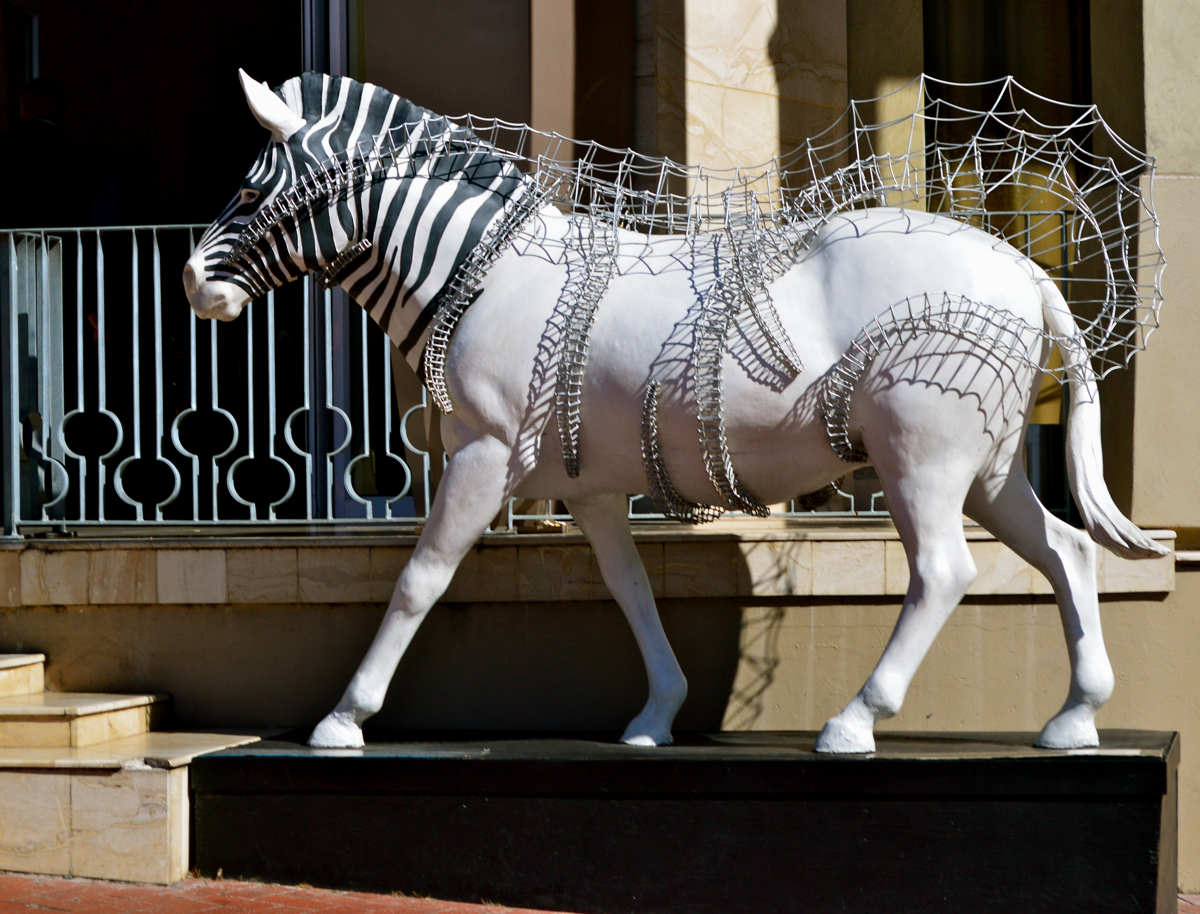 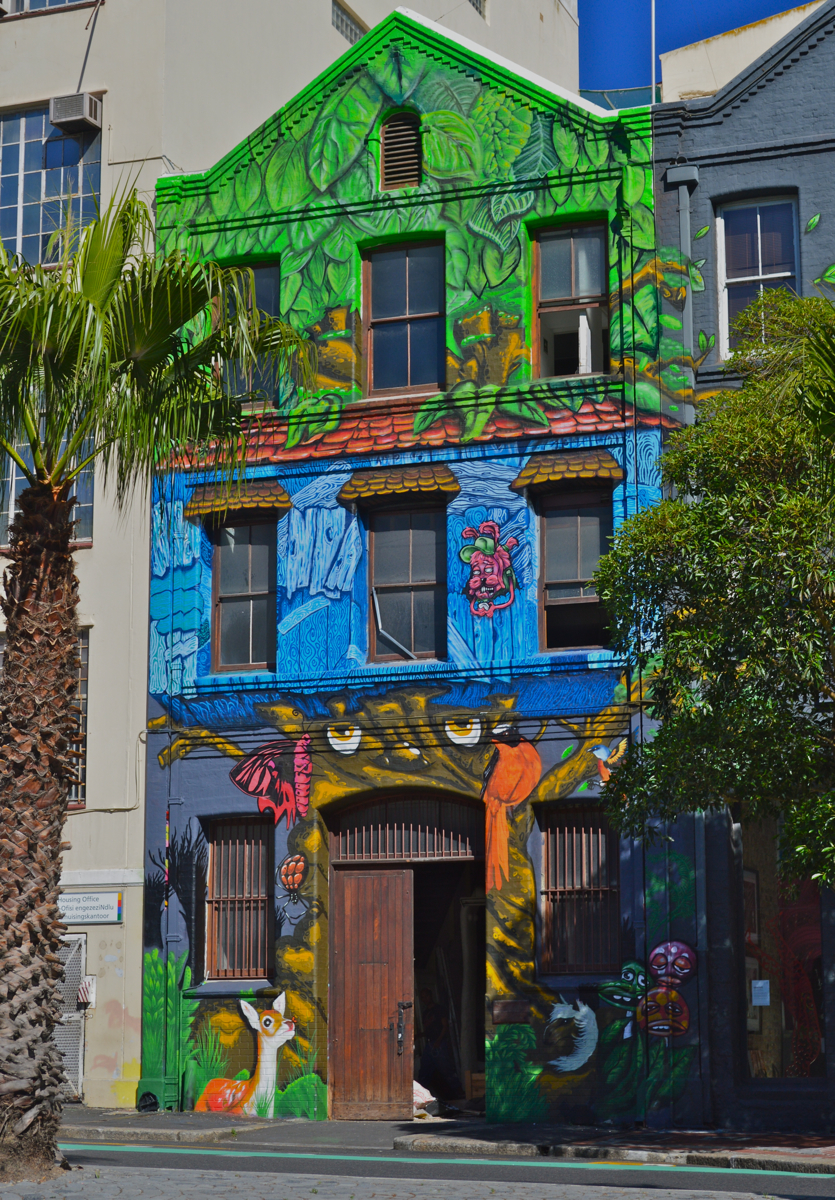 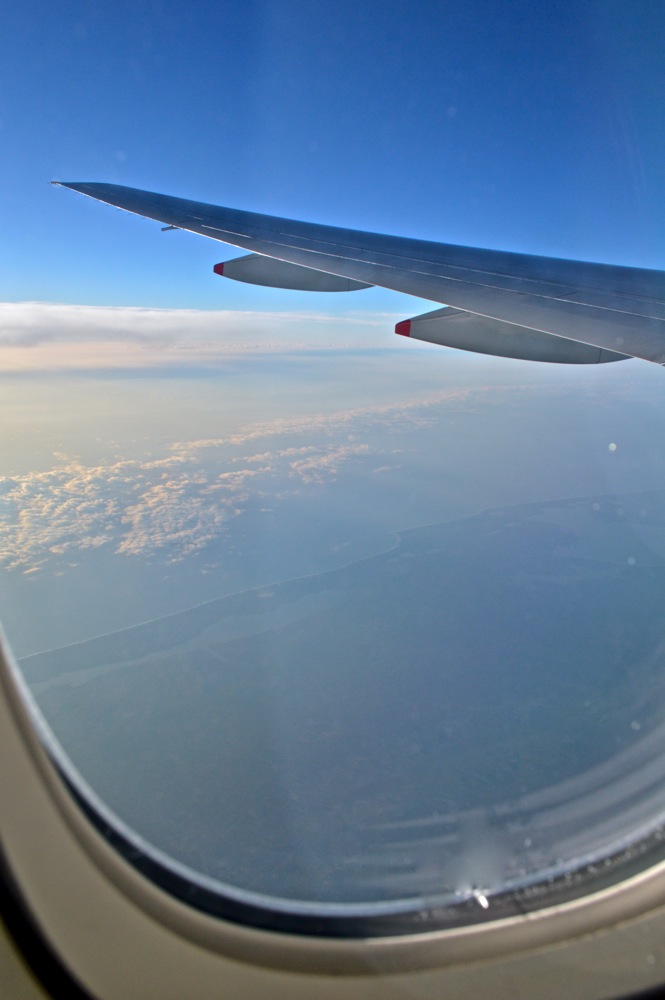 The moment it first really hit me that I was going to be in Africa, was 7 hours after leaving Singapore, at dawn. As the first blush of rosy light crept up from behind the horizon, we were soaring over the huge, seemingly endless island of Madagascar. What a rush! I wanted to squeal like a pig at the sight, but the oh-so-cool, very handsome 16-year-old boy beside me prevented me from behaving like a silly old goose.
At the airport I was preceded by a distinguished looking gentleman in a silk suit, and his retinue of plump, corporate-styled women. As we emerged into the vast arrivals hallway, a brass band like a small army struck up some rousing music, and a hundred people in bright clothes, beaded jewelry, and head cloths, surged forward to greet the man. I was stuck, smiling politely, behind this mob for about 20 minutes before I found a way, in the opposite direction, around them and out of the airport. My taxi driver, Albert, told me the dude was some homecoming preacher. Welcome to Africa! 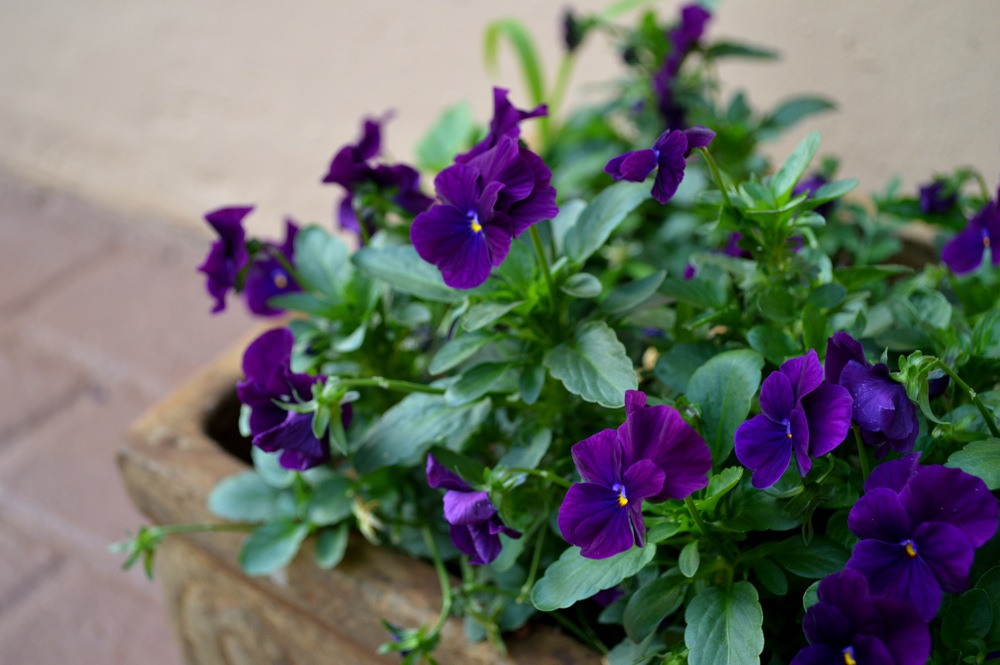 These next photos are taken from around the lodge I have been staying at. You can’t really tell I’m on the continent of Africa, by these pictures…The Suburbian Guest Lodge is, as the name promises, tucked away in a respectable (read “white”) neighborhood of manicured gardens, gorgeous flower beds, high walls topped by razor or electric wire, and remote-controlled gates festooned with notices of the various armed response security agencies employed by paranoid owners within. 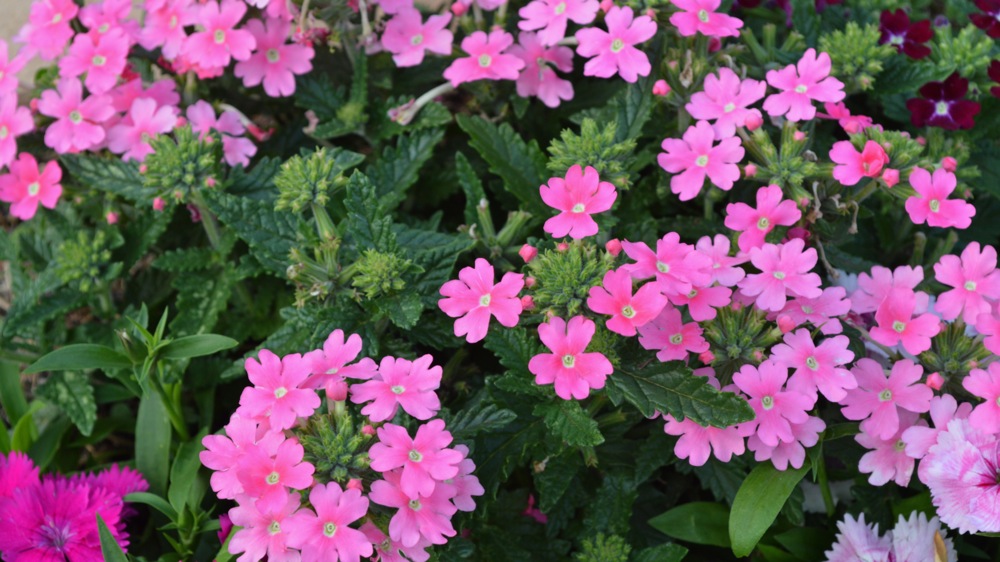 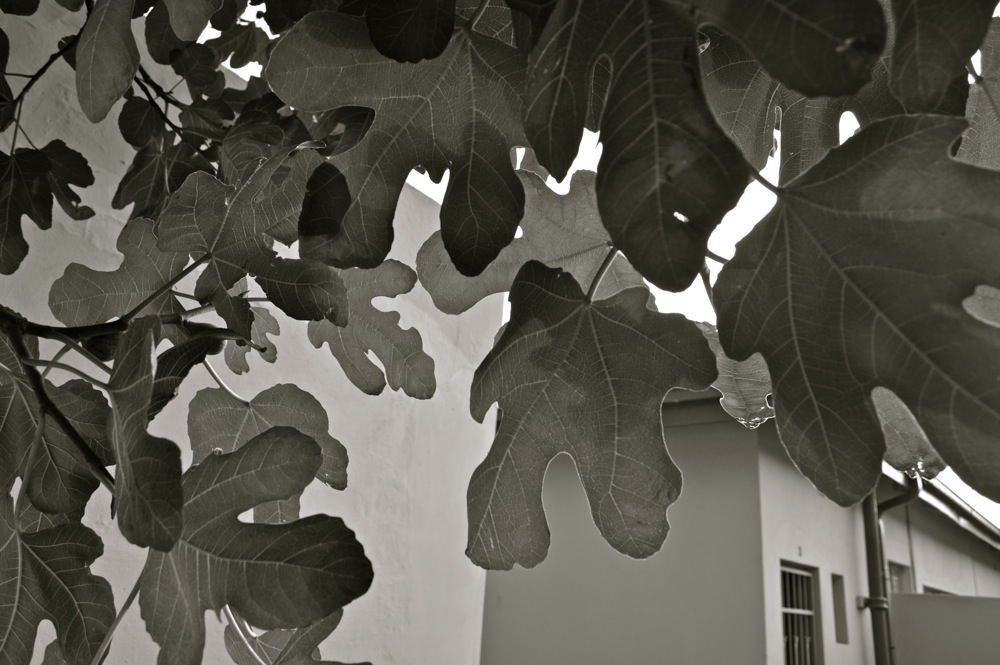 I never expected the air to be so chilly. I set off on foot for the nearest shopping centre, on a mission to buy a universal adapter for my various gadgets and gizmos, and also a South African sim card for my brick phone. My hostess—who seems a nice lady, otherwise, and very helpful—gave me a street map with highlighted areas that she said were “black areas”, and told me to avoid them. She also told me not to carry my camera openly on the streets because of “the blacks”. How do you use a camera when it’s in a backpack? I set off, and noticed right away that I was the only “non-black” walking. 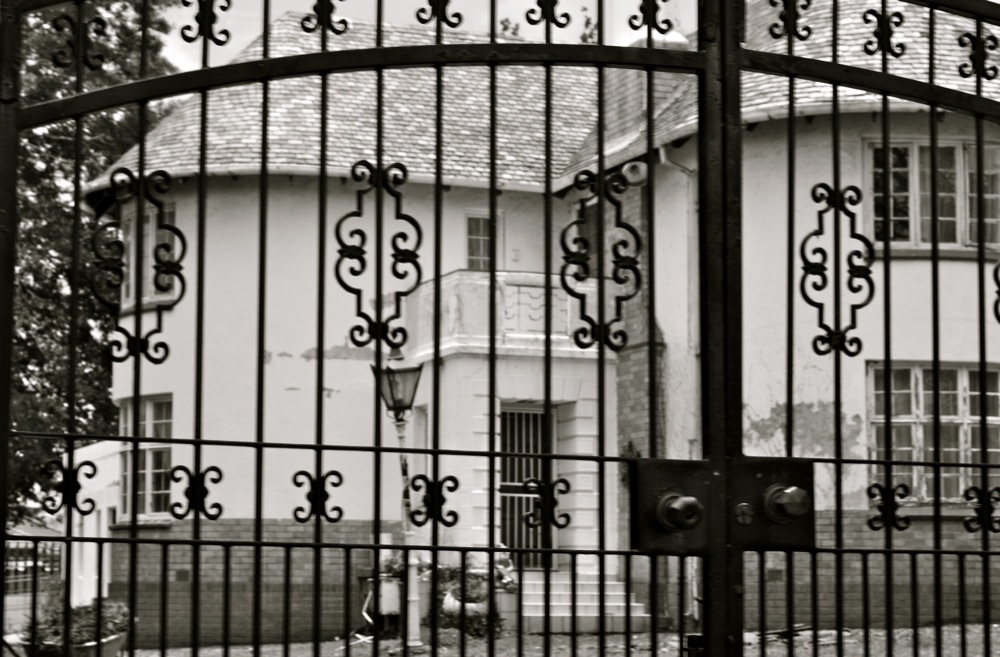 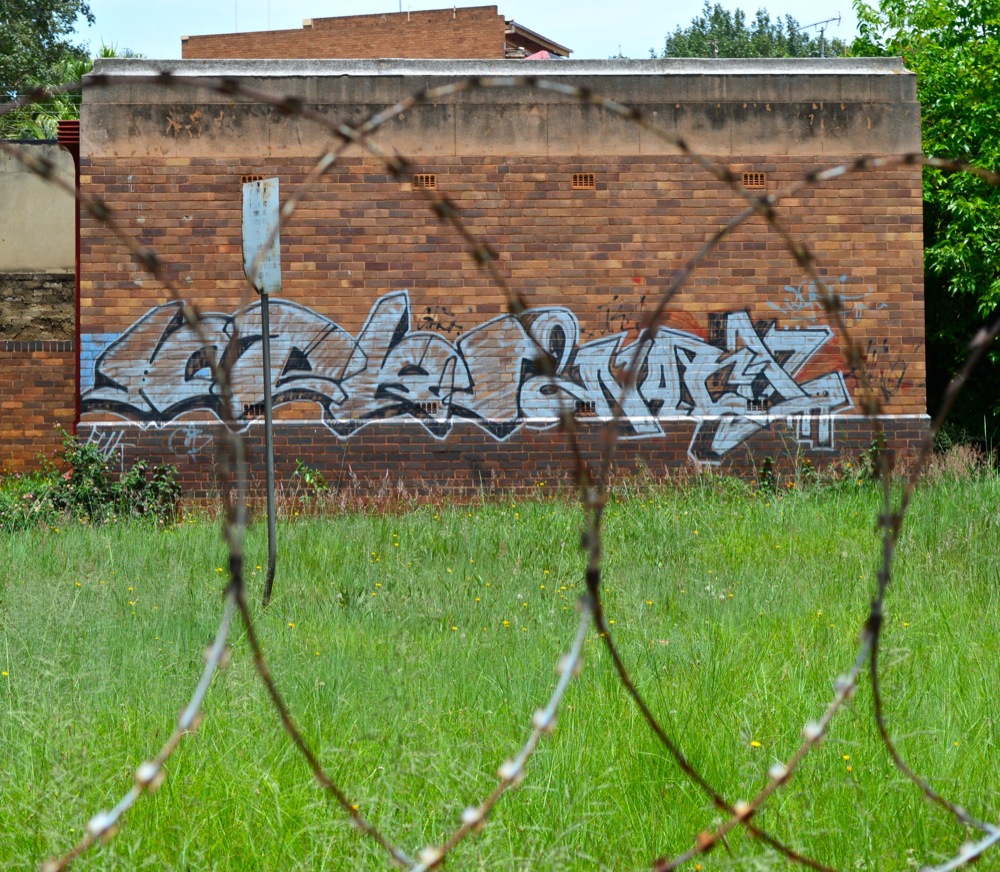 But everyone I came across said hello, and when I stopped to ask for directions people were gently friendly and helpful, and whole gangs of construction workers or ditch diggers called out “Good morning!” I never felt threatened or unsafe. 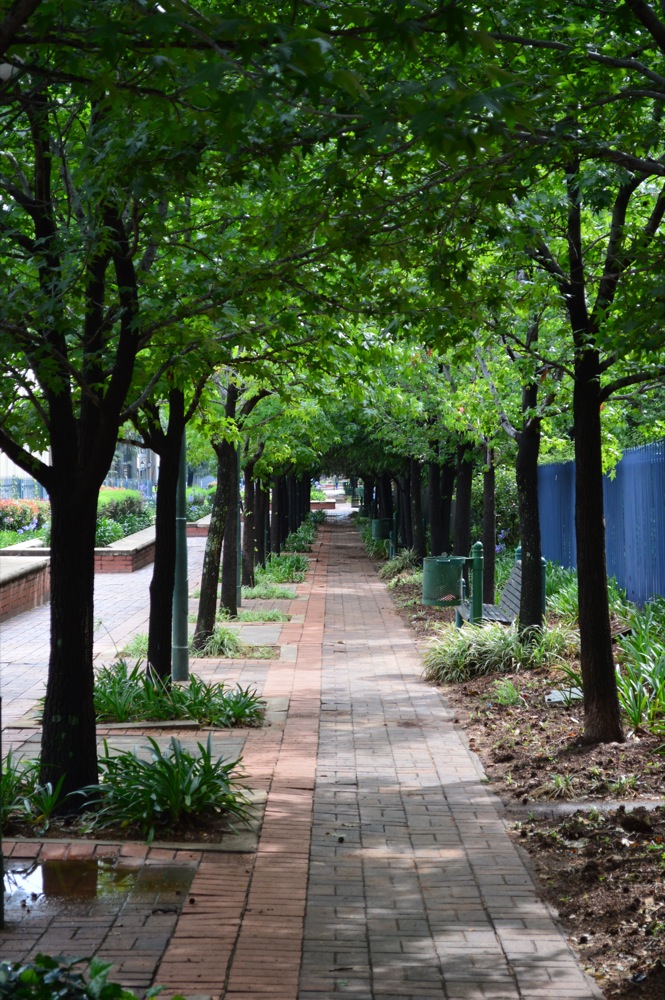 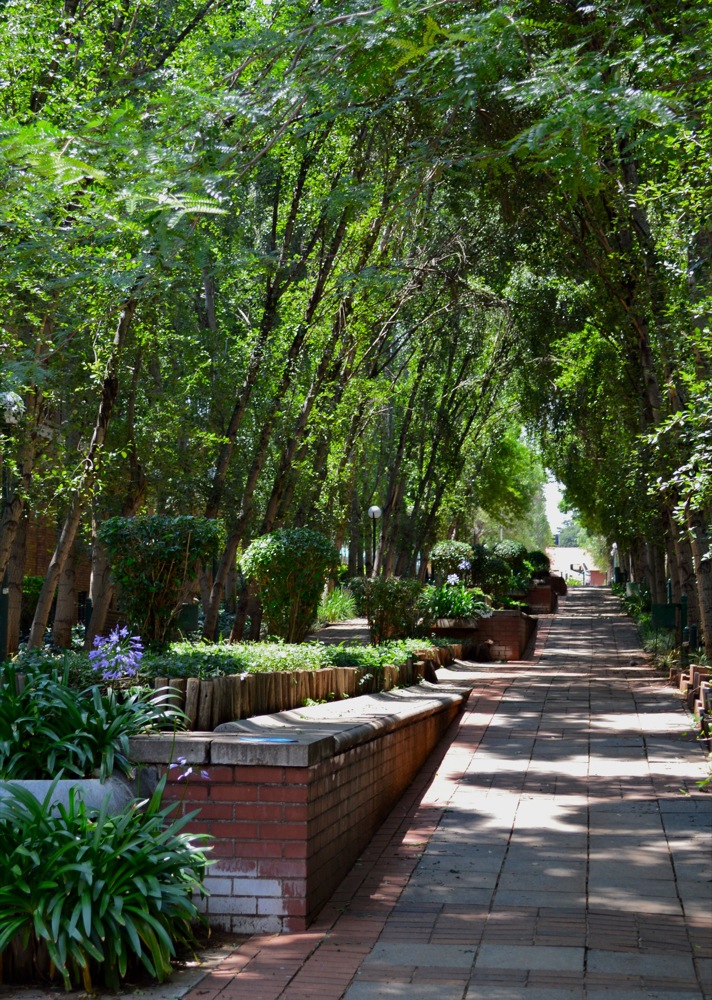 The air was so dry and cool, it was a pleasure to walk the 4.8 km. to Eastgate, except that half the walk consisted of a very long, very steep hill going UP, and the other half was a very long, very steep hill going DOWN, and my knees and feet were killing me! I stopped to rest often at many beautifully maintained parks and promenades along the way…the Agapanthus lily was EVERYWHERE. 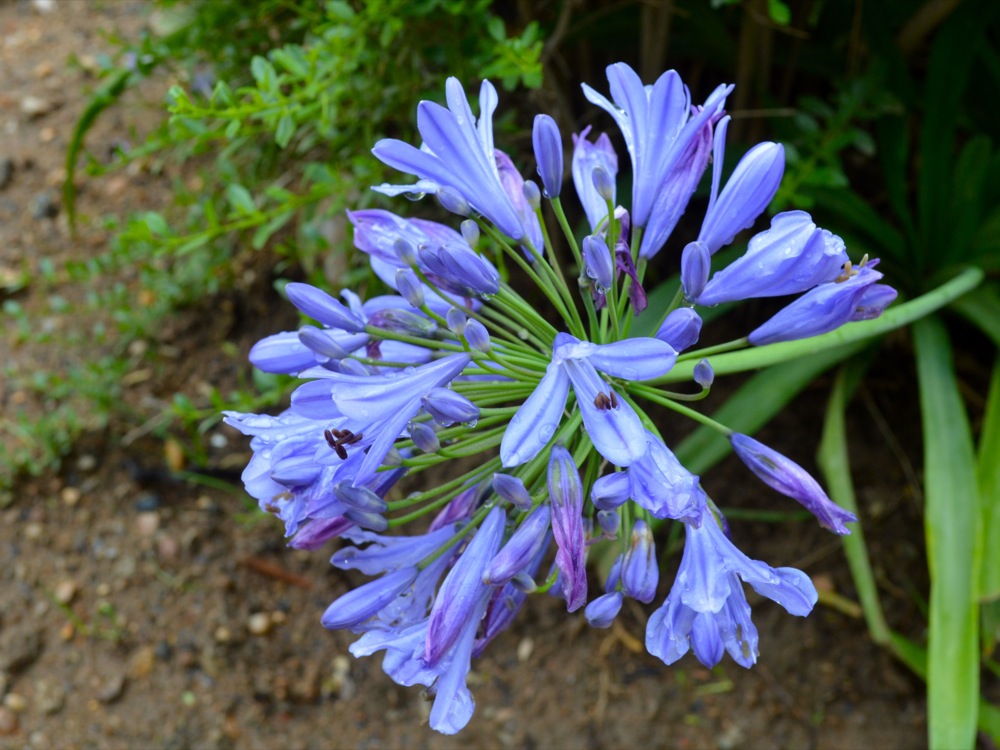 At some point, I came upon Joburg’s Chinatown. I love Chinatown…it’s not a place, really, it’s a state of cultural being. No matter where one goes in the world, it seems, the Chinatown is essentially the same, and therefore a comforting, familiar place to be. 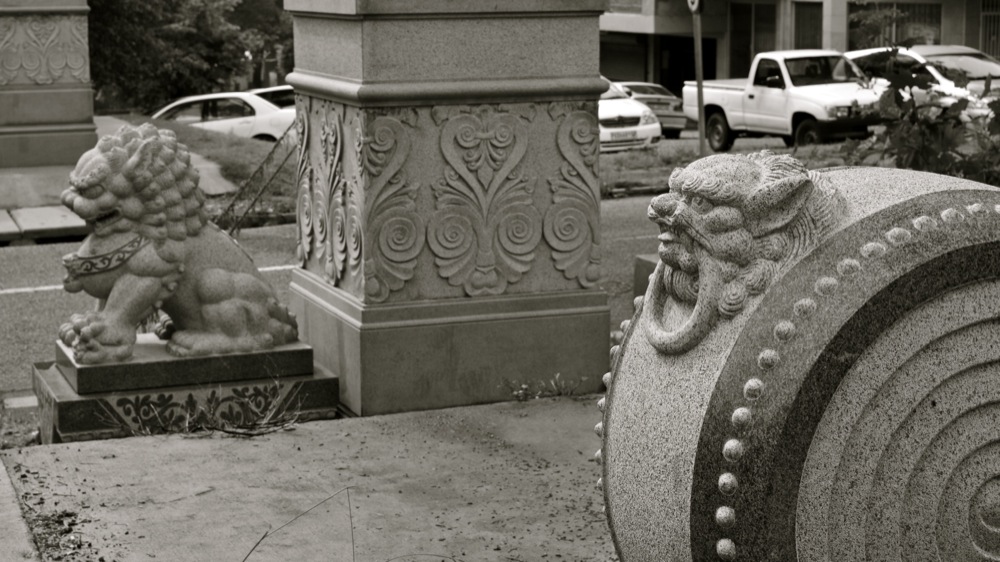 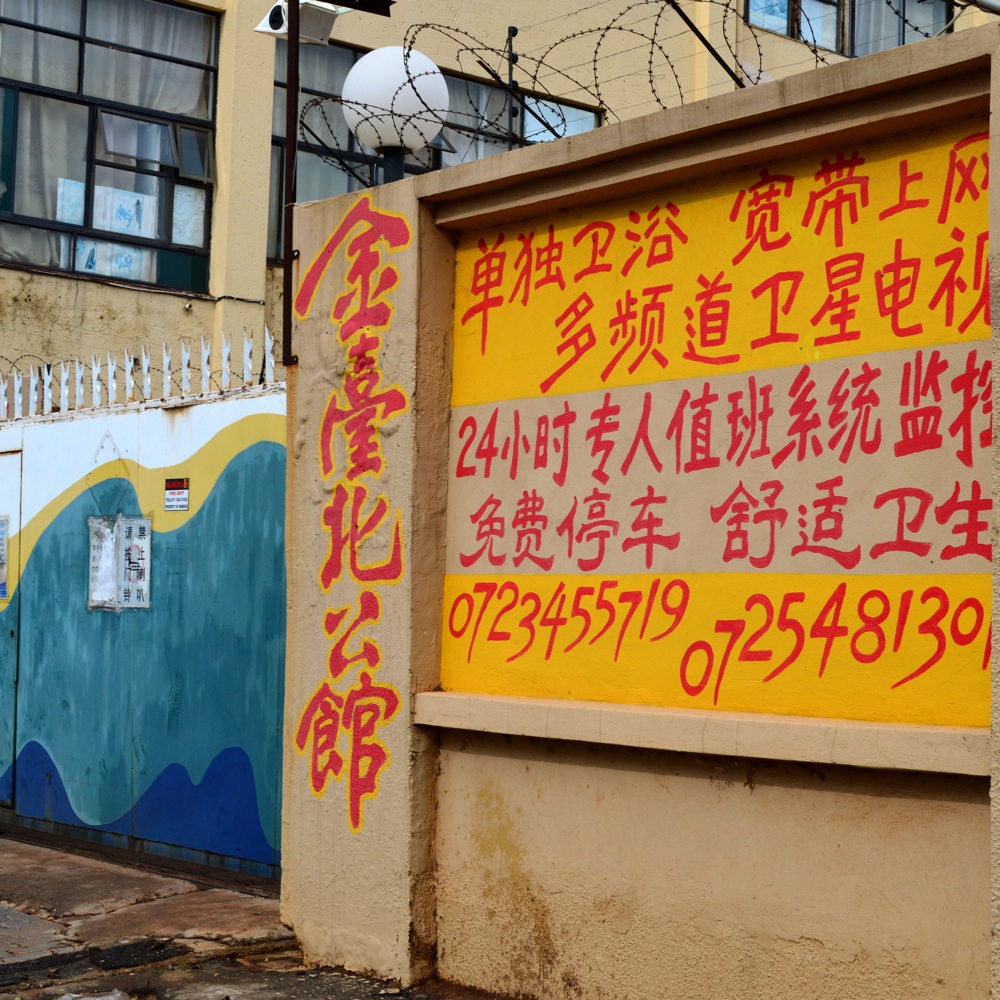 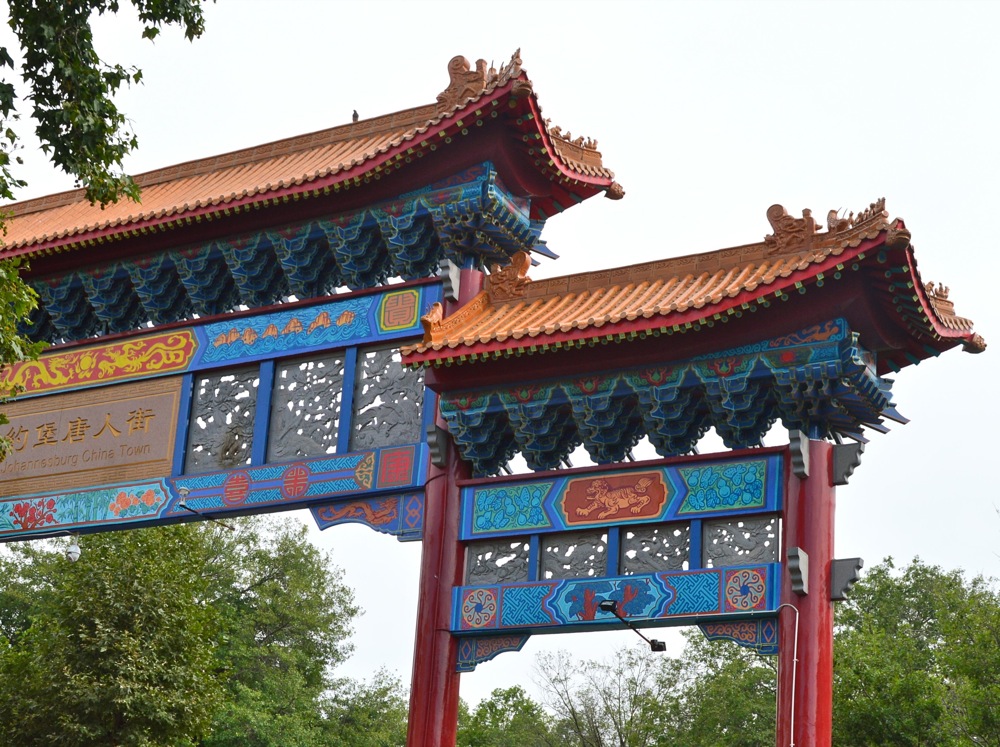 At the shopping center I found my adapter, but no luck with the sim card because I hadn’t thought to carry my passport with me, and you can’t buy a sim card without ID here.
I had a big breakfast and excellent coffee at a place called Nino’s. It was 8 in the morning and most of the shops in the mall were not even open yet, but the smoking area at Nino’s—a little glassed in room to one side—was packed with fat old Italian men. They were set out in twos and threes, at different tables ranged around the room, but were all engaged in the same conversation. I really had no choice but to eavesdrop, since they were shouting across the room at each other. The topic of conversation was one that fat old Italian men probably started in the 1600s, and have carried on with until the present: “Things just aren’t the way they used to be…back then, life was really good. Today’s world is shit, and nobody is doing anything about it. Italy, of course, is still the best country in the world…” I think someone should make a recording of this timeless, monotonous conversation, so that cafe’s everywhere in the world can play the track continuously, and save the fat old dons the trouble of opening their mouths.
I could not resist a few pieces of Zulu beadwork, for sale at the Bruma Lake flea market, and these were my only concession to the world of souvenir shopping. 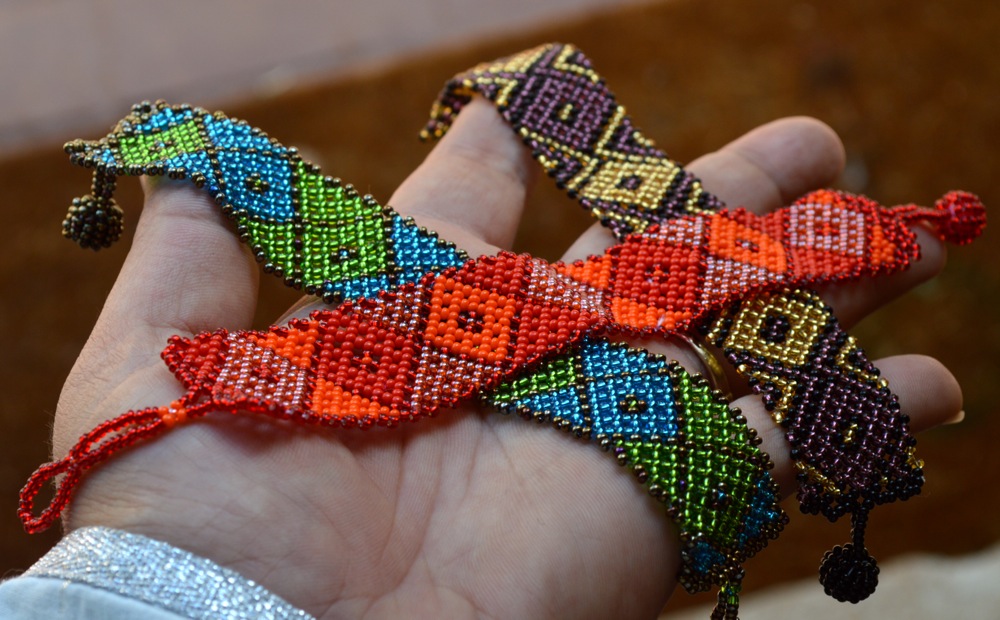 Back to the lodge by 1pm, to shower, change, and share my lunch—a box of nectarines, some freshly baked loaves of dark bread, some nuts and dried fruit, a tin of sardines in olive oil—with this fine-looking fella here. He liked the sardines, of course, but also the roasted almonds. Lupo di delicatessen. 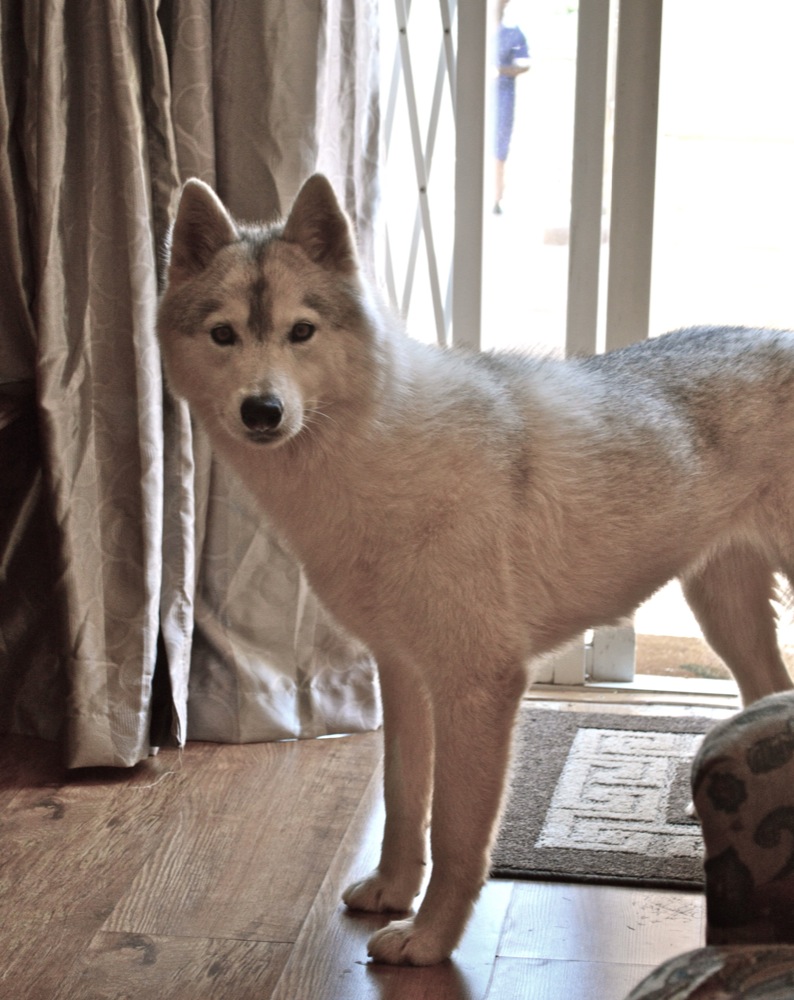 After lunch, I drag a chair out into the courtyard, to sip a coffee and smoke underneath a small fig tree growing behind a garden gate that leads to the staff members’ quarters. 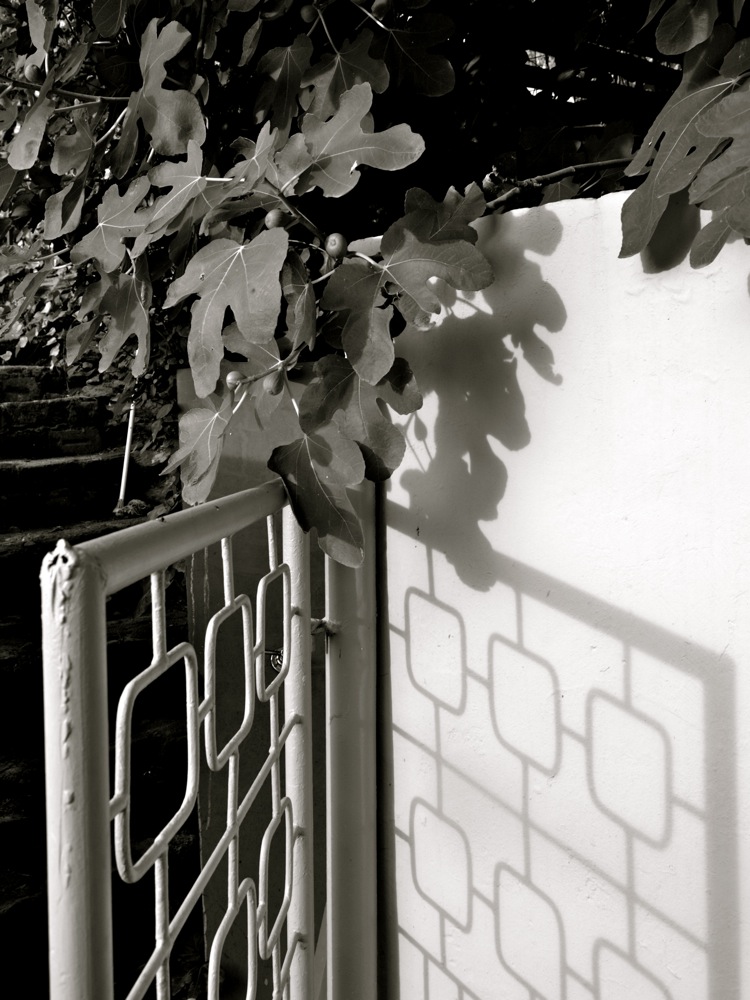 That brisk walk up and down a mountain (that’s how it felt to me!) has tired me out and I will happily fall into my huge, soft, clean, fluffy white bed, to sleep through the nightly torrential downpour and mighty thunderstorms that rake across Joburg at this time of year.

Tomorrow I am heading, very early in the morning, back to the O.R.Tambo airport, for the last day of my journey toward Kris: a flight to Capetown, and then a taxi to the Saldhana Bay Yacht Club. 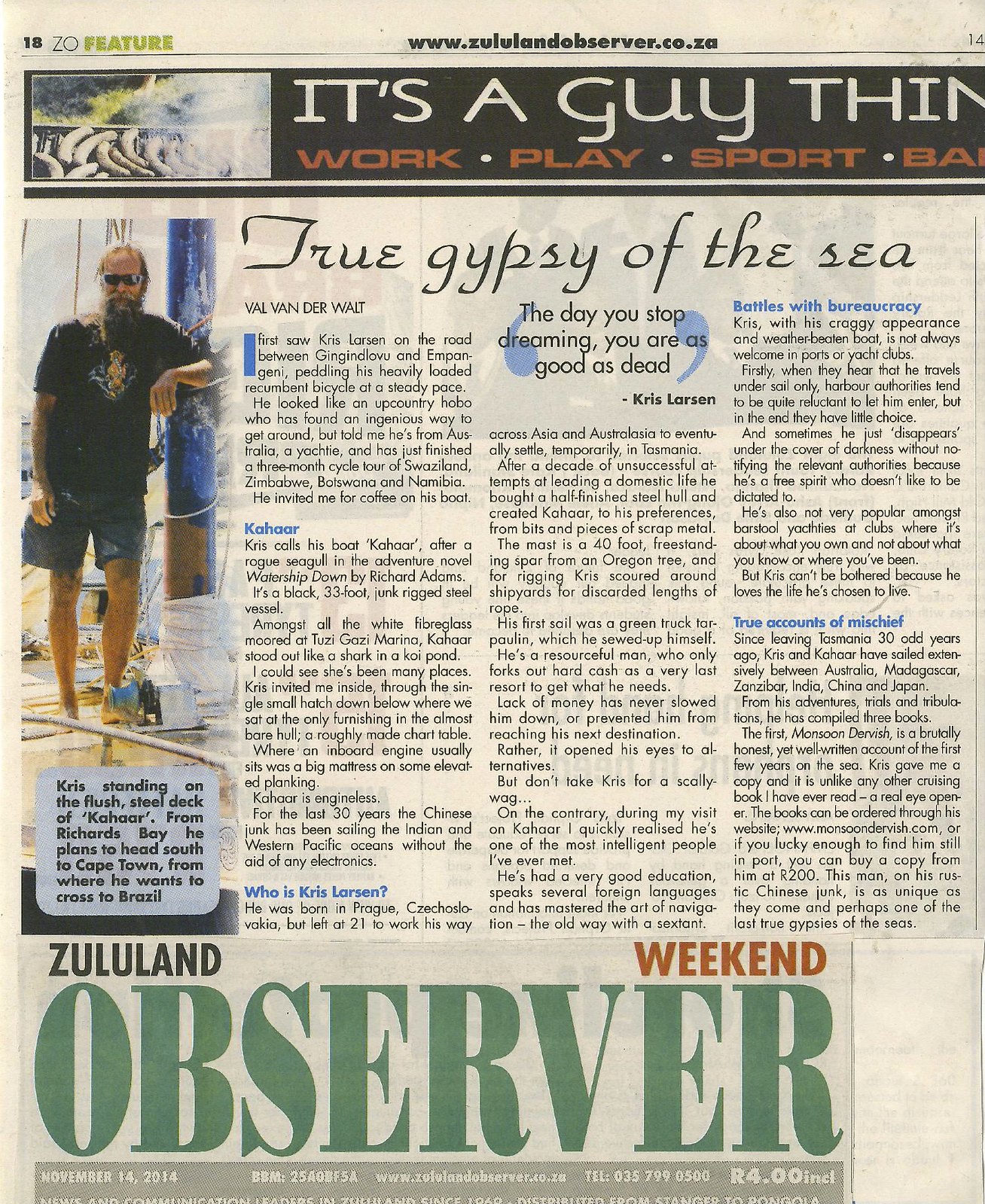 In my inbox tonight…an interview with Kris by Val Van der Walt of the Zululand Observer, November 14. 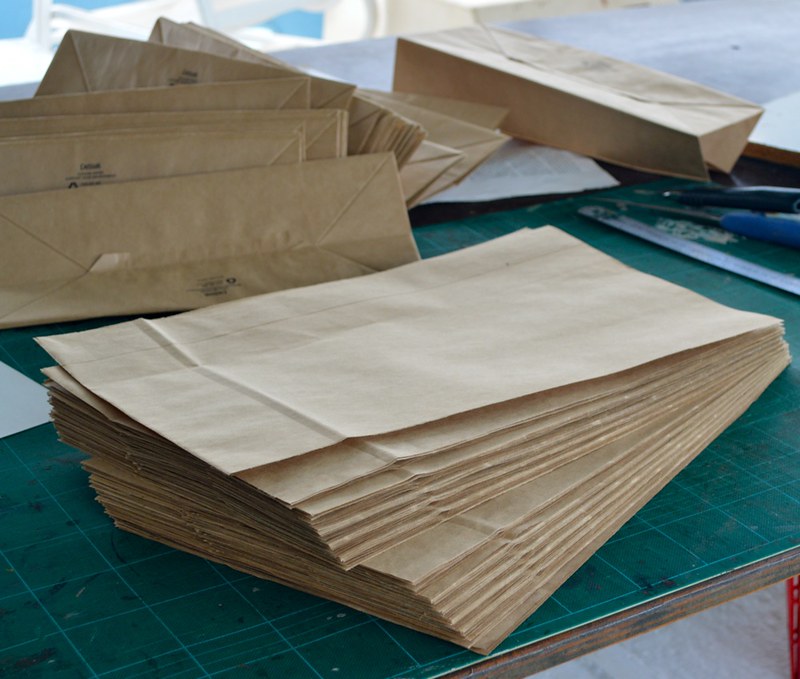 I have wanted to do something about this stack of large, heavy-duty brown paper bags—the kind that you get your bok choy and bananas in, at a farmer’s market—that I carried home from some yard sale ages ago.

Today I cut the bottoms off, leaving a kind of paper ‘tube’; I then slit the tube with a large kitchen knife at the side folds into two pieces, cut the resulting two sheets in half once more, and then folded the sheets, ten at a time, to form signatures or sections. A few quick stitches using heavy linen upholstery thread, some cloth tapes cut from a scrap of printed cotton, some glue and half an hour under the press. Just like that, I have two brown paper books, a hundred leaves (200 pages) in each. I may, or may not, worry about covers (I’m a bookbinder. That means most of my own books spend their lives half-finished and coverless…) 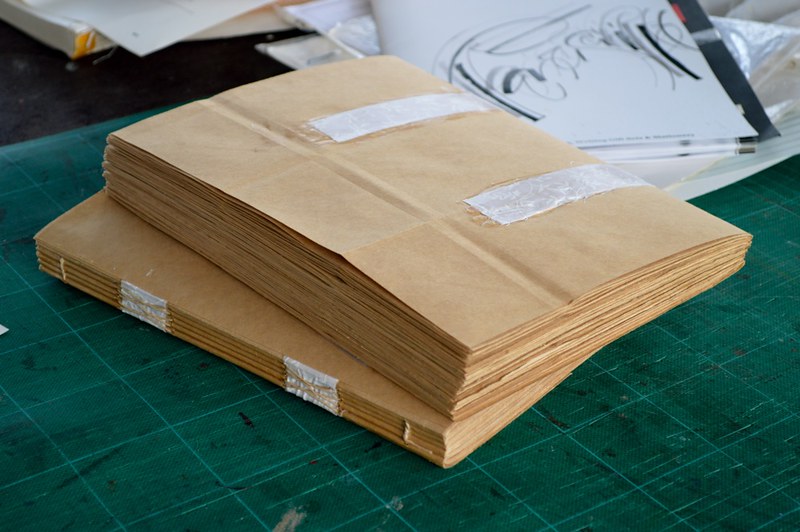 I have a lot of good art papers, and at least a dozen hand-bound drawing and watercolor sketchbooks, to take on my travels…but I needed some scribbling-and-doodling books that didn’t feel precious; made of the cheapest possible paper and roughly sewn together, so that I wouldn’t be afraid to waste the pages, to draw and write utter garbage, to jot down phone numbers and shopping lists. I like that the pages in these two books are creased. There are some stains and spots where the bags got rained on last year. I even left the double-thick strip—where one side of the bag was glued to the other—to form a margin on some pages.

Often, it is in such cheap and accessible books that the best work gets done. The mind is so strange. 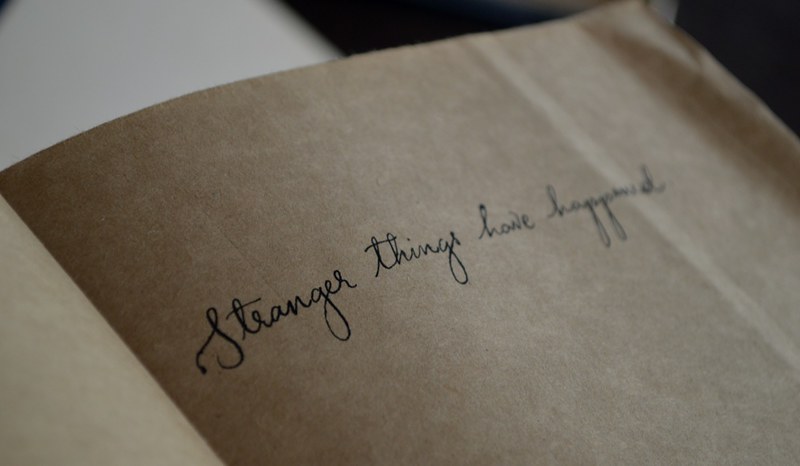 I began to test various dip pen nibs on the rough, hairy paper, trying to figure out which nib would work best. This random line from an audio book—Roberto Bolaño’s The Savage Detectives—I was listening to as I began to write appeared on the first page. I guess I have unwittingly named one of the books… 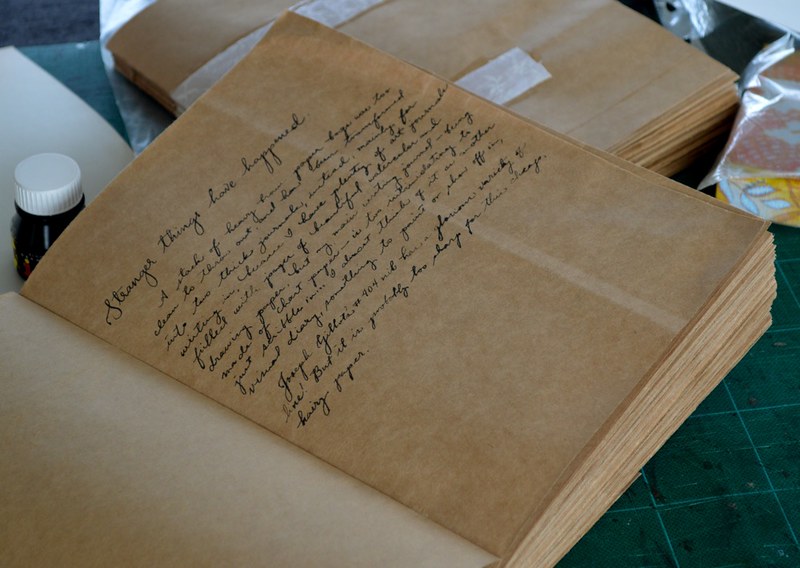