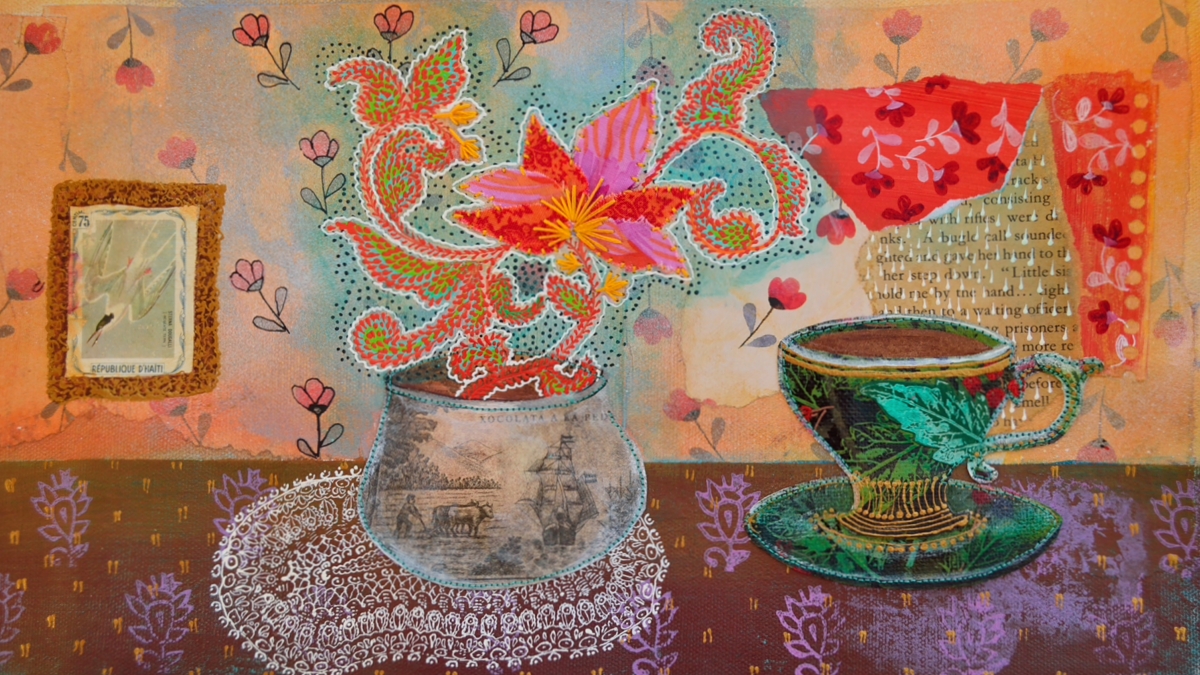 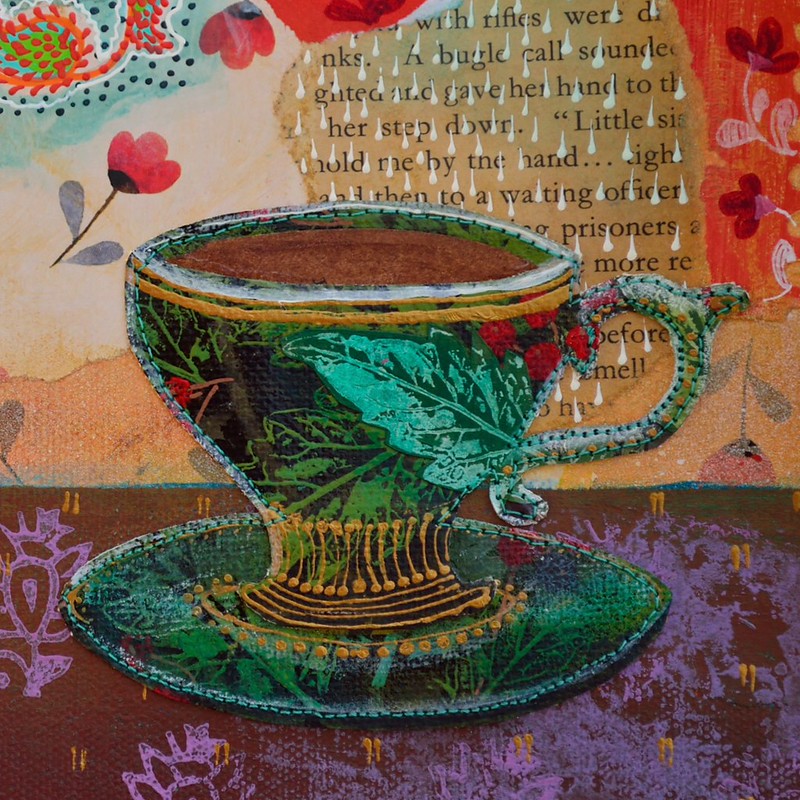 Getting started was hard—I am rusty at designing bookcovers (the extra-wide format, and one must always bear in mind that the cover will fold, later on, to form front and back covers, plus a spine.)

These teacup ones are especially baffling, because  they use so many different mediums (layering, sewing machine appliqué, paint, spray paint, collage, painting, embroidery, stamping or stenciling…for this one, I also printed the teacup with fresh leaves) but after a few false starts, I have finally found a rhythm, and the other 8 books are coming along more smoothly than this one did. They aren’t all of teacups. 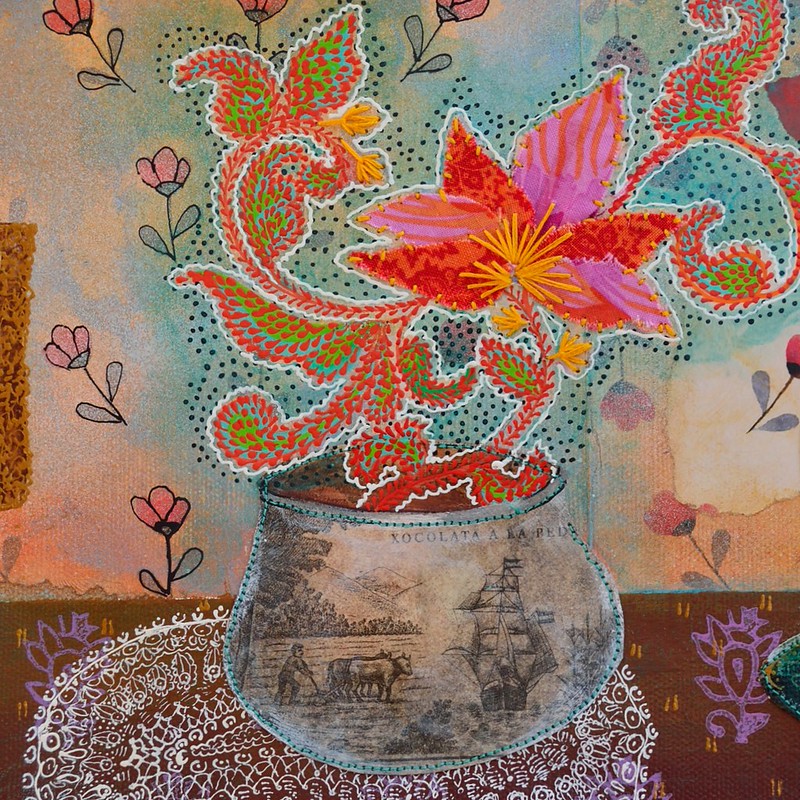 I named this book after Barcelona, because of the Barcelona based chocolatier, Simón Coll’s, chocolate wrapper used for the flower vase. This chocolate bar wrapper design has been in continuous use since 1880. 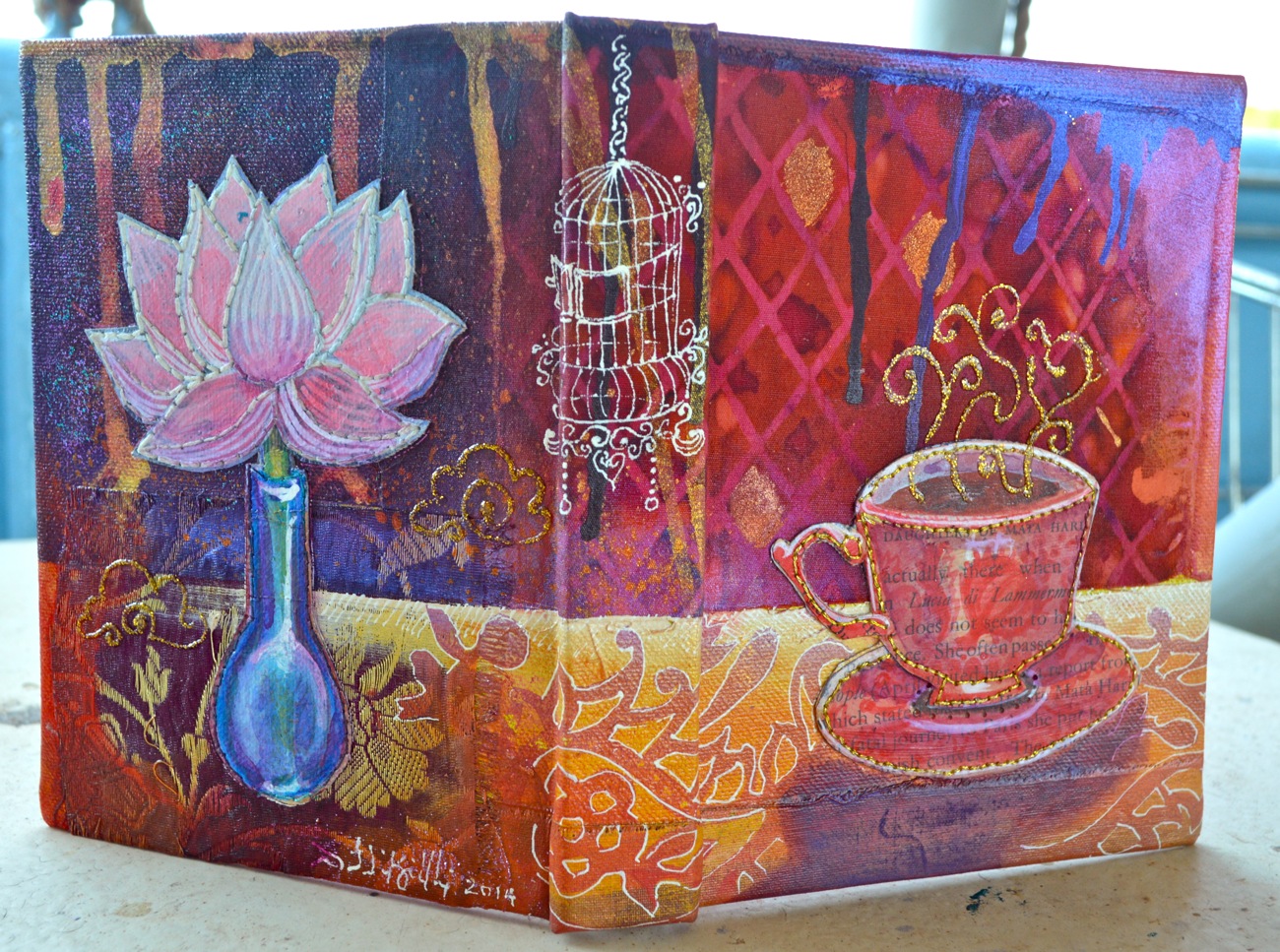 In the grand old tradition of Western-made chinoiserie, it’s a little bit of a hodge-podge of Oriental stereotypes, rather than anything correctly Shanghainese. Awkward cultural appropriations, I’m sorry…the journal has more in common with this Manhattan Transfer song (but then, that’s Singapore…what a dog’s breakfast I am making of this!) than real places.

These babies are ready to go to Finland. 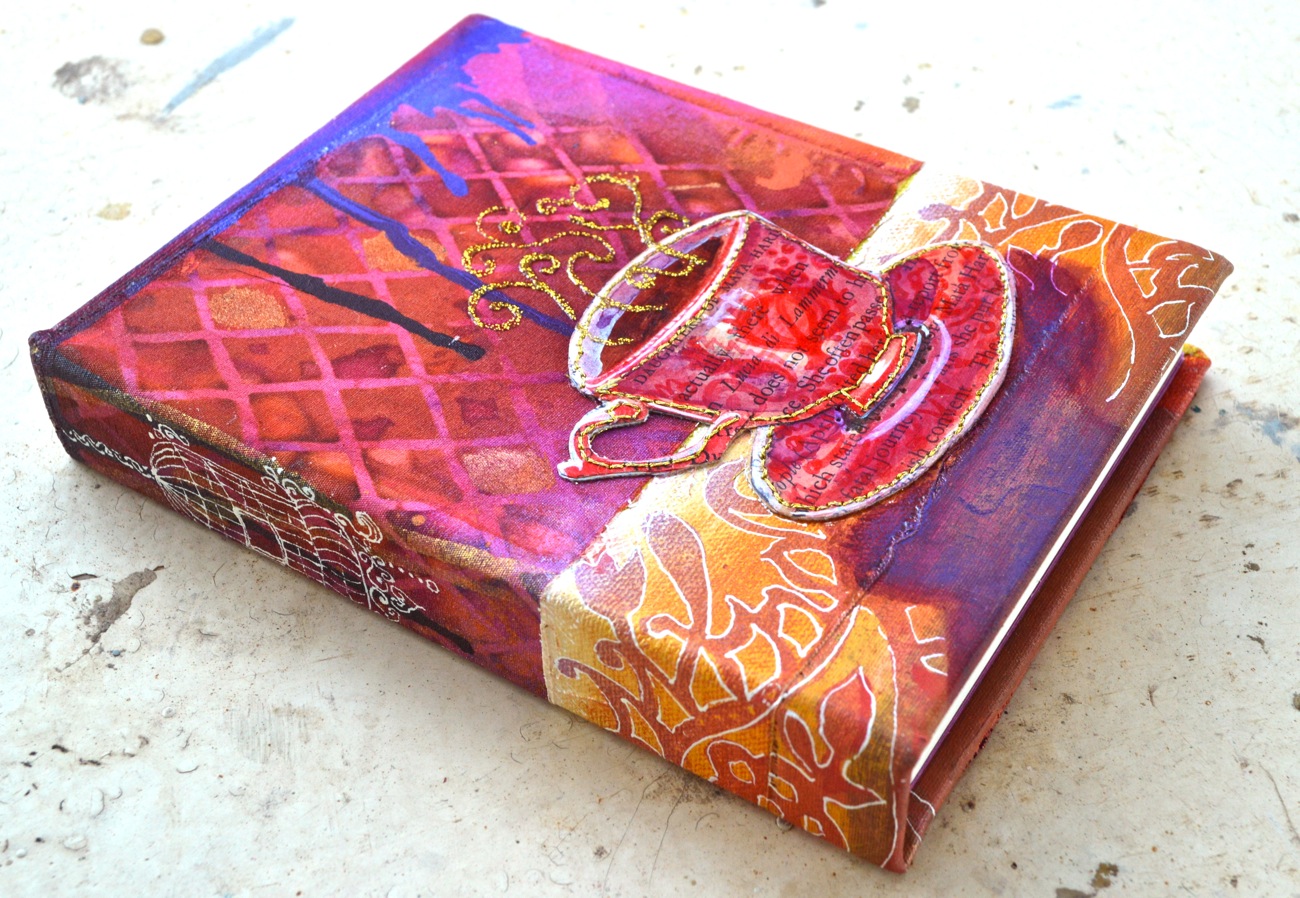 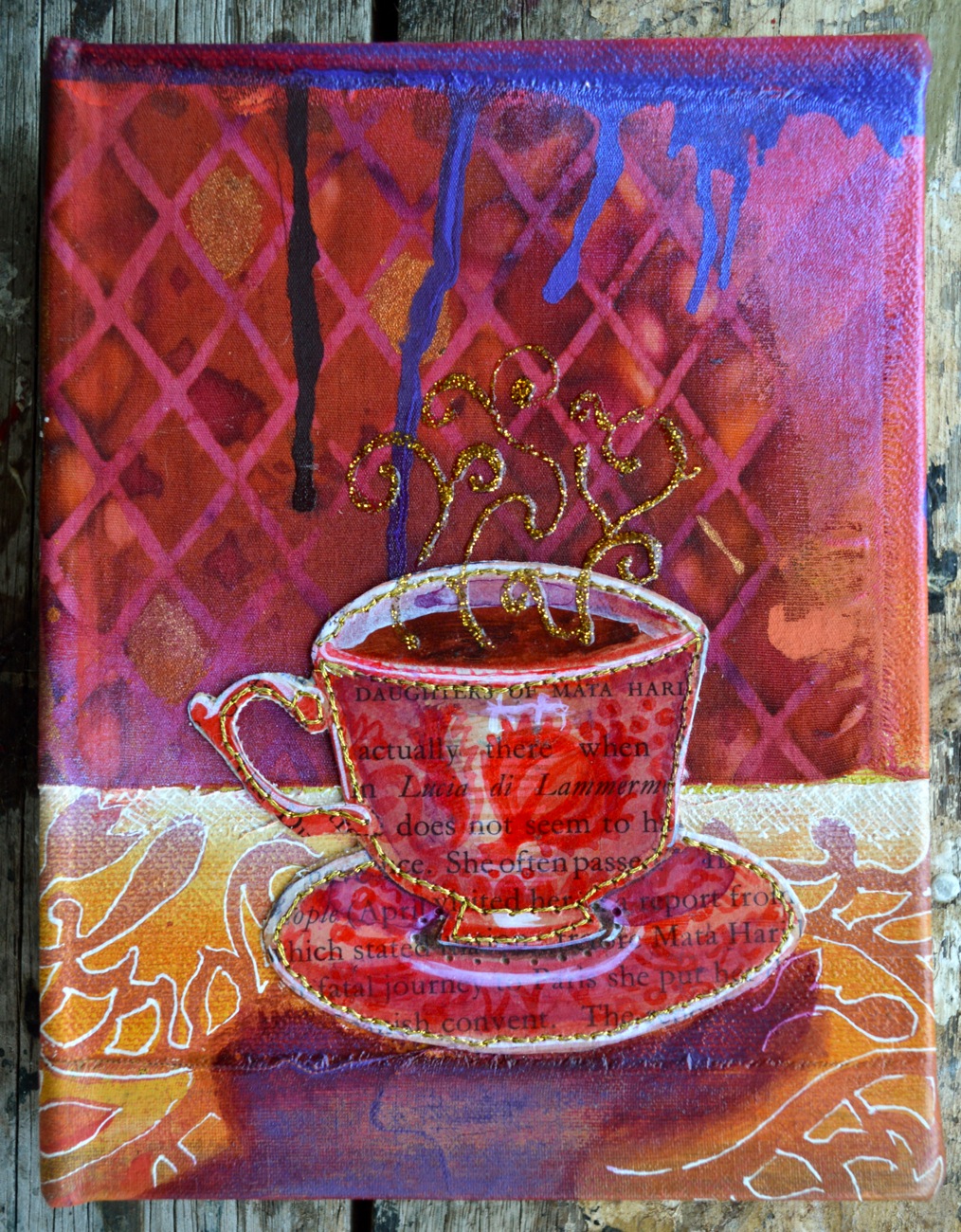 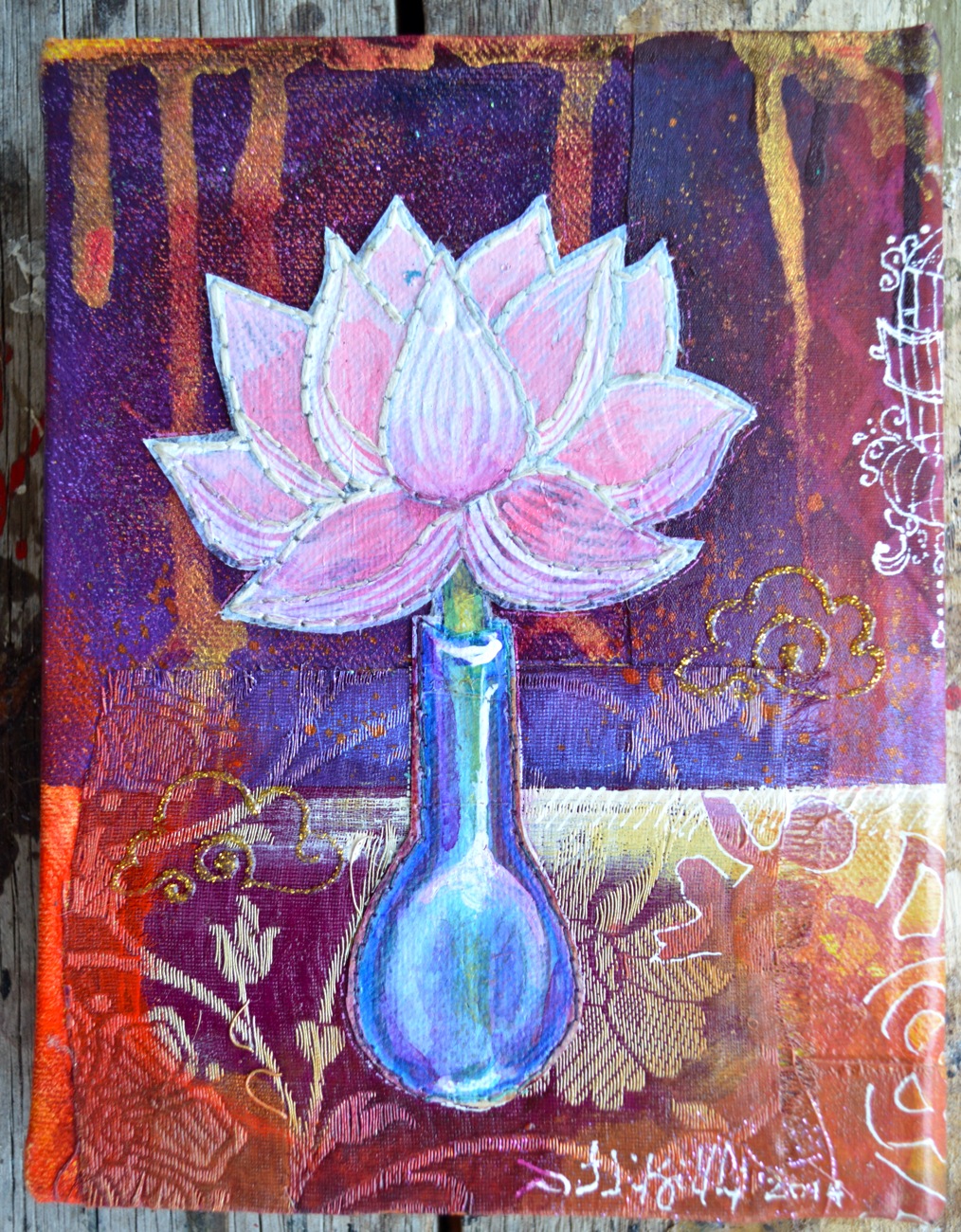 More tea, so forgive me.

In the sun-filled solarium, this time, surrounded by hothouse ferns of wild purple hue. Another tea-stained page taken from the fantastic, mostly fanciful, life of Mata Hari…and the golden walls are peppered with tiny mauve stitches…

I scanned at higher resolutions, this time, and the file was big enough to put on throw pillows and other things, for once. Learning. It never ends.

These are available from—where else?— society6, as always, and their sales special—$5 off each item, plus free shipping worldwide—is still going. Makes me wonder if they ever turn it off. I’ve gotten so used to the great prices that I’ll probably become depressed when they finally do go back to regular pricing… 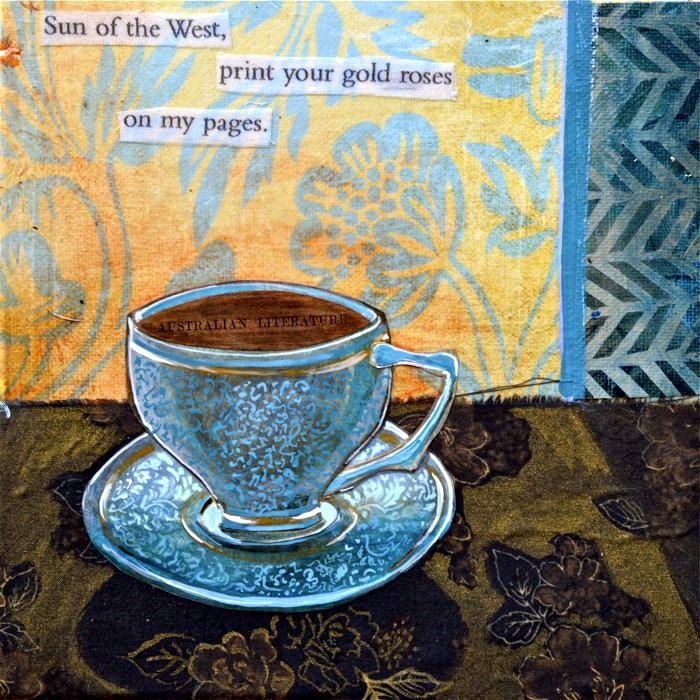 Gold Roses of the Sun…a one-line poem from Monochords by the Greek poet Yannis Ritsos; a teacup inspired by Islamic tiles, a tea-stained page from a book about Australian Literature…

Still making teacup illustrations. I have done 7 or 8, now. It’s impossible to paint teacup after teacup, and not get fancier and more ambitious as I go. I really can’t repeat a series of steps over and over, it bores me silly…I don’t know how other artists do it! For me, every teacup has to trump the one before; I have to accumulate what I’ve learned previously, and bring that to bear on the next illustration. Eventually I will hit a ceiling, where my teacups (or anything else I’m illustrating) become so baroque, so slick, ornate, and extravagant, that they are monstrous and kitschy, and the balloon I have been soaring in pops, sinking slowly back to earth again.

The Sea Dog’s Teacup, below, is maybe two or three cups away from that point at which my designs and ideas will collapse under their own weight. Still, it was fun while it lasted, and I loved, loved, loved drawing the seascape and albatross on the side of the cup…as well as the magic realism of the sailing ship inside it.

And just for fun, I’ve posted it on Society6, as well (everything I make, pretty much, is going to go on there from now on…sorry if it gets boring, but a girl’s gotta pay for her art materials and South American adventure somehow! 😉

So far I’ve shown you Kris’ marblings…he took a month off from work, so he’s had more time to potter around at home and throw stones (I’m so jealous!) while I have only managed to squeeze two days of marbling into the past month, so far. But the stuff in this post is mine.

The weather has been inclement—cyclone warnings, squalls of wind-driven rain and rolling seas have prevented us from marbling this weekend—and it’s exasperating to have the looming show date pressing in upon us, and not be able to make more pieces. Instead, I’ve tried to do something productive with whatever’s on hand:

Pieces of marbled cotton (more of those white bedsheets that we pulled from a hotel’s dumpster…I don’t think I will ever get through them all) got stretched over small wooden stretcher frames, and a bit of embroidery added to them…

I also made really good high-res scans of the marbled fabrics; you never know, they may come in handy, someday.

Hello, sorry It’s been so quiet on here. I’ve been quite busy making stuff…just didn’t remember to take pictures of anything I was doing, hence nothing to show you or blog about.

Yesterday I started working on a series of mixed media journal covers because I visited my own ETSY shop a few weeks ago, and things were looking very, very lonely and neglected. I am trying to get back into bookbinding now, because I have a dozen or so text blocks of beautiful paper all bound and ready for covers. The covers are always the hardest part (but also the most fun) because I don’t like to repeat myself, and I tend to get stuck for a long time, fiddling with tiny details on every single one.

The subject of this batch of journal covers is tea time; this one’s predominantly lavender. The base is painted artist’s canvas. I’ve used various papers—tea stained pages for the tea cup, and my own marbled paper for the tea, some gift tissue—and bits of fabric. Machine as well as hand stitching. Acrylic paints (and some dimensional glitter paint), acrylic inks, and some shading with colored pencils.

What have you been tinkering with lately?