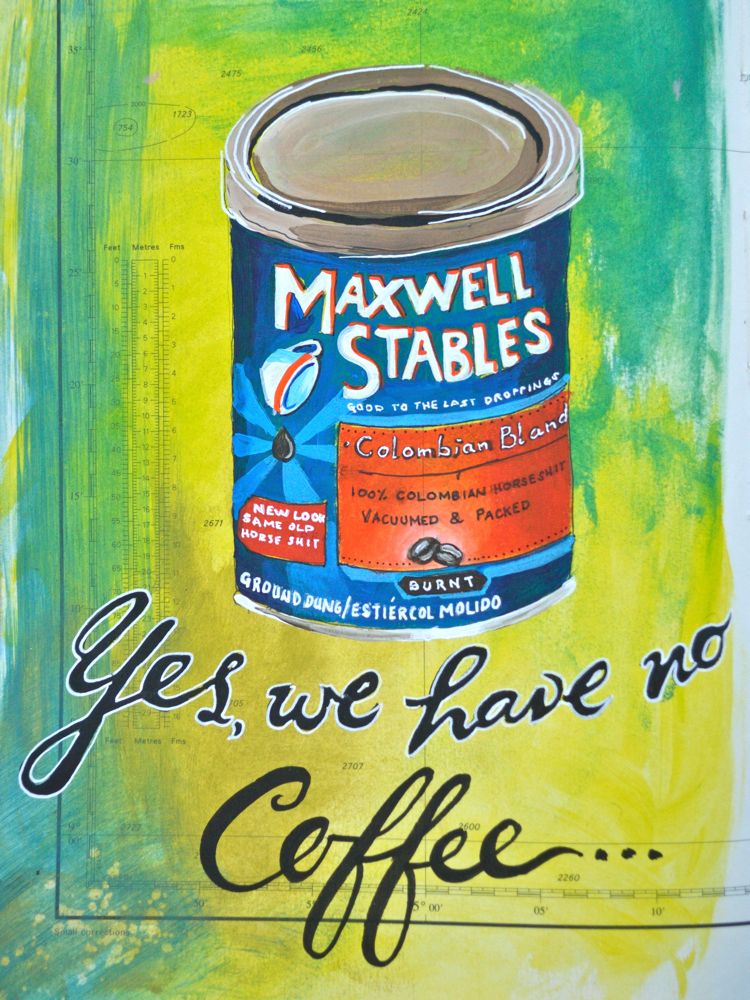 It’s never a good idea to have expectations when you travel; we broke this cardinal rule when we sort of allowed ourselves to look forward to the coffee in S. America. So far we have had no luck finding decent, locally-grown arabica beans. Neither Brazil nor Guyana had any decent arabica for sale. Everywhere we went, soft bags of dried-out, burned-tasting, robusta coffee were the norm. Dreadful stuff.
Now we are in Grenada, and the chance of scoring decent arabica are even slimmer here. The supermarkets have precious little in the way of real coffee (Nescafé has invaded all these countries…you even get instant coffee at fancy restaurants!) and what few bags of ground coffee are available are robusta (robusta is a high-yield, low aroma, low-flavour, high-caffeine crop…most countries grow robusta, now, because Nestlé is their main buyer, and Nescafé is made only from robusta).

It’s really disappointing…the local stuff is overpriced, and gives us palpitations, and doesn’t smell or taste like anything but strong dust. In desperation, we bought a tin of Maxwell coffee (the label on the back says “100% coffee”; that’s like buying “100% wine”, the quality could be anything!) but it’s no better than the local stuff, and more expensive to boot.

Hoping and praying that Cuba has better coffee, though we won’t be in Cuba for a long while, yet. Oh, well, I guess it’s time to check out the teas in Grenada… 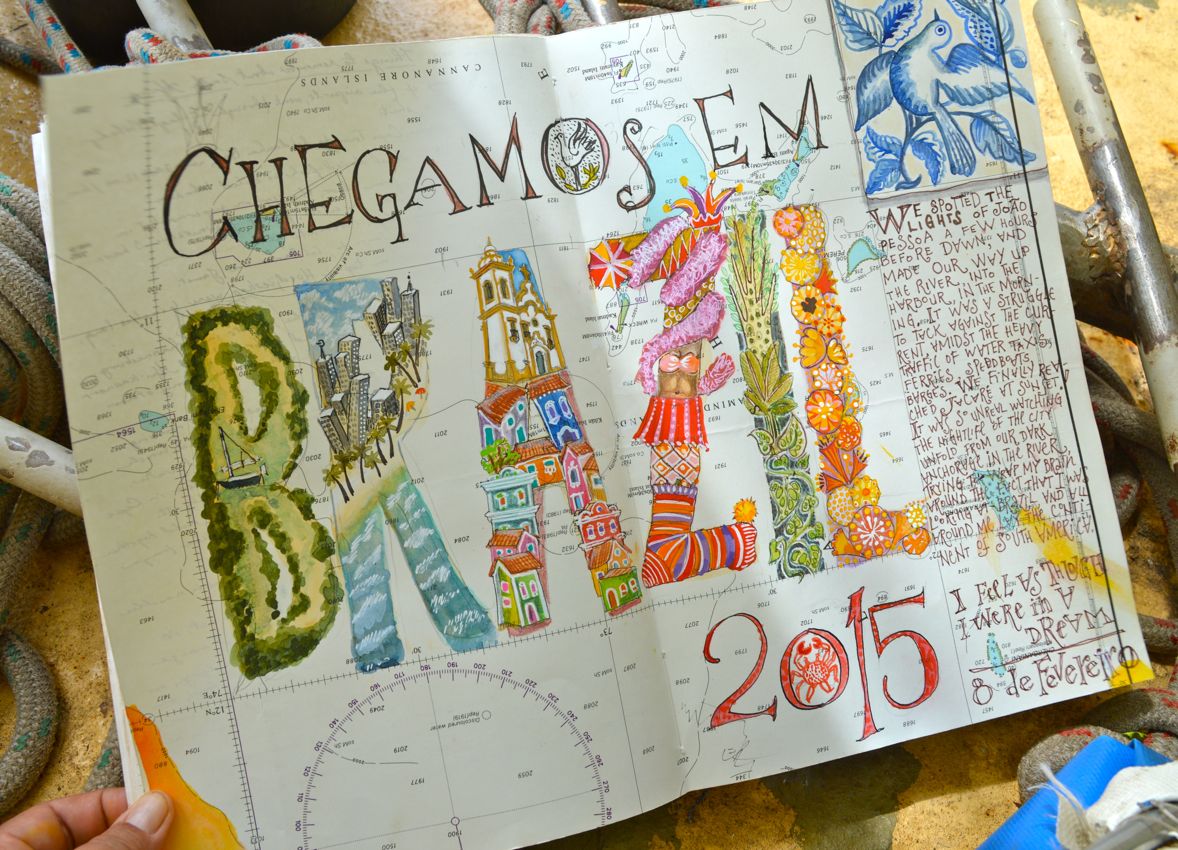 Started this two-page spread the day we arrived, filling in each letter as I experienced more of the place. 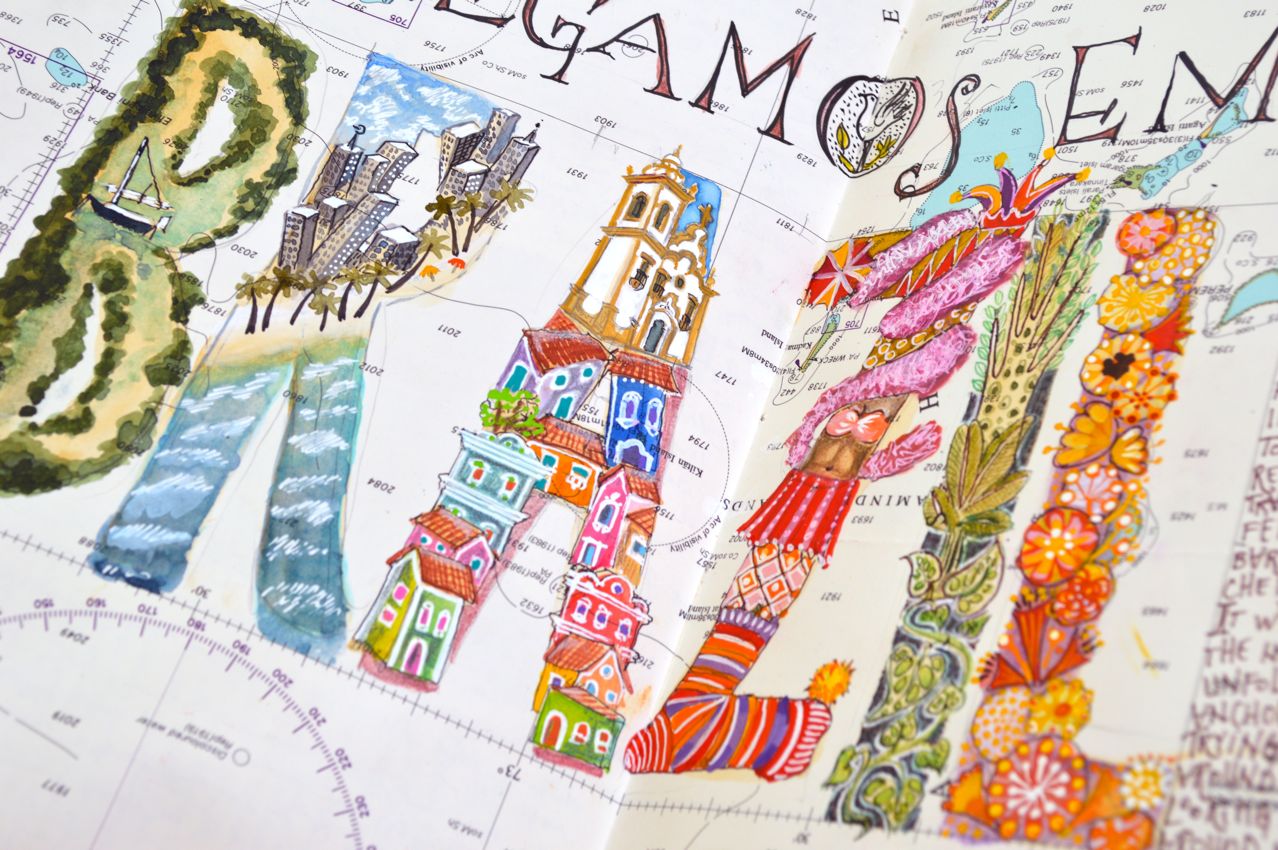 P.S. The Wi-Fi at the marina we’re using as land base is terrible…I have had to scale the quality down of my uploads. Sorry ’bout that. 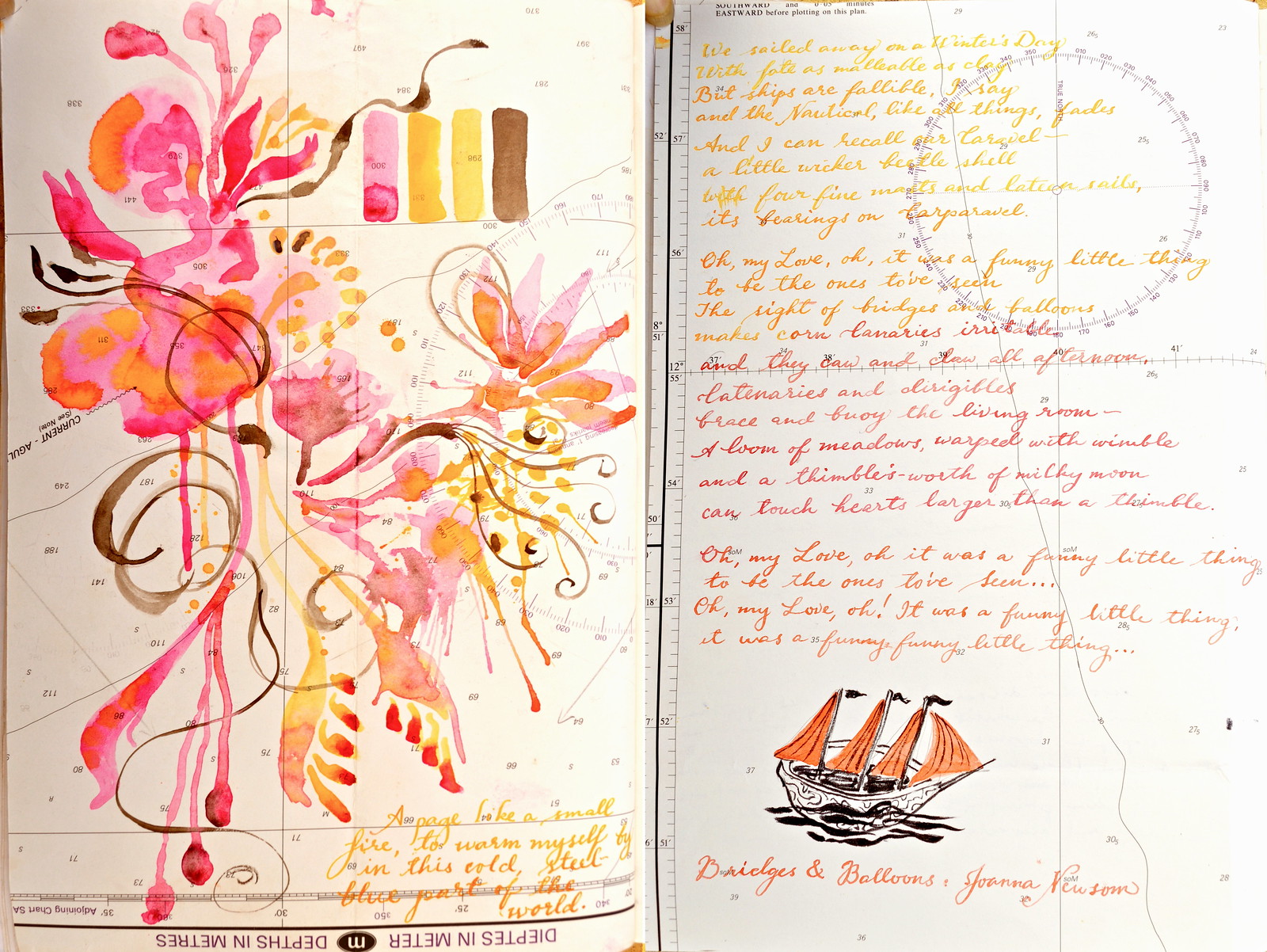 Just filling a deep need to see hot colours. The 25th was grey, cold, and it drizzled, so it was extra dreary on the water. F**k this for the middle of summer.

I painted wet blobs of colour in my journal as one might stoke a small fire in a brazier, trying to get warm. 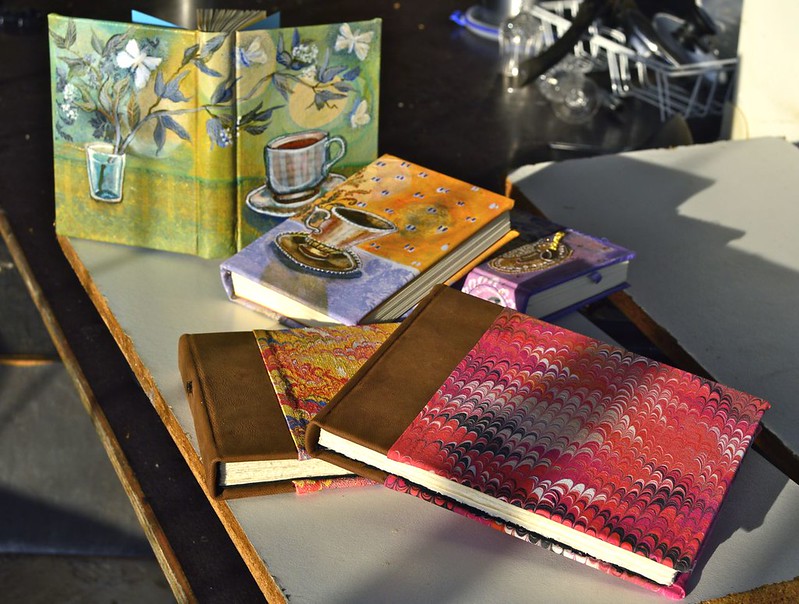 This small handful of journals and watercolour books that I put together yesterday spent the night tightly clamped between smooth, hard boards…like unruly winos locked up for their own safety.

A favourite way to start the day is to pour a cup of coffee and sit in the breeze on deck as the sun comes lancing over the tops of the mangroves, and release the previous day’s work—what was a loose and motley collection of disparate pieces held together with runny glue and faith in the powers of synthesis—from the grip of the press, to find that everything has come together with a grace and finesse that still takes my breath away. 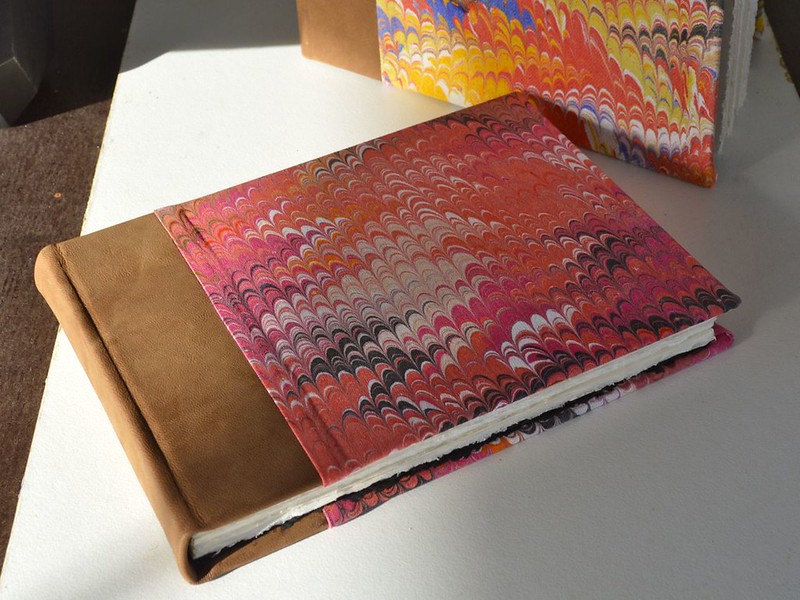 Yesterday: paper, thread, fabric and leather scraps, glue, grey-coloured board.
This morning: a dense, well-made, glowingly beautiful book that feels precious as it sits in my hand. 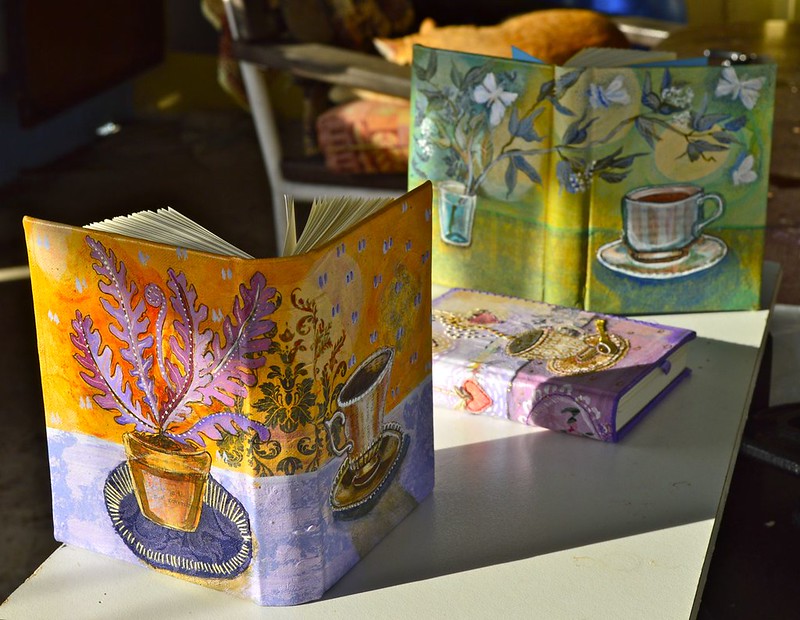 Magic. I will NEVER become blasé about the transformation.

Running out of pages in one’s current journal is not the only reason for retiring it and moving on to a new journal. It has been a very long time, in fact, since I filled a journal right up to its very last page. The way it usually happens, with me, is that I will sit down to my semi-regular ritual of journal-keeping, and feel a powerful aversion to writing in that journal. As though the things I want to write about don’t belong in that particular book.  My journals usually span a period of 5-7 years…a good chunk of time in which major life situation and personality changes might occur (I’m not talking about the fanciful myth that claims we generate completely new bodies every 7 years!) that find me a different person, at the end, from who I was when I started the journal.

Soon after we arrived in Australia (sailing from the Philippines, stopping along the way in Timor L’este for a month, all in all taking three months to get here) I found that I could not bear to write in the wooden-bound journal (the one named, no kidding, Tagebuch) I had brought with me. Tagebuch, and everything within it, belonged to the tropical archipelago of small limestone islands where Kris and I had lived for 6 years, in a fisherman’s ramshackle beach house an hour’s walk from the next cluster of human beings. There was no internet, mobile phone, digital camera, or laptop. We didn’t have jobs. We had no electric power of any sort—no lights at night, no fans, no television, no music—nor plumbing, and the little bit of money we had, we made by selling our paintings and handbound journals at galleries, exhibitions and craft fairs elsewhere in the country. There had been a huge tropical garden (my pride and joy) surrounded by 2 hectares of coconut plantation, and a jungle looming behind us that rustled with the movements of monkeys, pangolins, civets, pythons, tree shrews, sea eagles, mysterious night birds, and the rare, endangered local peacock pheasant, tandikan.

I wrote my journal in the mornings, at a table standing among hippeastrum lillies in the garden, or at a desk in the bedroom on wild monsoon nights, with half a dozen candles burning for light. We would sit in the doorway of our bamboo shack, senses alert in the total darkness of the night to every firefly or leafy crunch, every susurration of the sea in its different moods. We spent our days painting, marbling, reading or binding books; we took breaks to comb the beach for tumbled glass or chambered nautilus shells, or walk the twisty dirt roads of the surrounding countryside. We moved through cycles of making art, making love, making coconut curries, making strong loaves of peasant bread. This was the real world for us, and we seemed to exist outside of time.

How could I, arriving in Darwin—a whirlpool of working & earning & spending, of material culture, of social interactions, of self-assertion and ego-building, of status anxiety, and the never-ending struggle to establish one’s meaning or worth in empirical terms—continue to use my jungle book, my turtle-moon-hippeastrum-poetry-green-glass-seasnake-soulmate-candlight journal? It felt like a desecration, and that’s how I knew it was time to make a new journal.

Twist and Shout has been my Darwin journal since 2007. The name was actually printed on the selvage of a quilting fabric I had used to make the covers’ patchwork with. It seemed to fit with the way I felt about Darwin at the time…the teeth-grinding busy-ness of the place, the commerce, the social and racial tensions, the clashes between individuals brought on by drunkenness or just selfish intolerance, the big hurry that everyone was in to get someplace else.

It contains the story of finding my place within this small city, of meeting friends and carving a small niche for myself, of making a home and coming to belong here. It cobbles together what I have learned about Northern Australia and the things I have come to love about the place. My very first fresh peach, apricot, raspberry, pomegranate were experienced here. My first fresh fig (a moment worth many chapbooks of poetry) and my first octopus (a moment worth many cookbooks). My encounters with crocodiles, flying foxes, frilled lizards, wallabies, kangaroos, and a Clydesdale horse so big that I thought of Norse gods.

It might mention some of the new toys and tools that living here made it possible to acquire. My job experiences as cleaner, as gardener in a plant nursery, as kitchen hand, as back-to-uni student, as craft teacher. My delight in bicycles and the daily love I feel for Darwin’s meandering, tree-lined bicycle paths through shady parks full of ibises, plovers, and sporty types, appears everywhere in its pages. It includes the year I rented an art studio, and the fun of putting together my first two solo exhibitions. The accounts of trying to learn a third language, to study printmaking, silkscreen printing, and doing a dressmaking course, are here, too. I made my own clothes for the first time here, on a 70-year-old sewing machine that I bought within a month of arriving in the country. Of course it documents the continuing importance of the sea in my life.

On the whole it has been a good companion, this embroidered and patchworked book of 500 pages (400 used)—so full of paint and inclusions that its covers are permanently agape—although I did not write in it as regularly nor as copiously as I did in the last journal. I was much more bound by time during this period of my life…well outside of the standard rat race, but a rat on the sidelines, nonetheless…with unexceptional jobs, keeping regular hours, having bills to pay and other financial commitments, watching in growing anxiety as the days, months, years flew by because my attention leapt from payday to payday as across stepping stones…the rest of the days falling, unremarked, between them, and flowing away like water.

Last week, although there was plenty I wanted to write, I felt unhappy about having to write it in Twist & Shout. I’ve learned to recognise this feeling immediately, and so put away my pen and ink bottle, and re-read the journal, instead. The signs were unmistakable: some entries were fun to read, and a little bit was of continuing importance, but most of what I had written was already obsolete. No longer useful or even relevant to me, the person I was in 2007 had been left behind. I had moved on, and at some subtle point had turned a corner, from which my 2007 self could no longer even be seen or remembered, and the way back had been rubbed out behind me.

Only the present moment is real, though I have some vague ideas about the way ahead.

In my next post I’m going to write about making the transition between an old and a new journal. I suppose one could just drop the old journal, and start in the new immediately, but it seems a shame to treat an old friend and one-time constant companion that way. It seems ungrateful, somehow. There are rituals of gratitude and farewell for tools and objects—as there are for friends and loved ones—to soften the sharp edges of change and to prepare oneself for what might lie ahead. I thought I might share my own practices here, not so much for you to follow as to help you think up rituals of your own.

As my weekend comes to an end, with two handmade gifts yet to make before Saturday night, I started to play dirty. Took a small painting I was never happy with (green, hairy lump of Lord-knows-what)…

Took it off its stretcher and punched tiny 1 mm. holes all around the outline of the shape, and then randomly punched holes inside the shape, too.

The punch is a Japanese drill or screw punch…the smallest hole punch I’ve found, yet. I got mine from Hollander’s. (Crafting is such a delight when you have the right tools for the job!)

Then I started to “connect the dots” with lengths of variegated DMC Perle #5. No plans, no sketches, just running up and down and inventing the paths as I went…

Couldn’t resist and added some dots and filled some areas with gold or glitter paints. Probably shouldn’t have, but what the heck, I’m leaving it in. (Running. Out. Of. Time…*gasp* Must. Keep. Crafting…)

The piece will go onto the cover of a simple coptic journal. I started binding the book today, but it got dark before I could take photos, so this post will be continued tomorrow…

Hope this has given someone some good ideas…