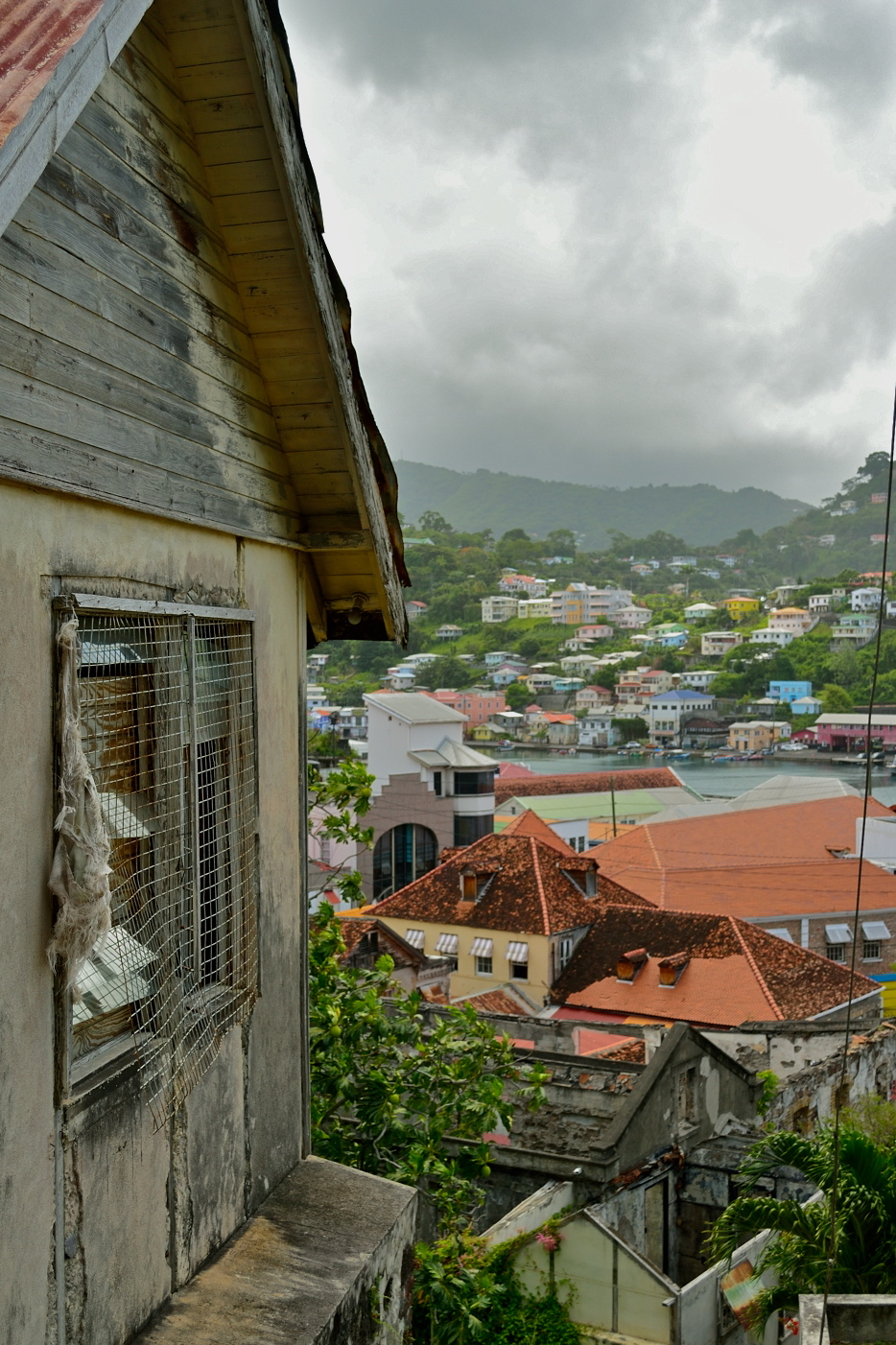 Okay, that’s it for St. George, bet you’re relieved. These posts have been scheduled to post automatically, every few days, because I don’t get an internet connection all that often. By the time you read this post, we will probably have been in Venezuela a couple of weeks. Wish I could post things as they happen, but well, that’s life on a boat, I guess, the news will always be a little bit old by the time I can get it to you. 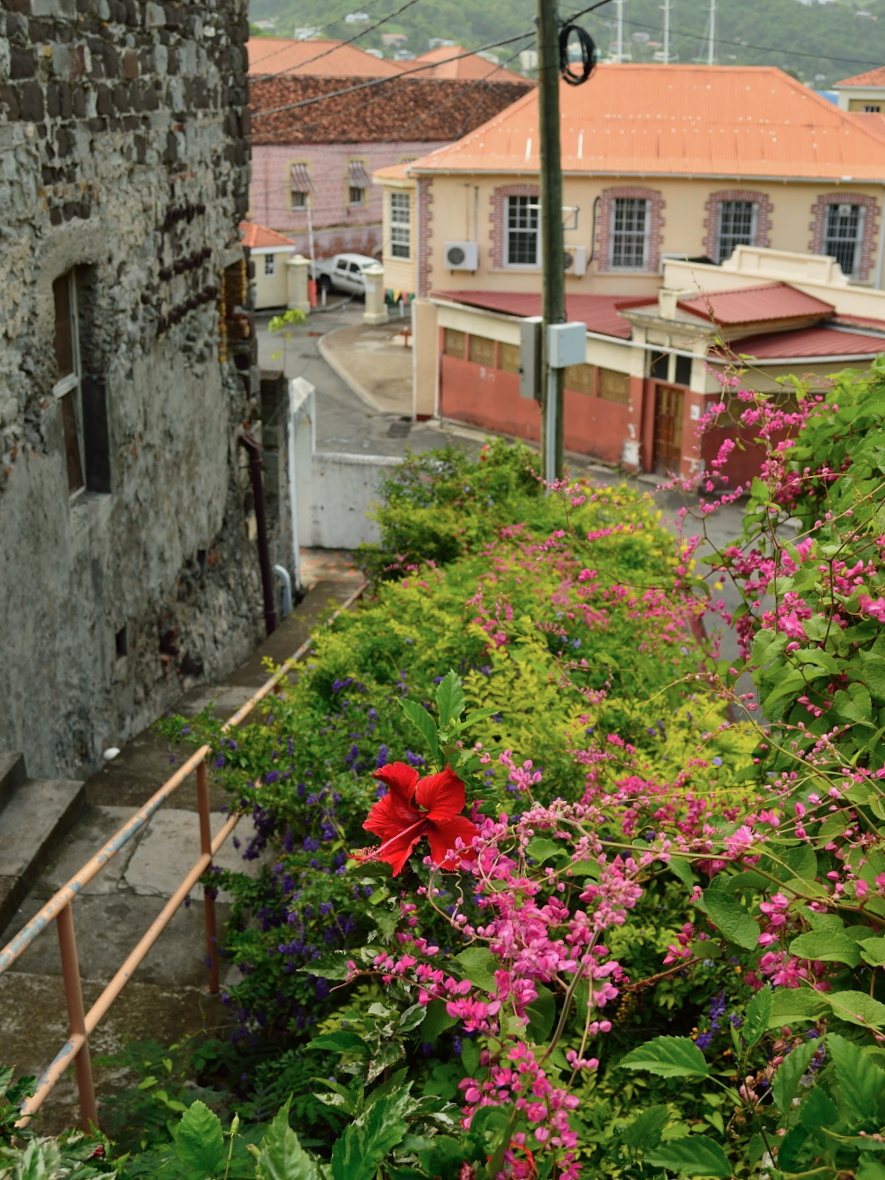 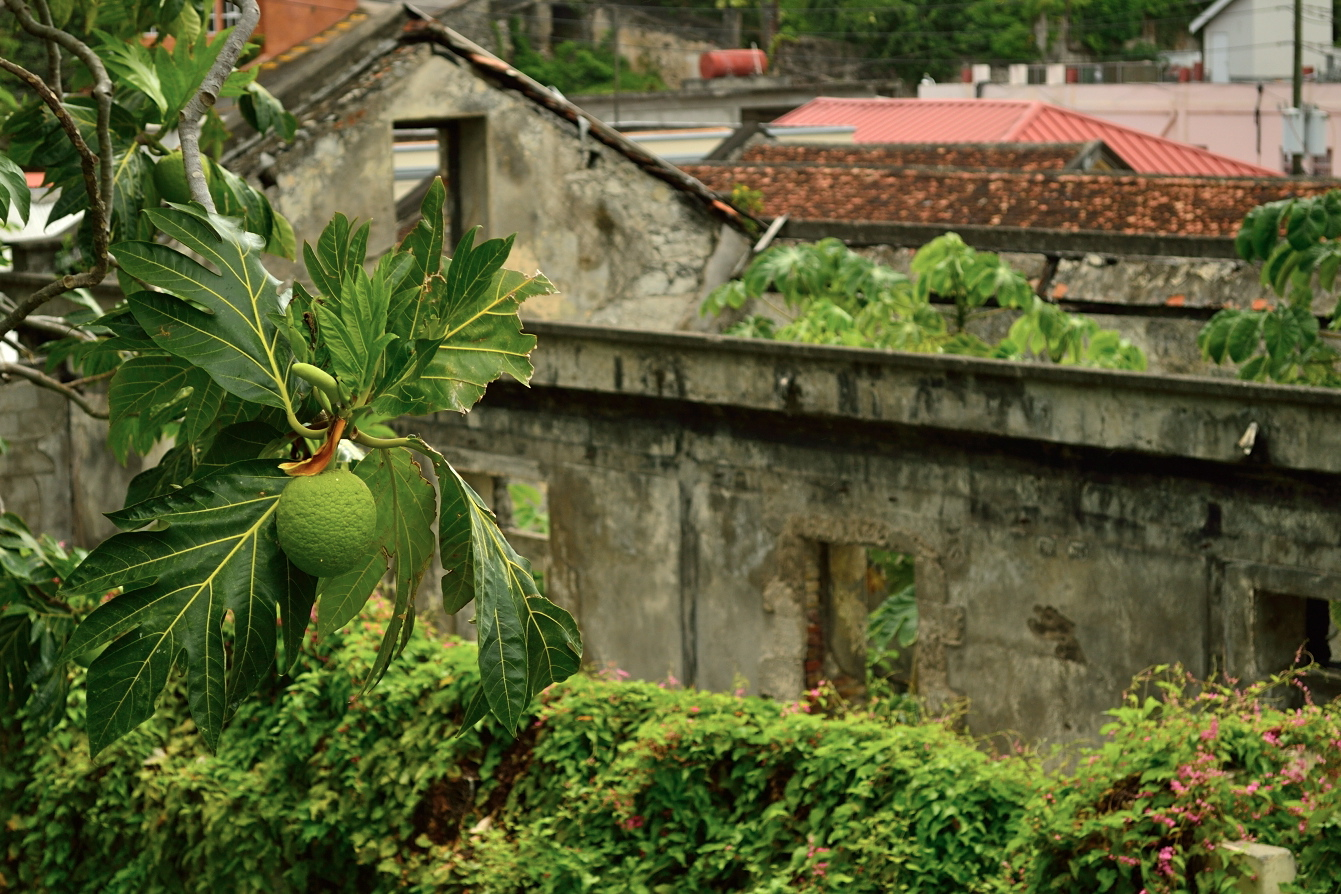 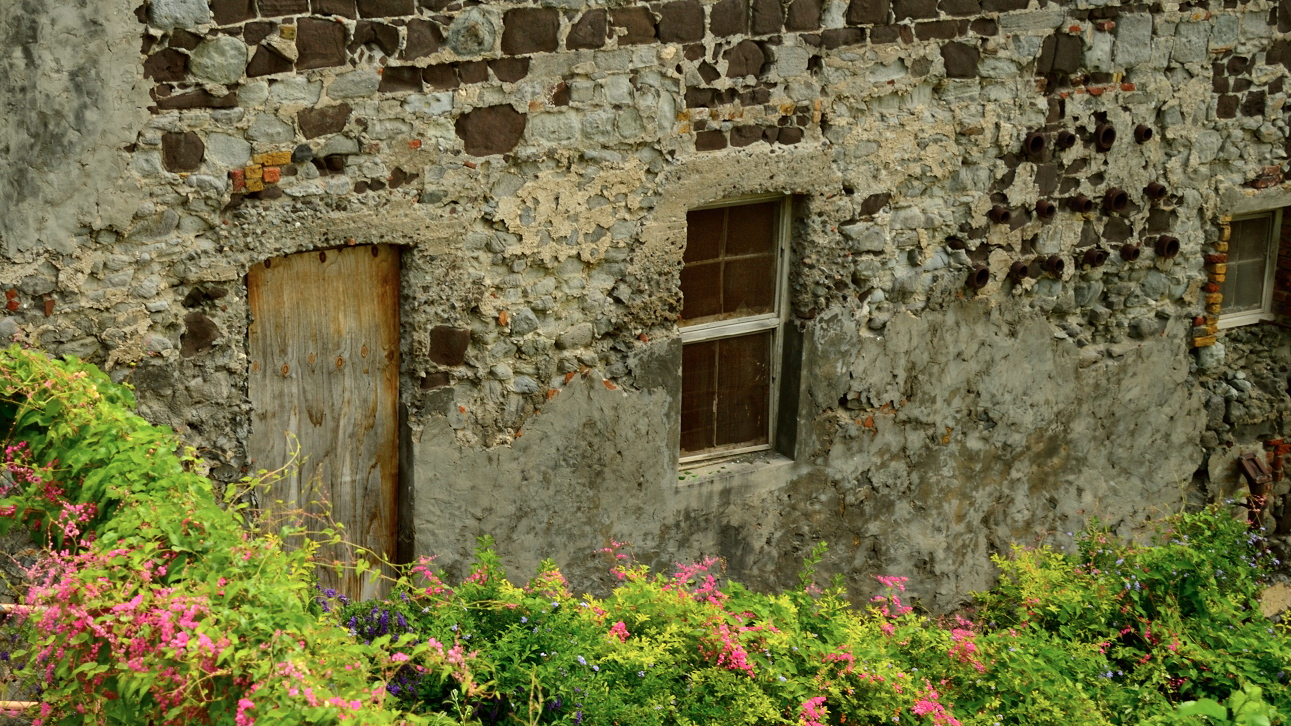 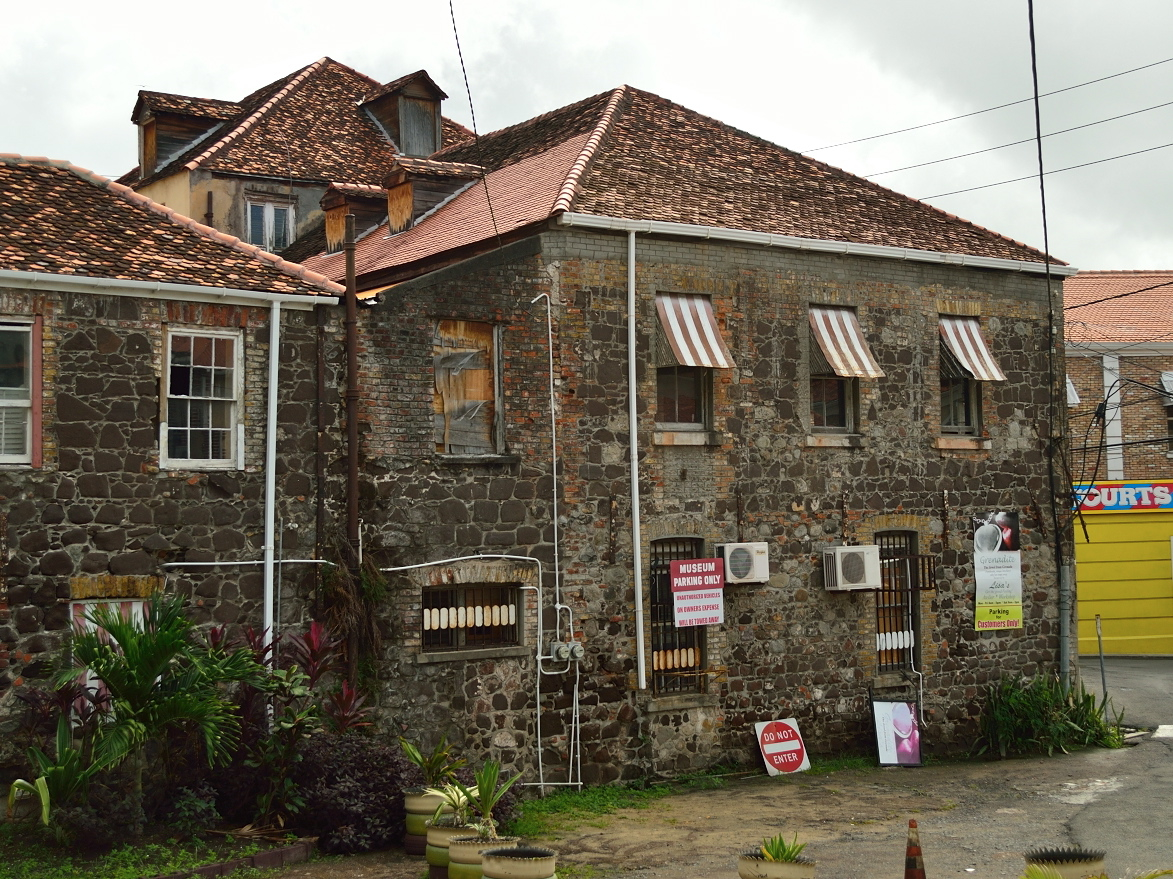 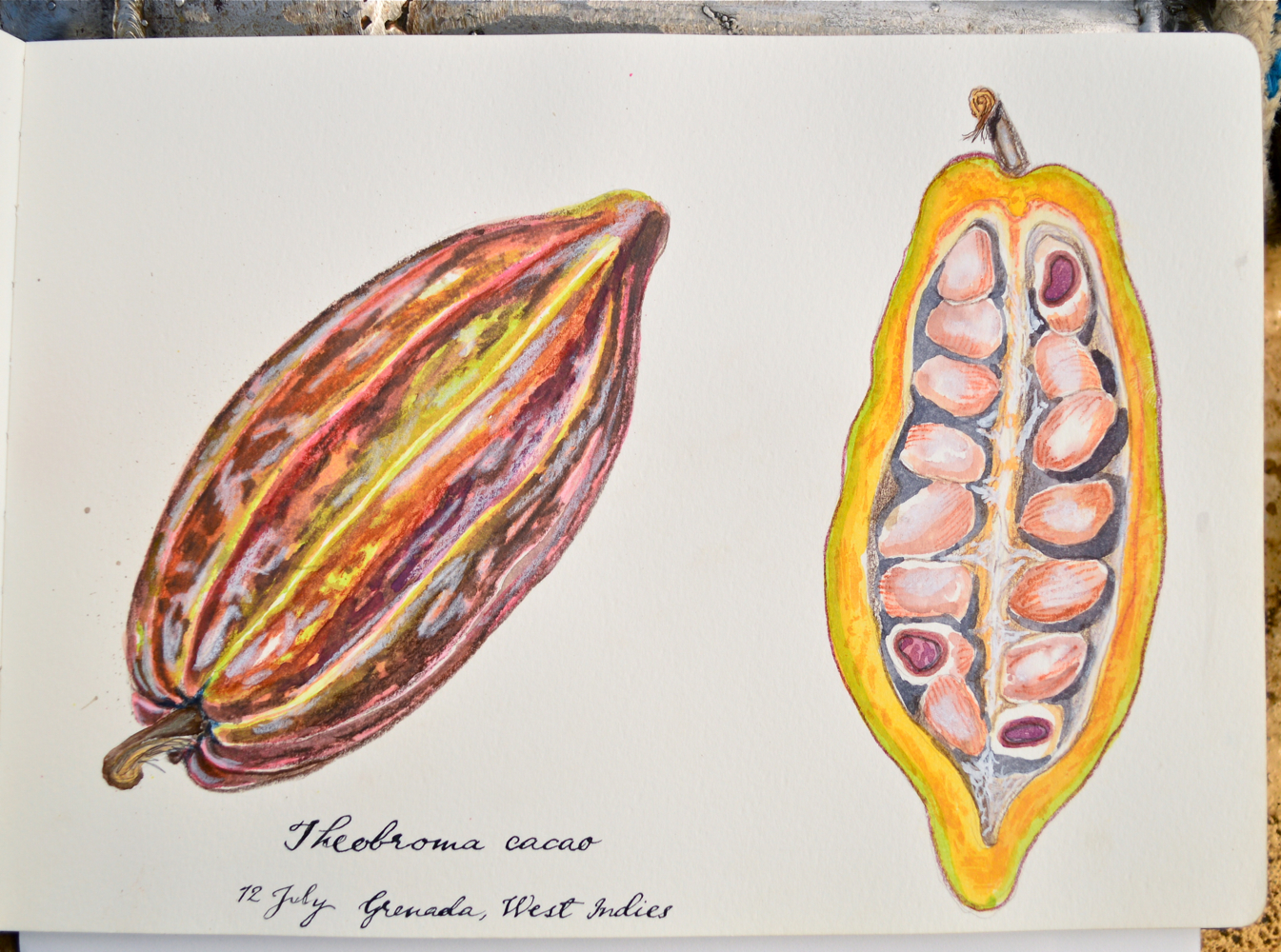 The local “market” in St. George’s is little more than a Potemkin Village movie set for tourists. We wanted to stock up on raw cacao nibs for the trip (about 10 kilos…more or less 20 lbs.) but the old ladies—with their headscarves and hoop earrings and little woven baskets—at the market wanted 5 EC$ for a tiny little handful. Ridiculous (we are serious cacao consumers, not cruise ship dilettantes looking for souvenirs.)

Kris found a real source of cacao when he was walking across the island…a warehouse in the mountains where they buy, grade, roast and sell the nibs in large quantities, for more realistic prices. Unprocessed cacao nibs were EC$5.00 per pound. We are well-stocked, now. And, as a bonus, walking home with his sack of nibs over his shoulder, he went past a neglected cacao farm, and picked one of the fruit for me to draw. The pulp around the nibs is sweet and also edible, though you have to suck on many of them to get any satisfaction (the pulp’s thin).

What to do with cacao nibs? Roast them (we toss them in a small wok and stir them around over the stove till they start to smell like chocolate) and then shell and crush them to use instead of nuts in baked goods or salads. Crunchy, bitter, and unmistakeably chocolate.

Boil roasted nibs with something (like milk) and then strain to get “chocolate-flavoured anything”. Pound them with honey or condensed milk into a coarse paste (Kris does this, eats it with a spoon. The Barbarian. I’m just jealous because I can’t have condensed milk.)

I grind them up and use like I would any ground spice, in curries or sauces (e.g. the Mexican classic, mole Poblano), with chillies, plantains, chicken…

Or you can try making a basic chocolate at home…there are lots of recipes and ideas on the internet. I quickly found this one (but don’t have cocoa butter, to try it out) and it seems like a good place to start. 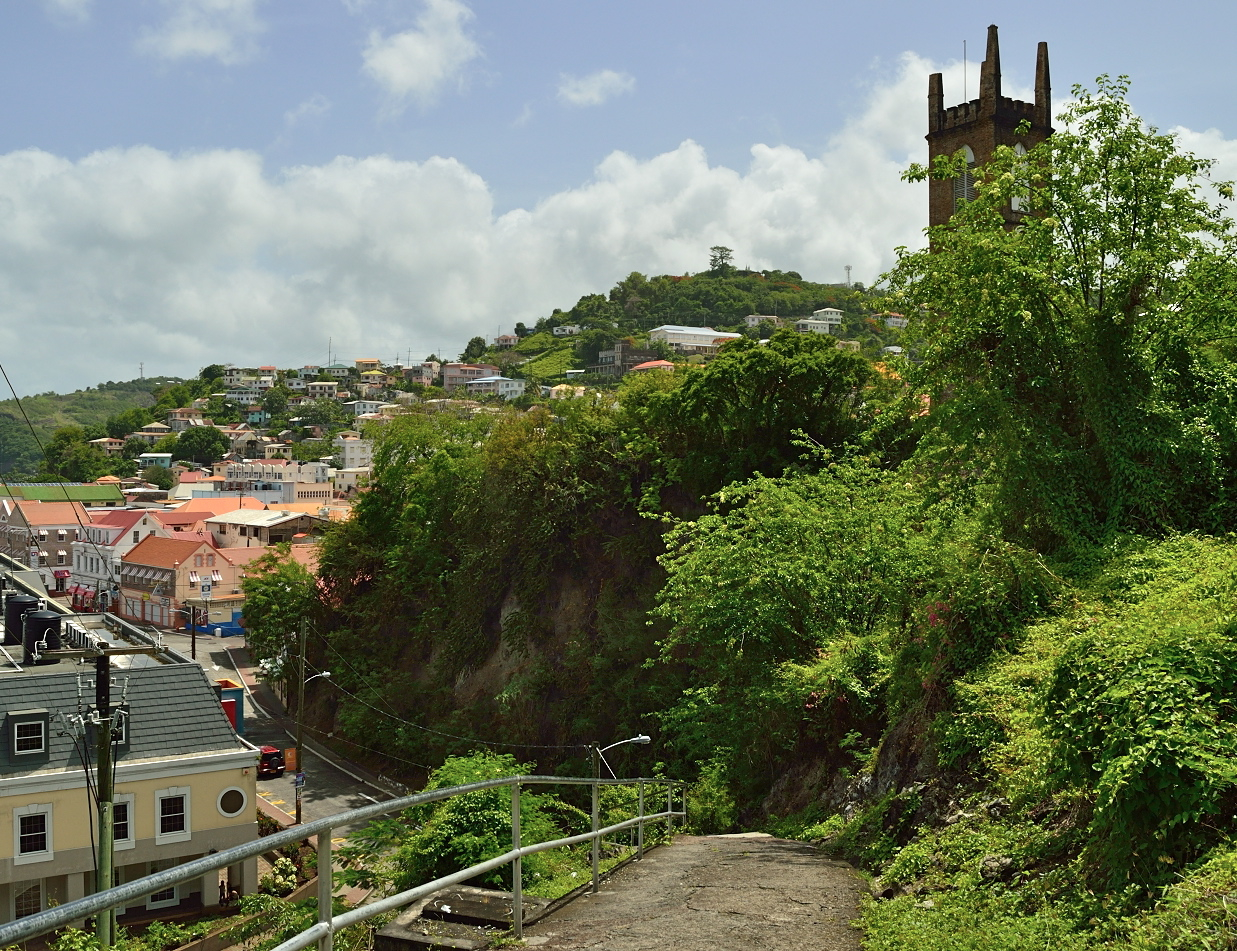 Penultimate St. George’s Town post, I think…bear with me, I did walk around for four hours by myself. So I got a bit snap-happy. These are taken around the Fort St. George, high on a hill overlooking The Carenage. 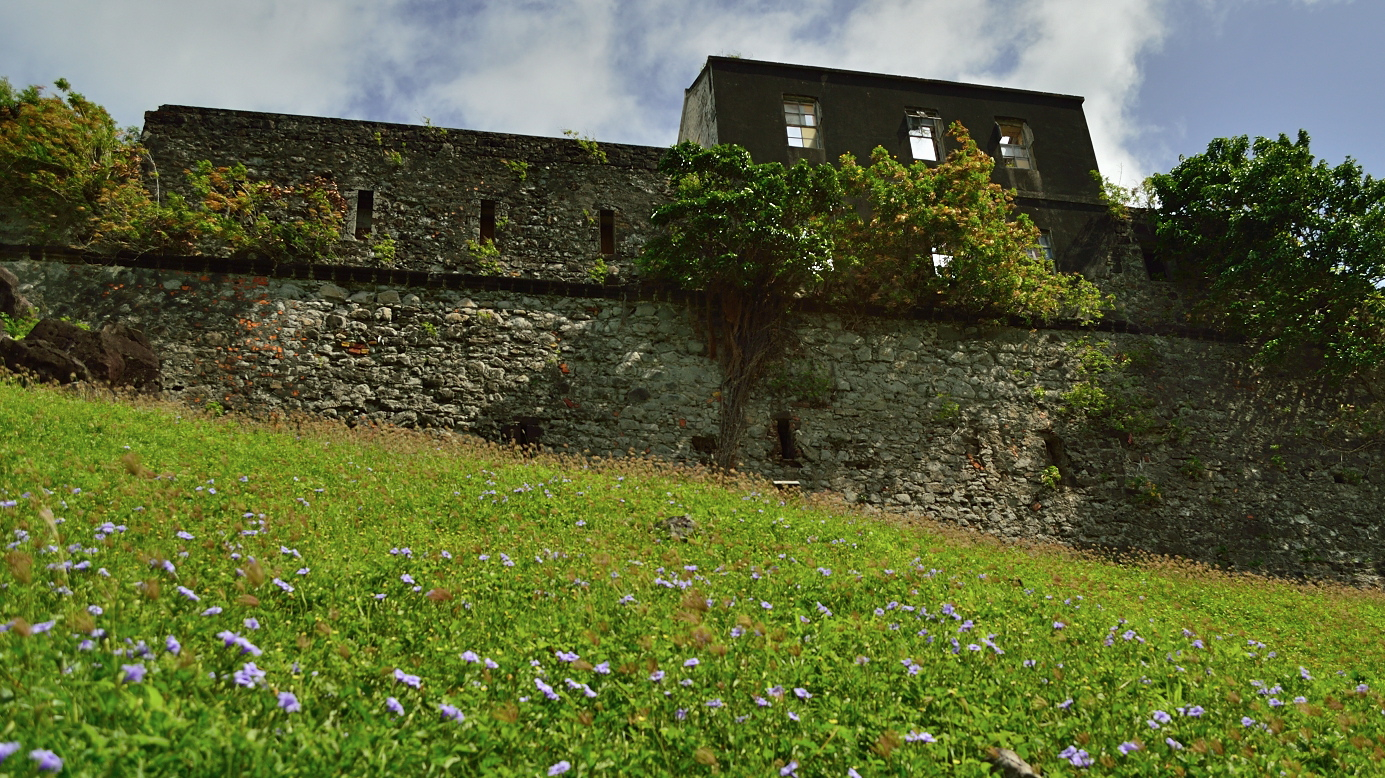 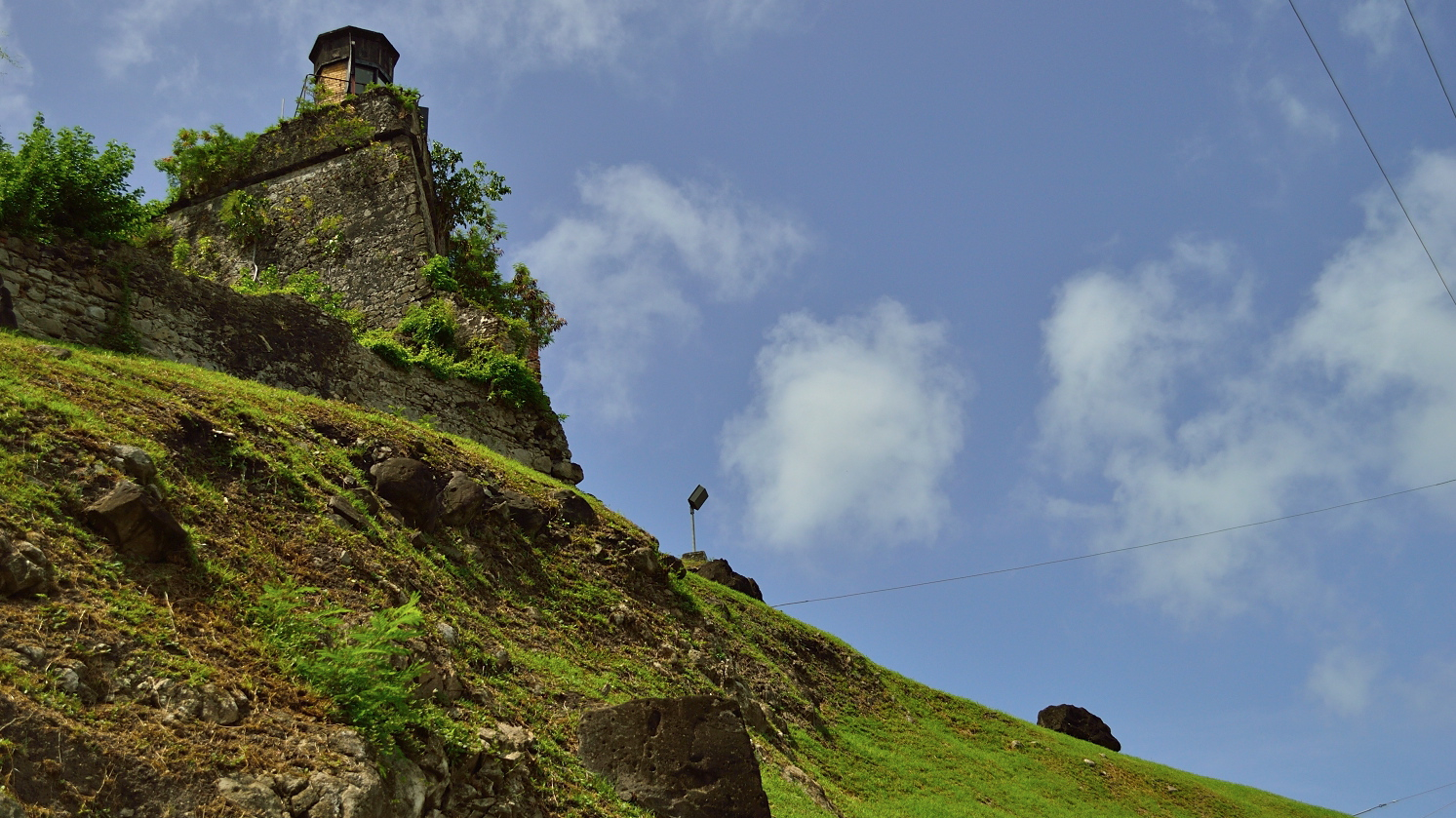 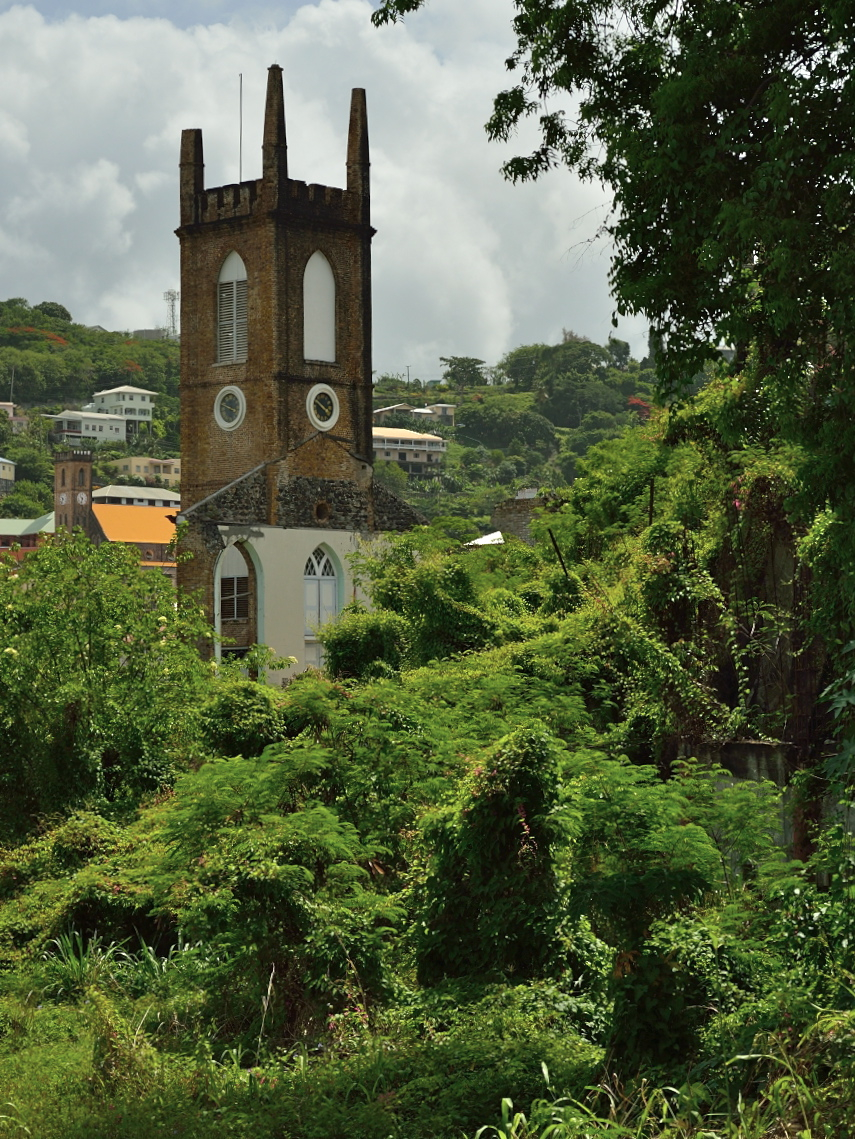 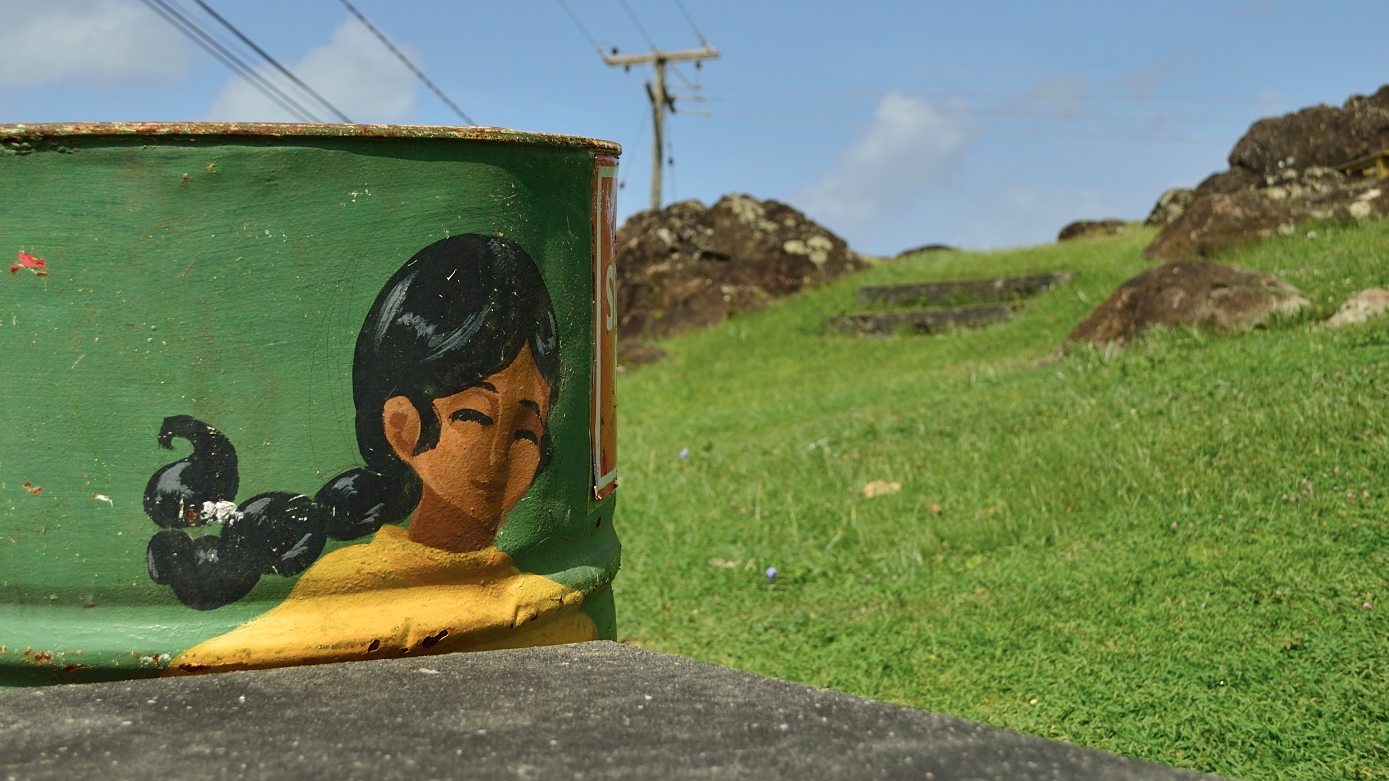 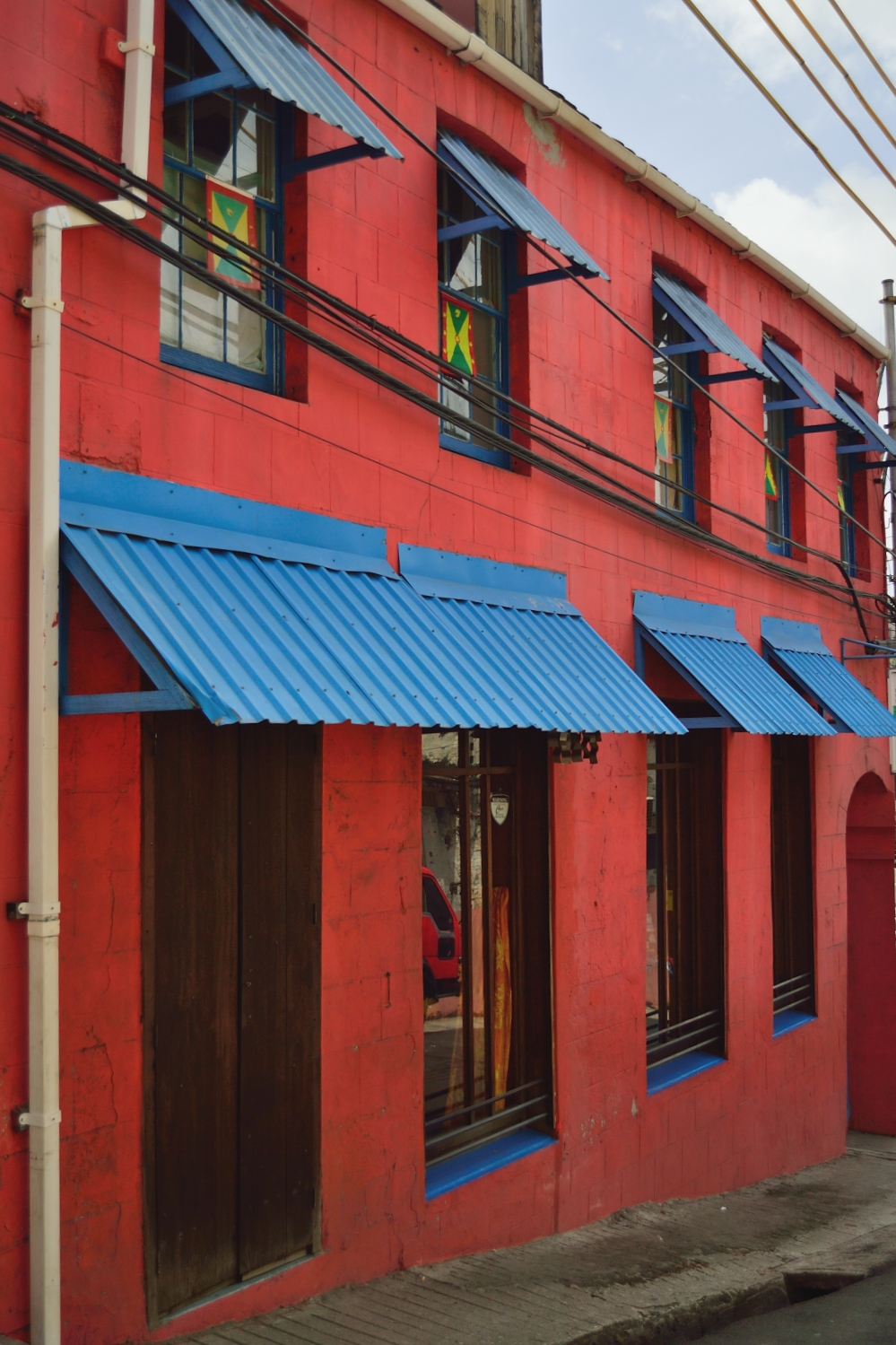 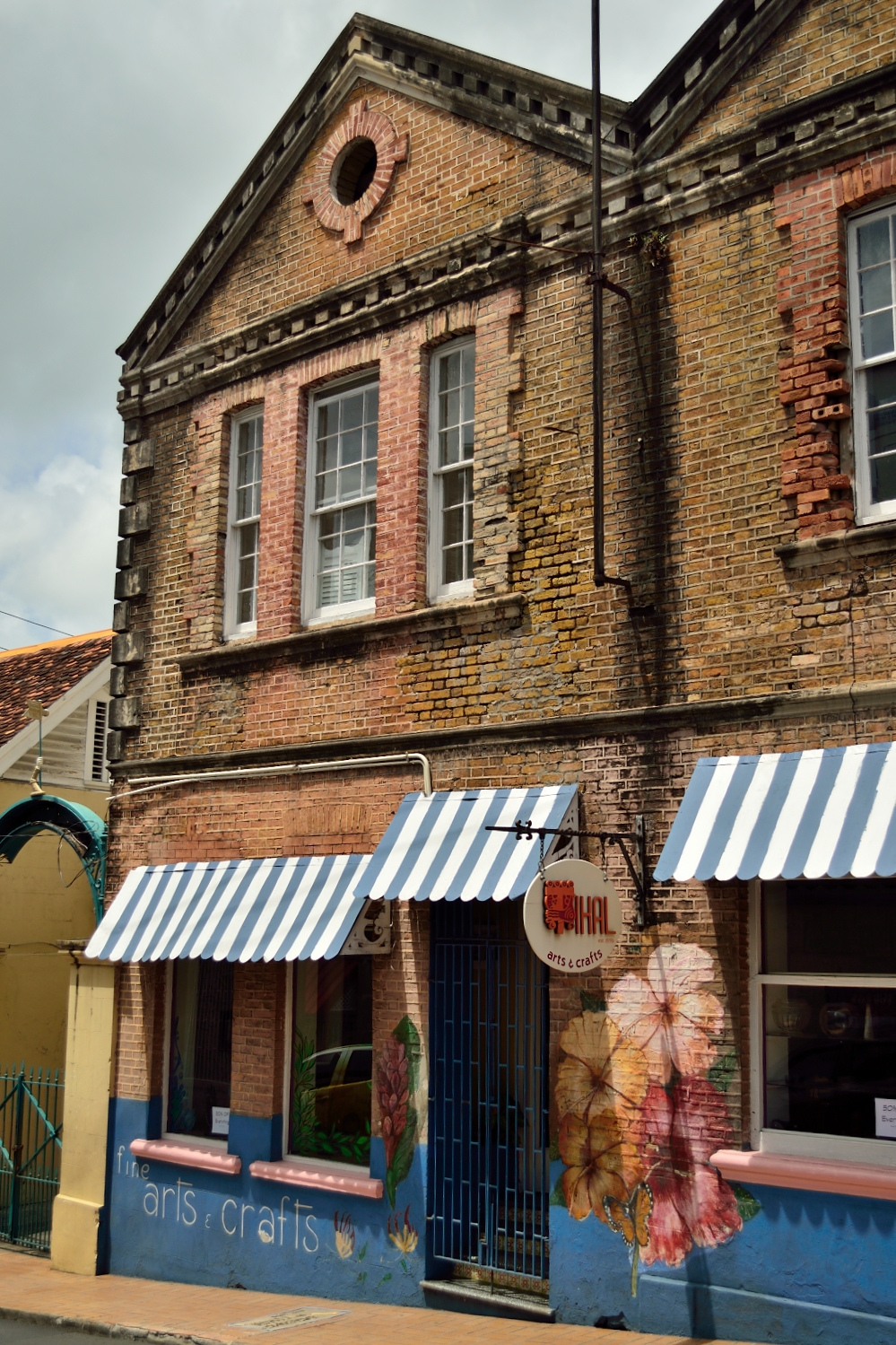 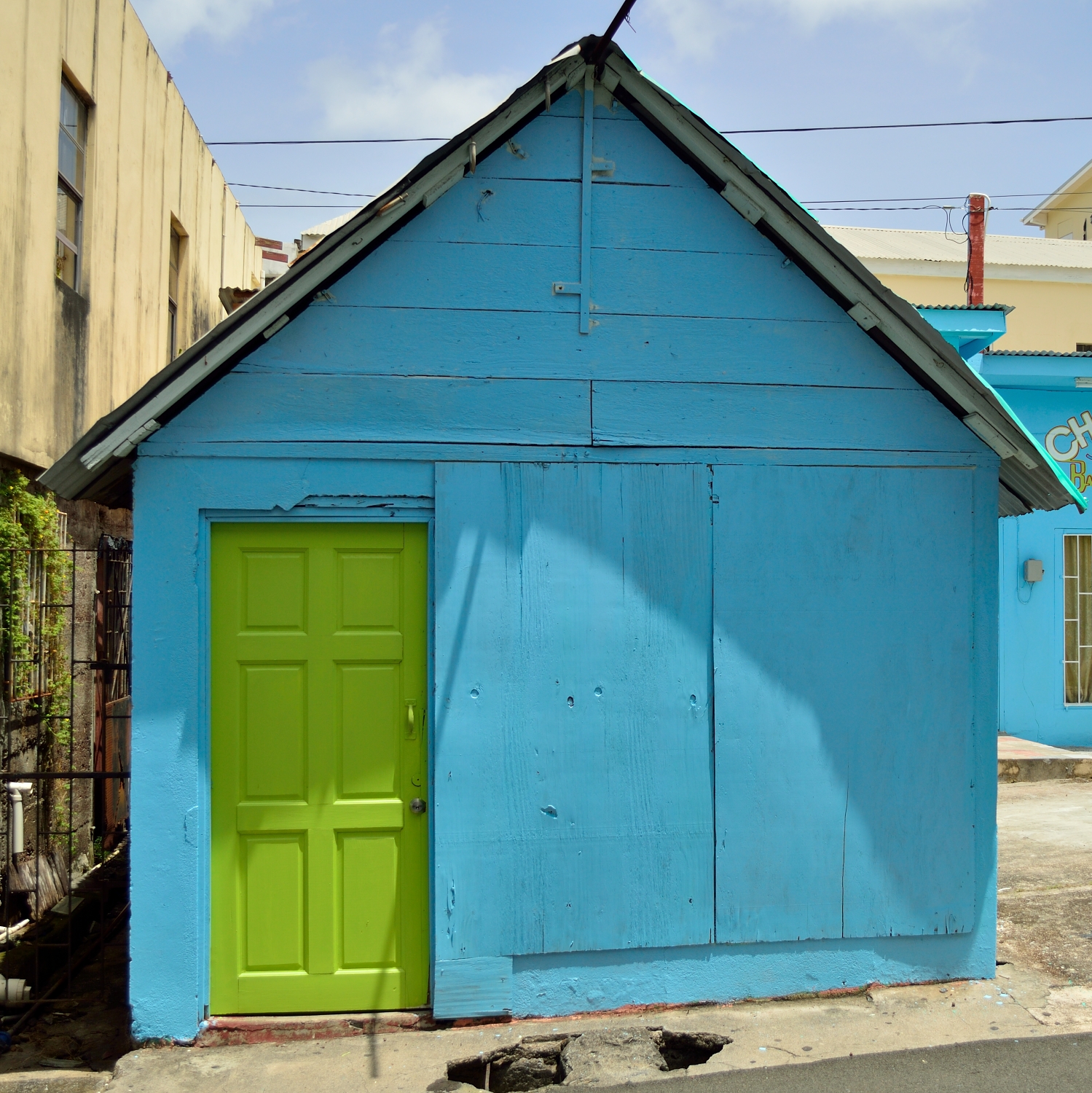 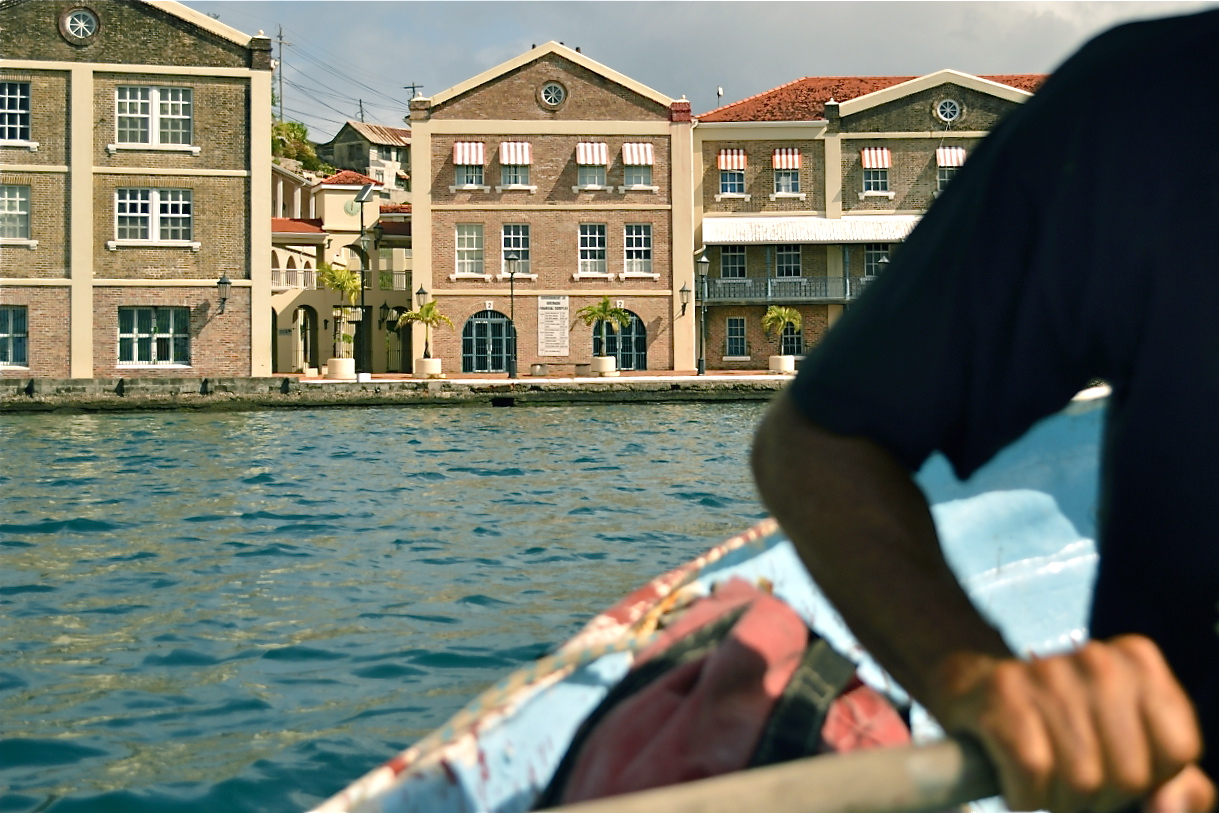 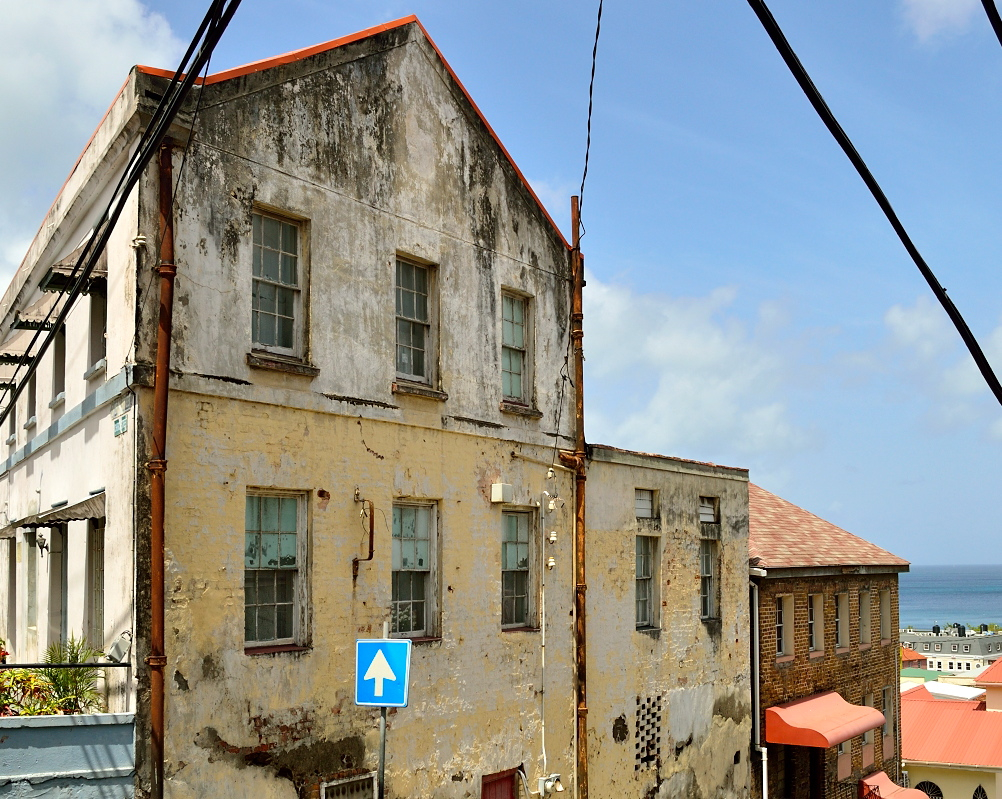 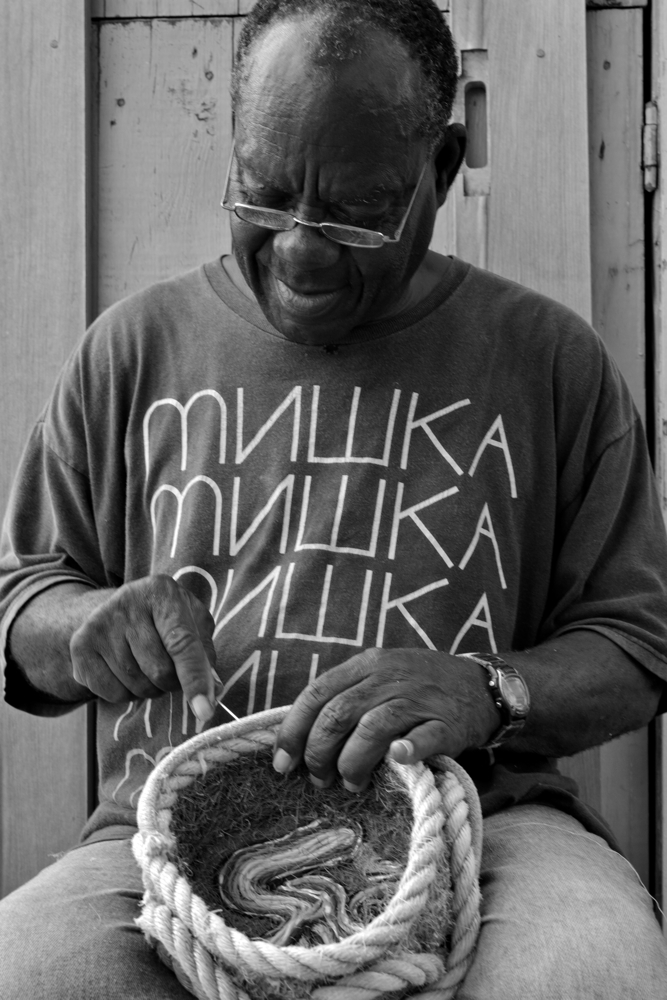 Took a shortcut to the beach from the supermarket through the L’Anse aux Pines park, and spotted Mr. Jacob, sitting with his back against a disused shop, stitching something. Drawn like a bee to honey by anyone plying a needle, I went over and got to talking to him.

Mr. Jacob isn’t from Grenada, he hails from some other Caribbean island, but he moves around between the different islands a lot, doing his work, collecting old rope, and selling his handmade baskets and bags to the wealthy tourists on the beaches. He stays at a boarding house in the town, walks every morning to his little spot next to the park’s entrance, and sits there till sundown, making his baskets. 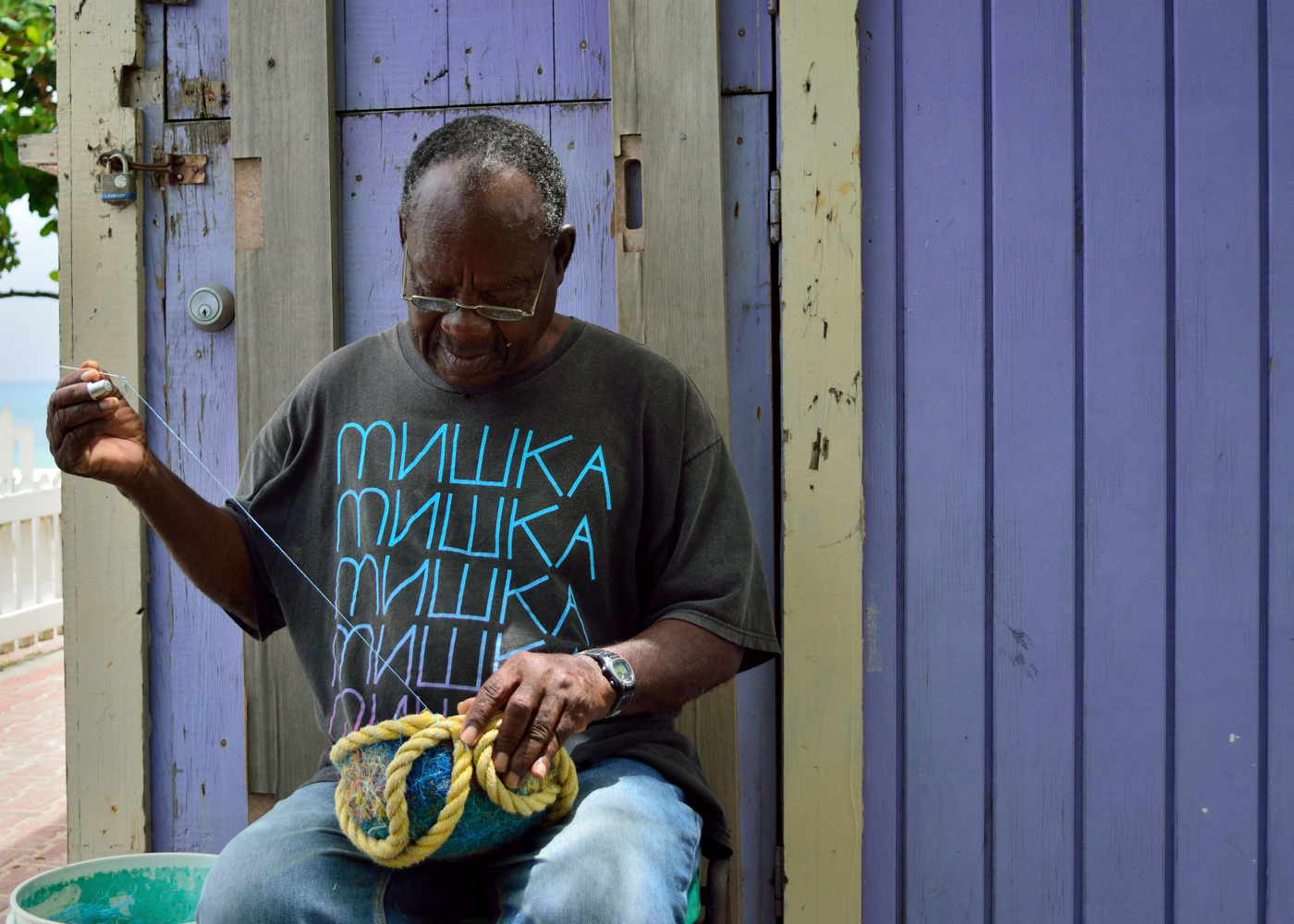 He first started making his unique, original bowls from recycled rope 20 years ago. Before that, he was a fisherman, but a problem with his ankles (swollen and covered in sores) forced him to stop and find other work. I love that he looked around his original fishing environment, and found a way to use what he had in a new, beautiful, creative way. 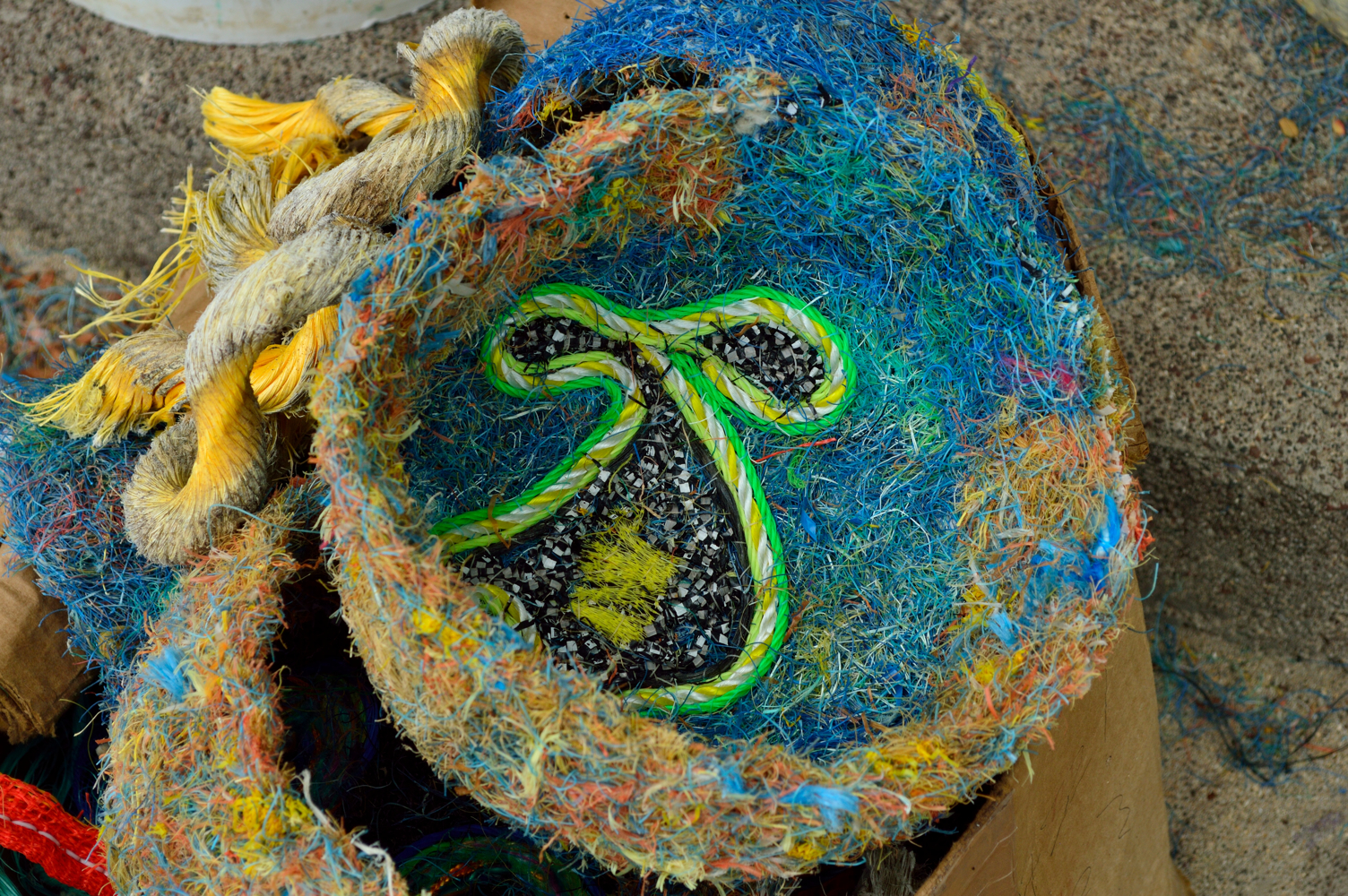 Like Naomi Drakes from Guyana, Mr. Jacob puts a lot of unbelievable work into his handmade baskets. He chops frayed nylon rope into short, 1-inch lengths, and then sandwiches the stuff between two layers of invisible, fine fishing net, and stitches through everything, working his way over the surface, until he has a kind of “felt” mat, pushed and molded by hand into a bowl or bag shape. Using this bowl as his ‘canvas’, he then couches down simple designs using lengths of thicker rope, or thin, spread-out layers of brightly coloured fibres, using a needle he made from an umbrella spoke, and ‘thread’ from yet another length of untwisted nylon rope. 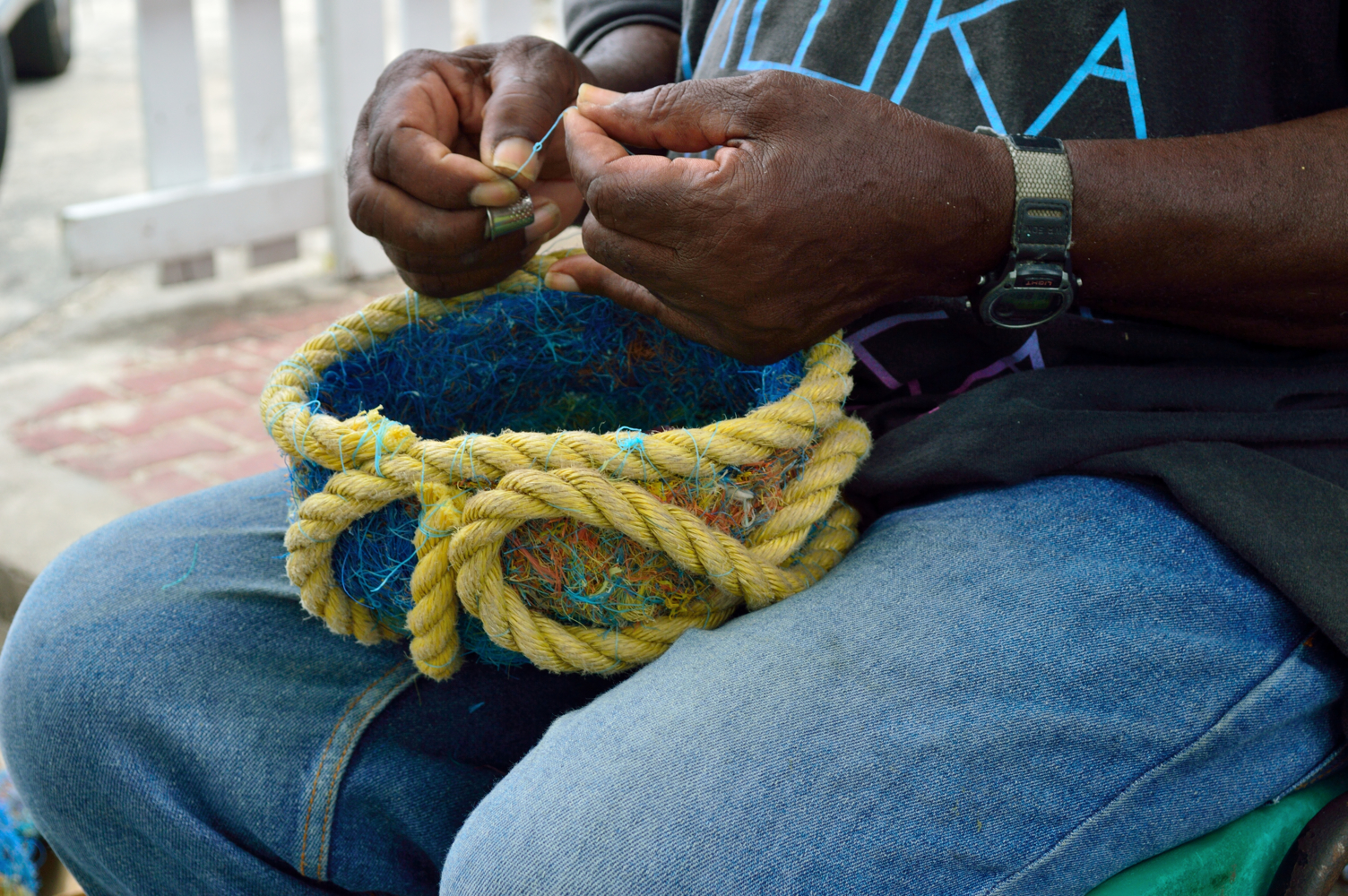 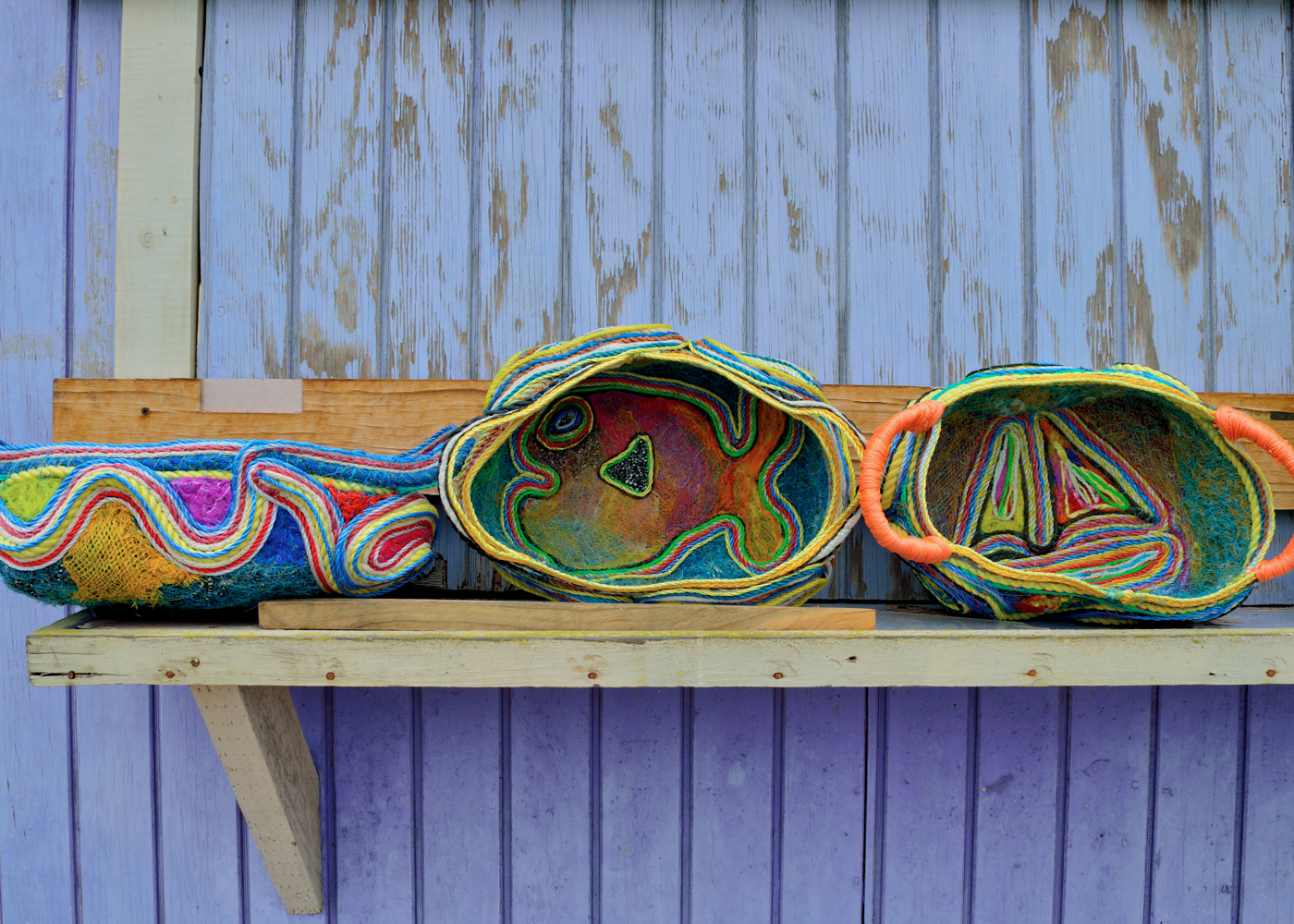 Unlike Naomi Drakes, however, Mr. Jacob knows the value of his work, and makes a decent living from the sales of his baskets and bags. No doubt this is because he has access to a bigger market with more spending power (all the tourists between Grenada and the British Virgin Islands, basically) and because there are shops and galleries that also carry his work. Any one of the large fruit bowls in the photo above costs a little more than US$100, which I think is a fair price for the two days it takes him to make one. 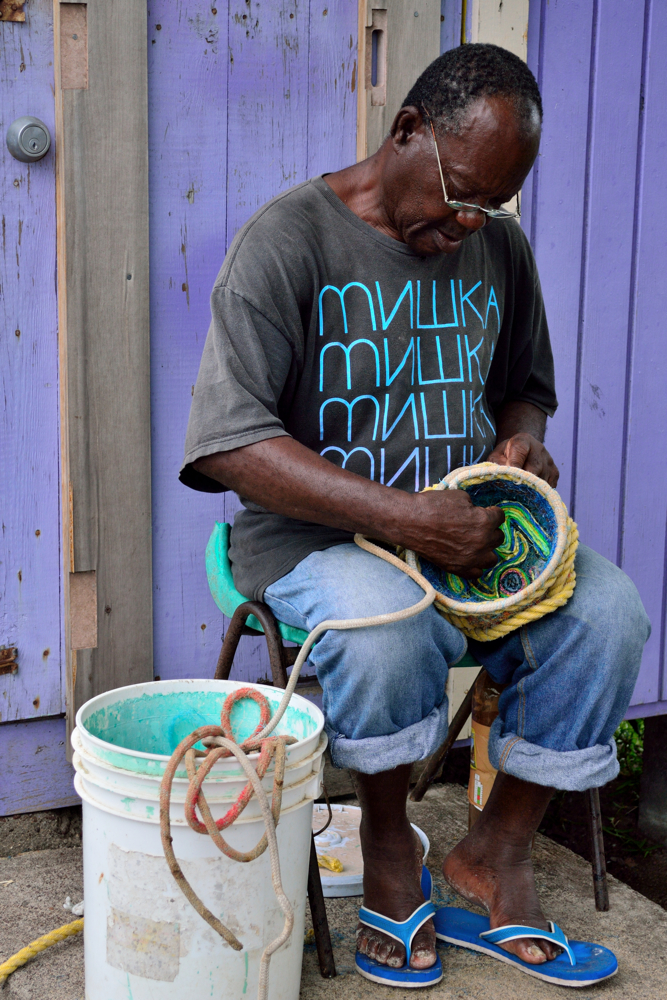 What is lovely about him , though, is that he is not at all pushy with his work. He’ll sit and stitch while he answers questions from curious passerby…never forcing his work on anyone, but never backing down on his price, either. He knows that what he makes is unique, that nobody else in the Caribbean makes these baskets, and he believes that the right person will come along and claim each one, in time. 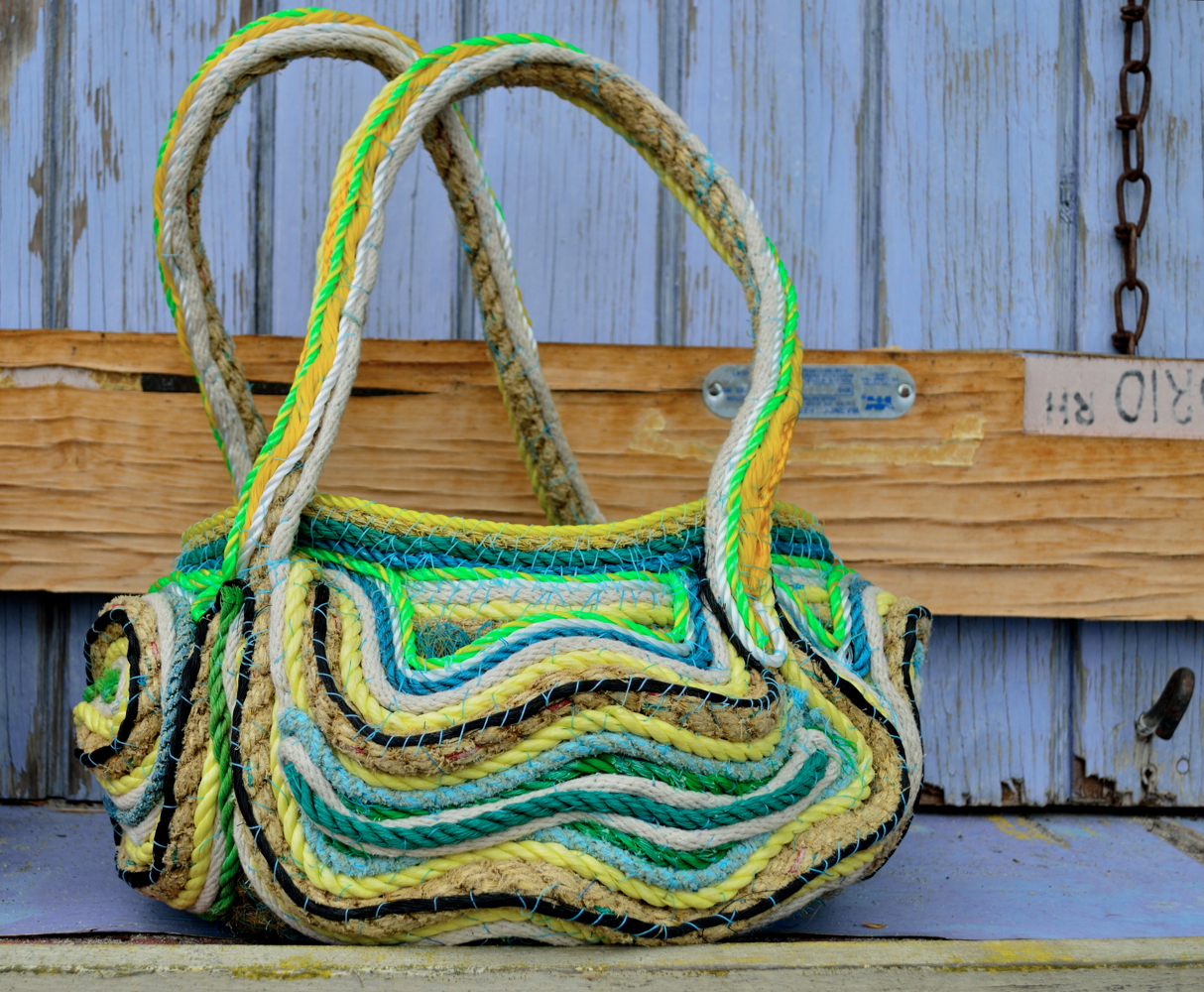 I didn’t pretend to be a potential buyer. I told him that we live on a boat, that we are traveling on a shoestring and that, much as I love his work, I cannot justify so much money for a fruit basket or bag…a hundred dollars buys us food for many, many days! He dropped the sales talk right away, and Kris and I had many lovely conversations with him about history and politics. I dropped in to see him whenever we went to the supermarket. If I bought a cardboard plate of Oil down from one of the vendors on the beach, I always got one for him, too, and we would eat together, drink the locally made tamarind juice, and chat about rope colours and his design ideas.

Far from lonely, Mr. Jacob’s corner is a magnet for smart people, and I often find him with company. He’s very well-read, well-traveled, cheerful, and because he knows how to listen and isn’t pompous, a lot of smart people hang around to talk to him. Some of the most stimulating conversations that Kris and I have had were with people hanging around Mr. Jacob. 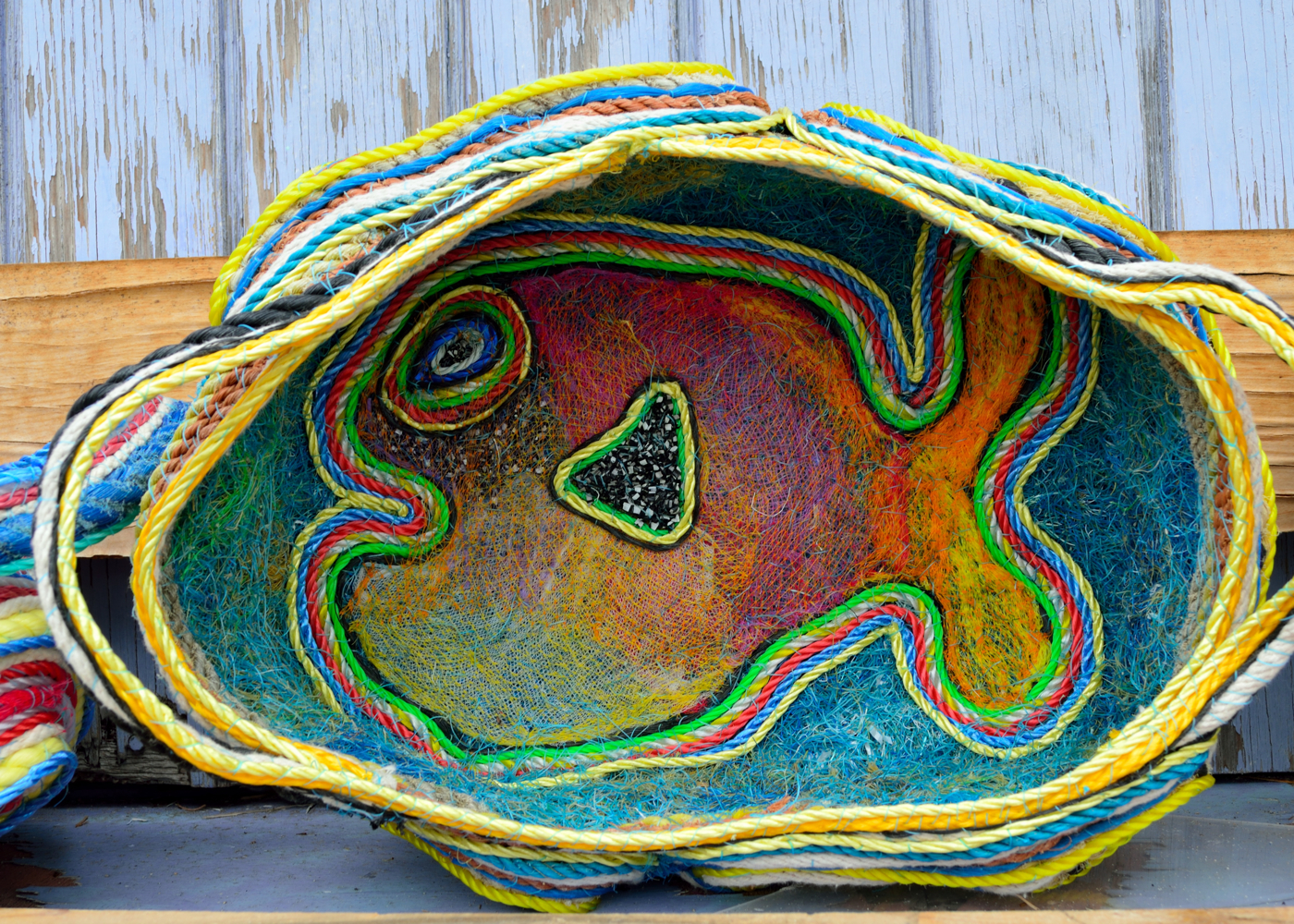 If you are interested in getting hold of something he’s made, Mr. Jacob can be reached by snail mail, but don’t be surprised if you don’t hear back from him for many months…he moves around the West Indies, stays at boarding houses or with friends on the different islands of the Caribbean, it may be a while before he gets back to read his mail in Bequia (pronounced Bek-way).

We are leaving today (I write this on the 17th of July) and I have had these same photos printed for him in town, so he can show his work to people when he doesn’t have many finished pieces on hand. I’ll be going to see him in an hour, to give him the photos and say goodbye. We leave for Venezuela tomorrow, the 18th of July. 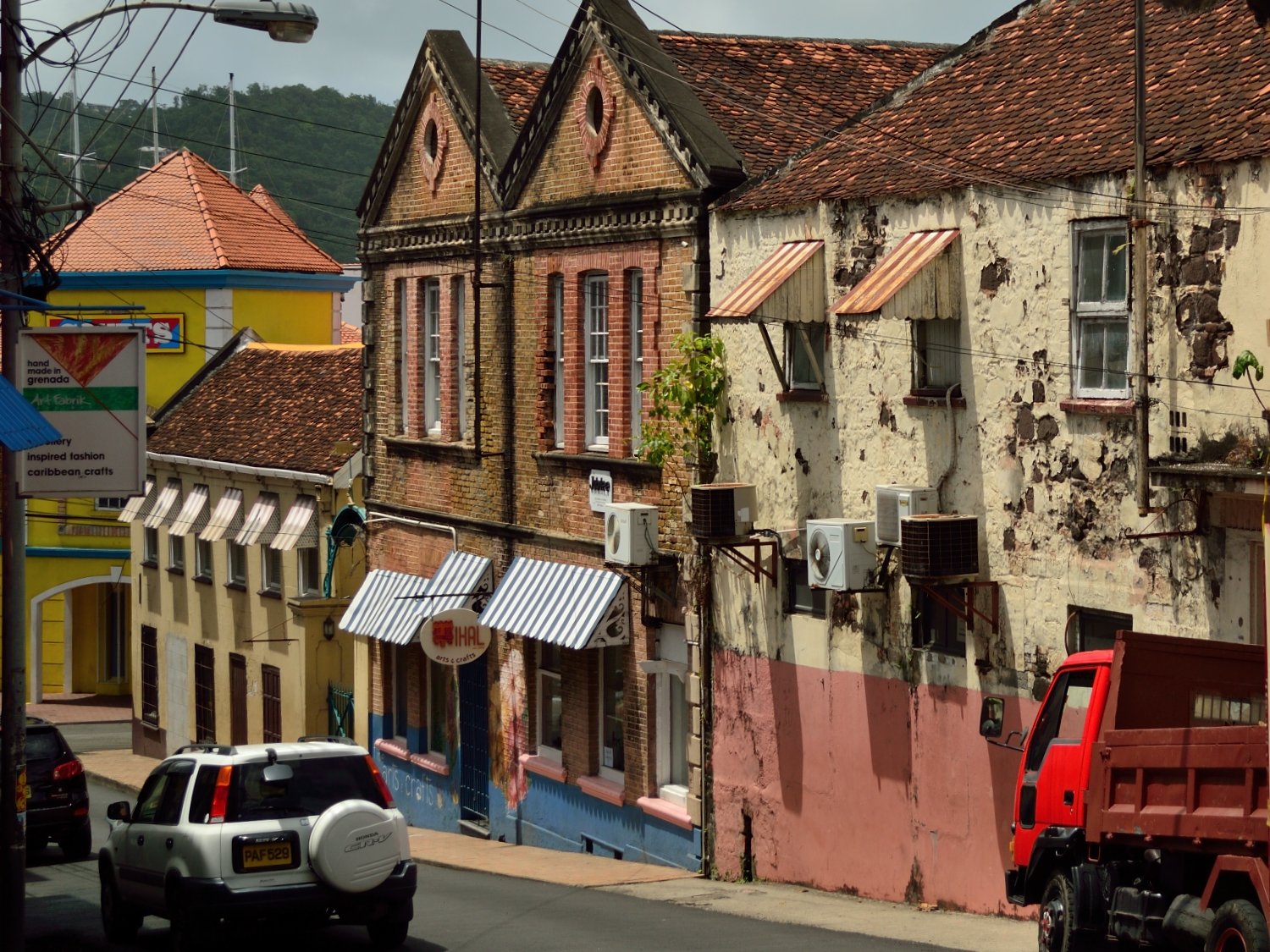 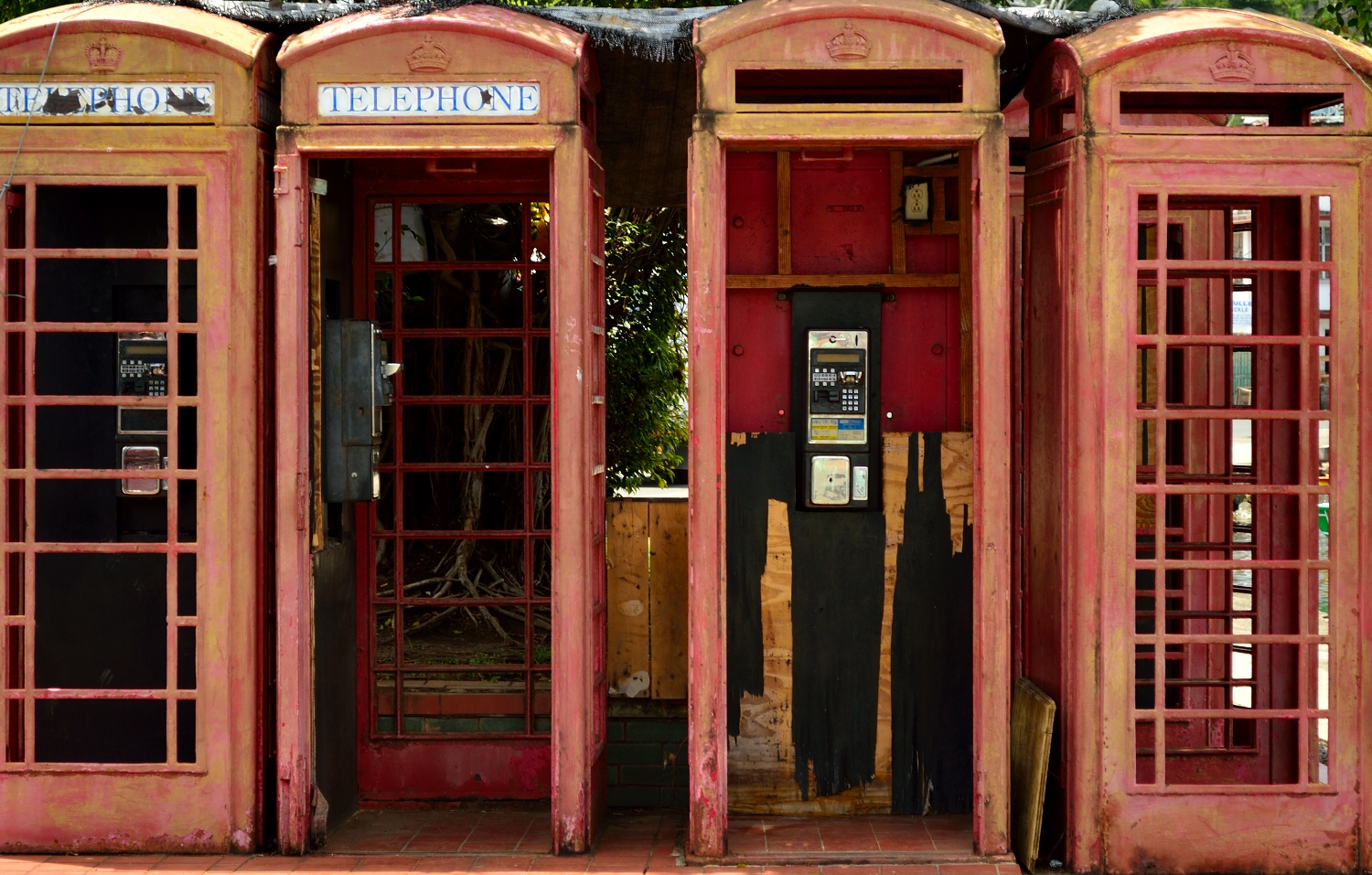 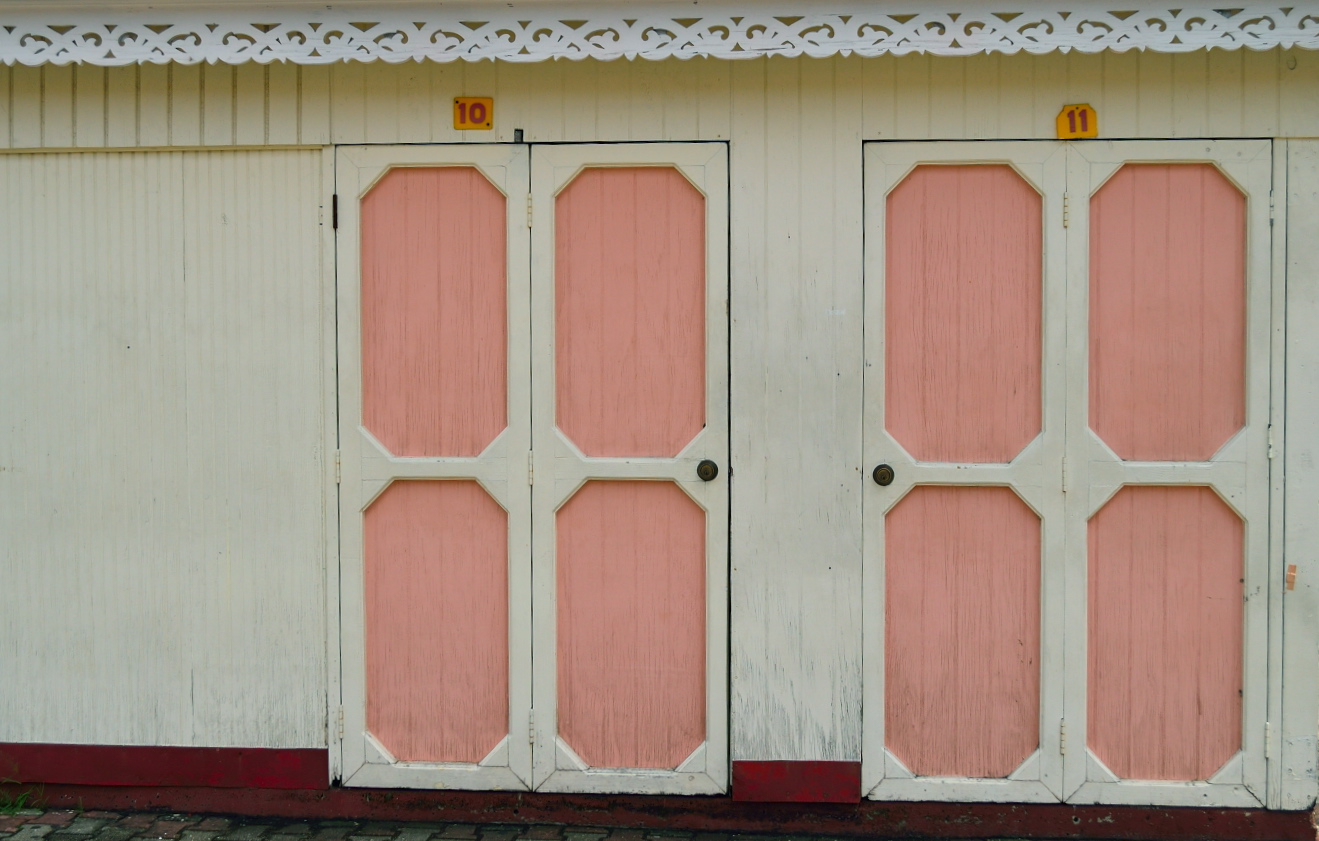 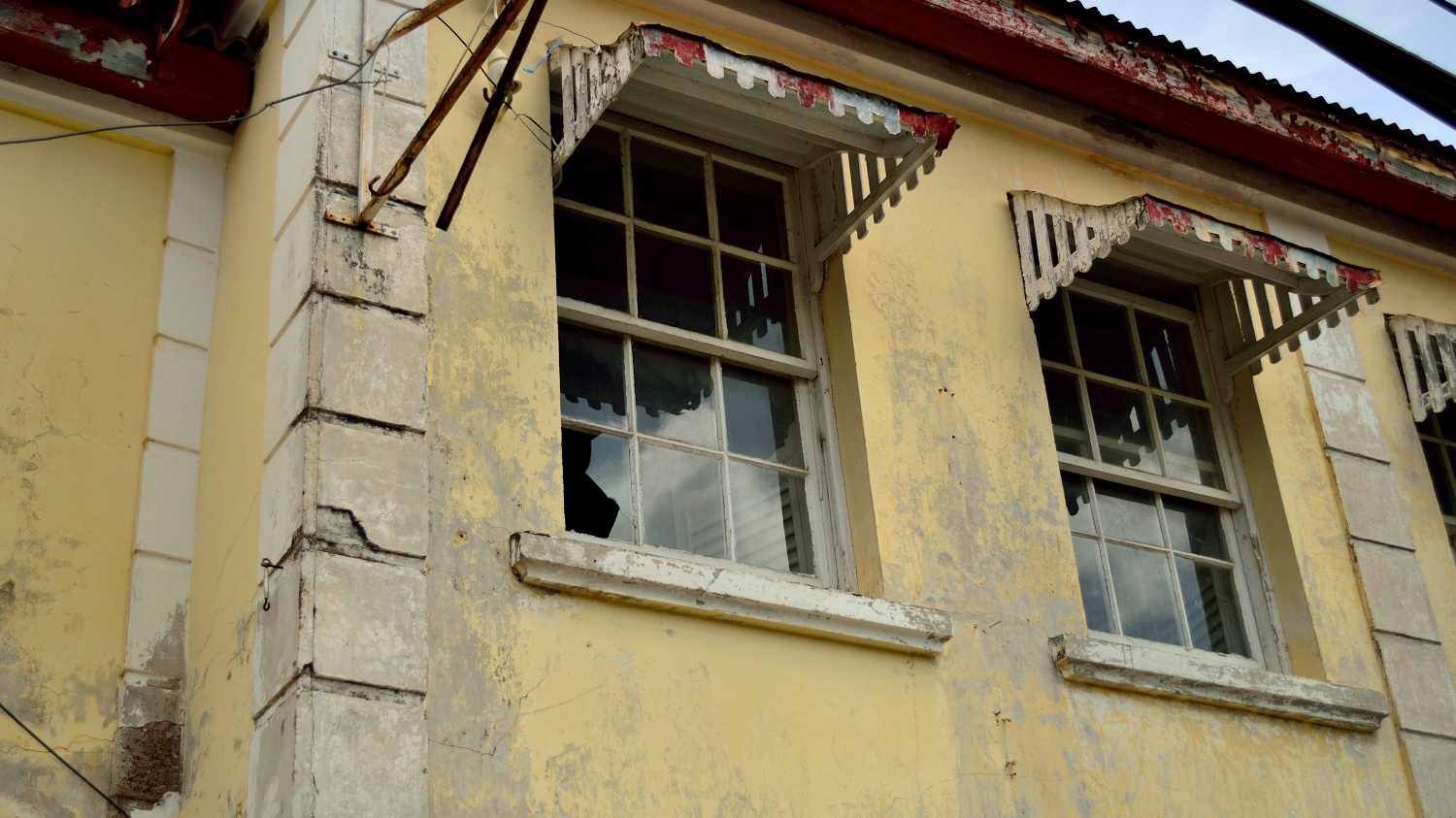 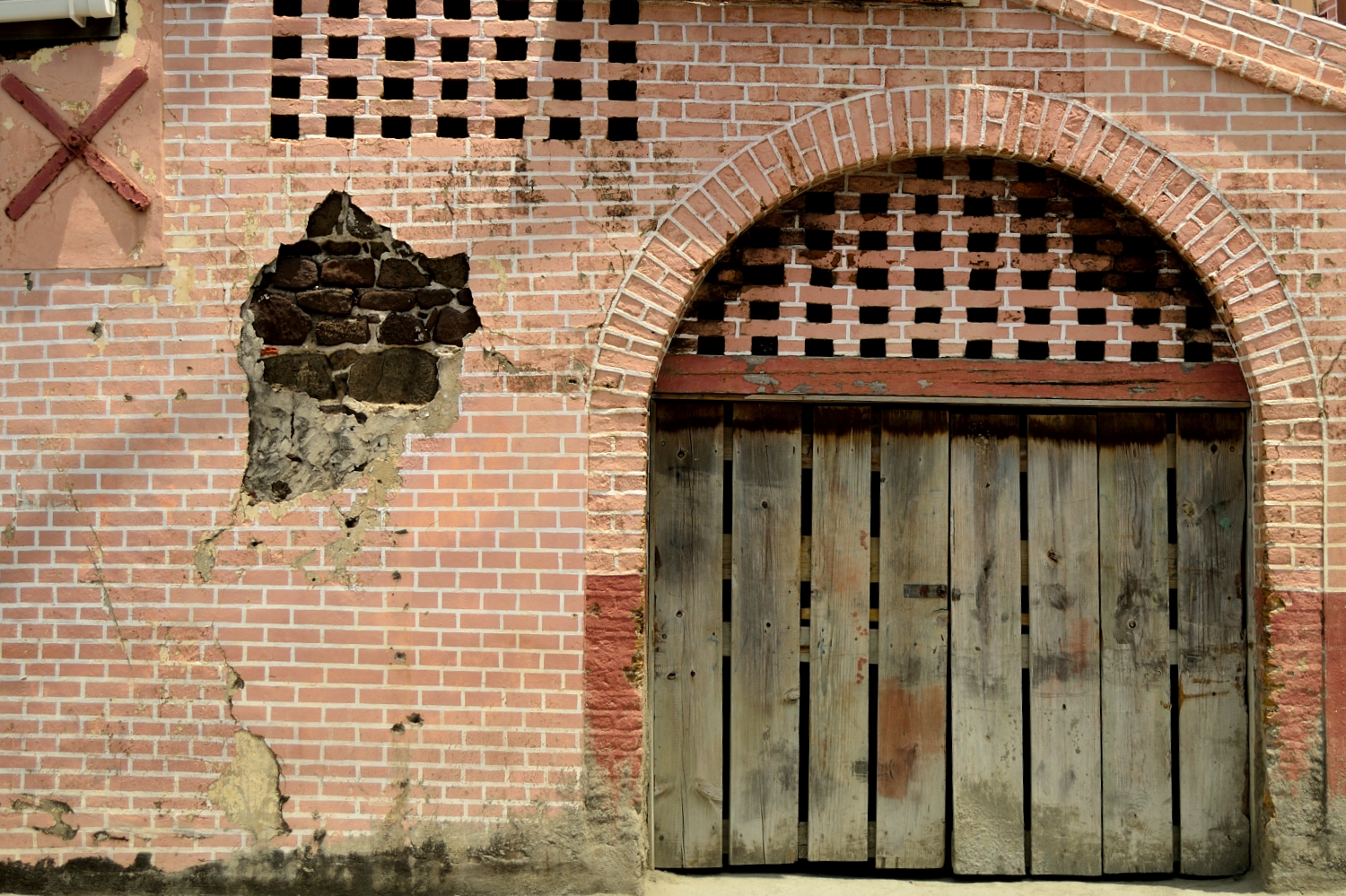