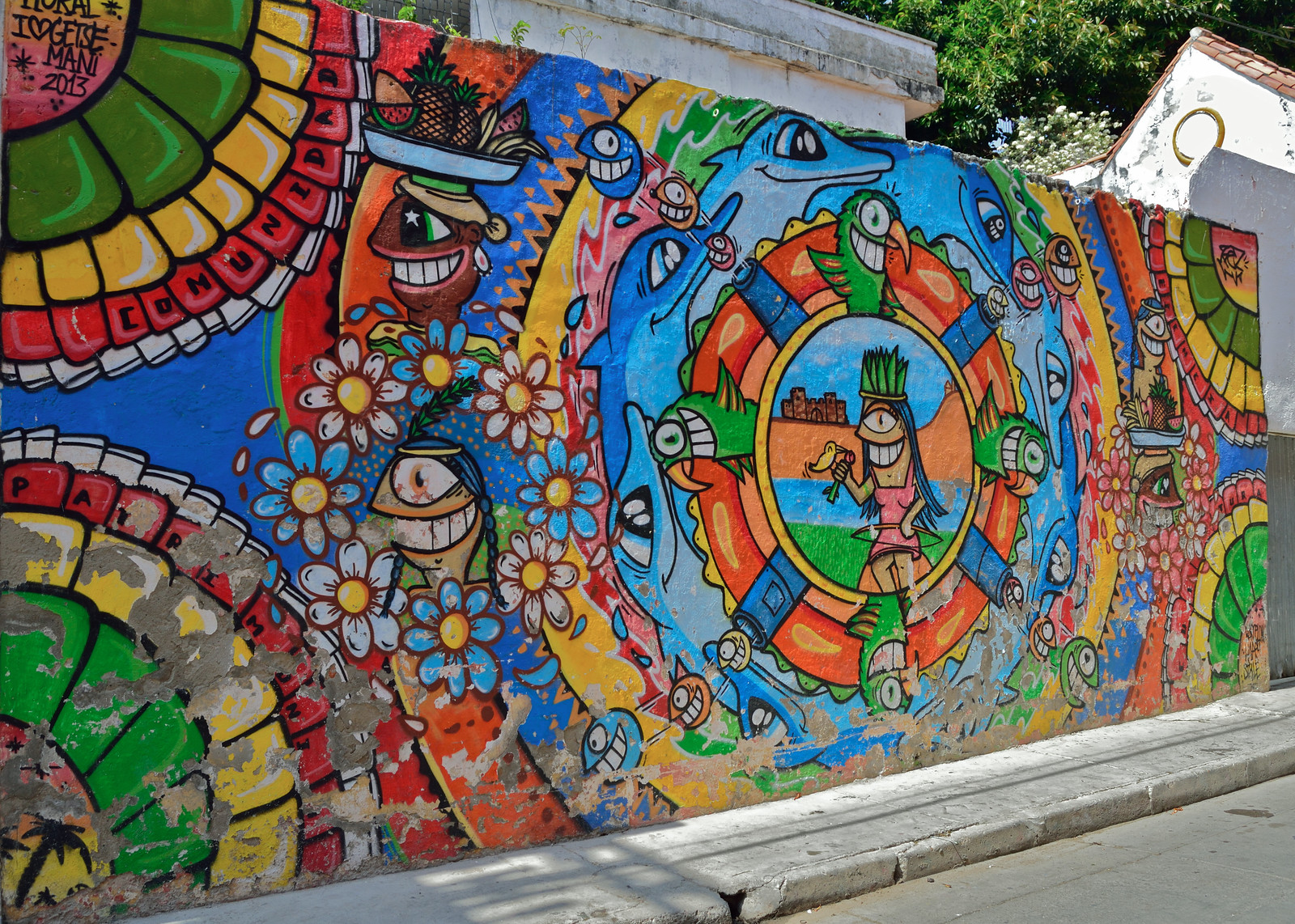 Getsemani used to be Cartagena de Indias’ impoverished slum area…this is where epidemics of cholera started in Gabriel Garcia Marquez’ book, Love inThe Time of Cholera. The city’s blacks lived here—slaves, servants, fishermen—in the low, marshy area next to the river, on the outskirts of the main walled city.
These days, Getsemani has risen from the ashes and fish offal to become Cartagena’s bohemian neighbourhood. Youth hostels, thumping bars and hip ethnic restaurants, the church plaza (Plaza de La Trinidad)  where locals and backpackers gather and mix in the evenings to make music, kick a ball around, stroll, ogle, smoke, eat, drink, discuss politics…the place hums with the activities of everyday neighborhood life, unwinding on streets flanked by colourful houses at least a hundred years old… 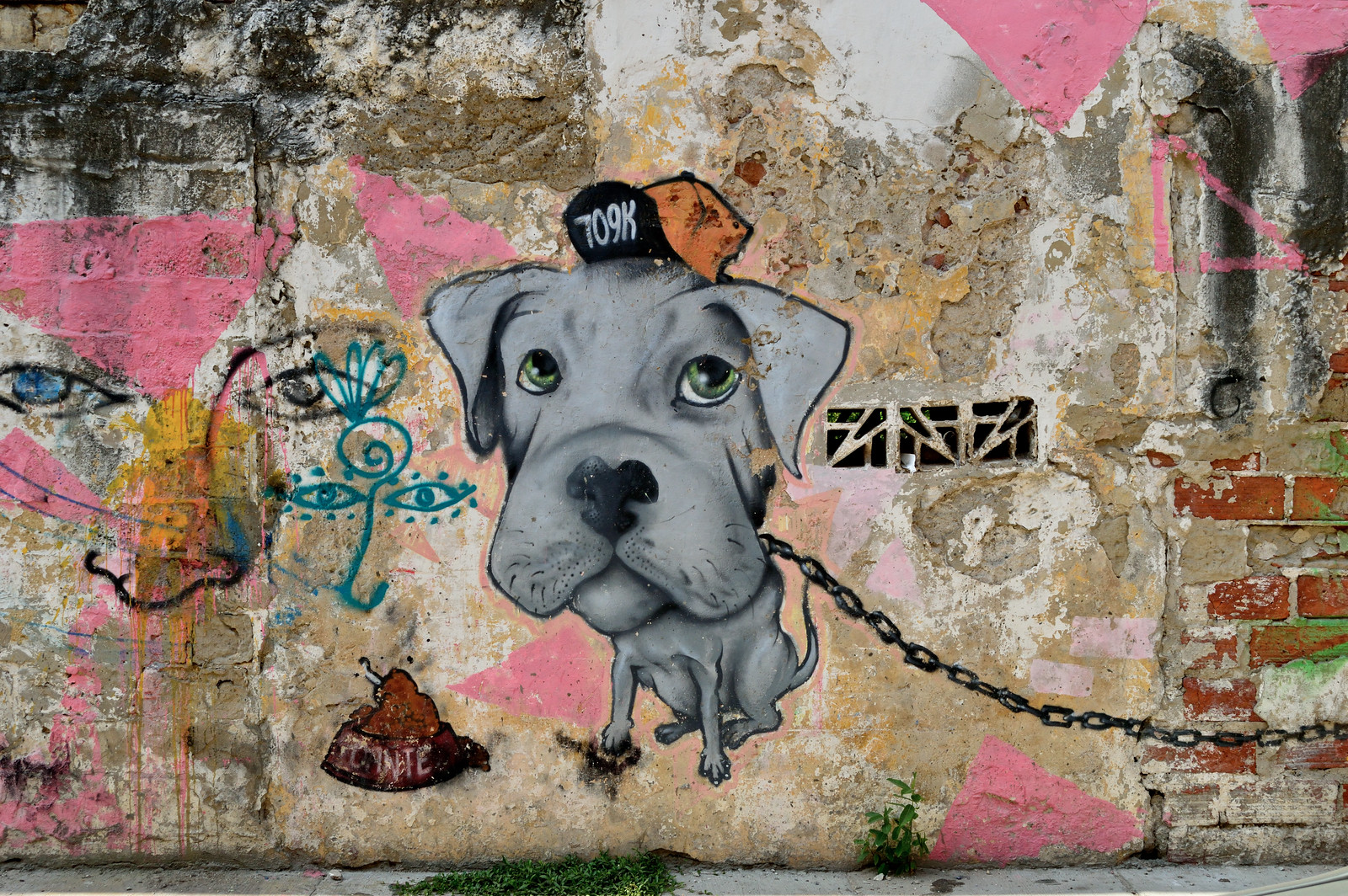 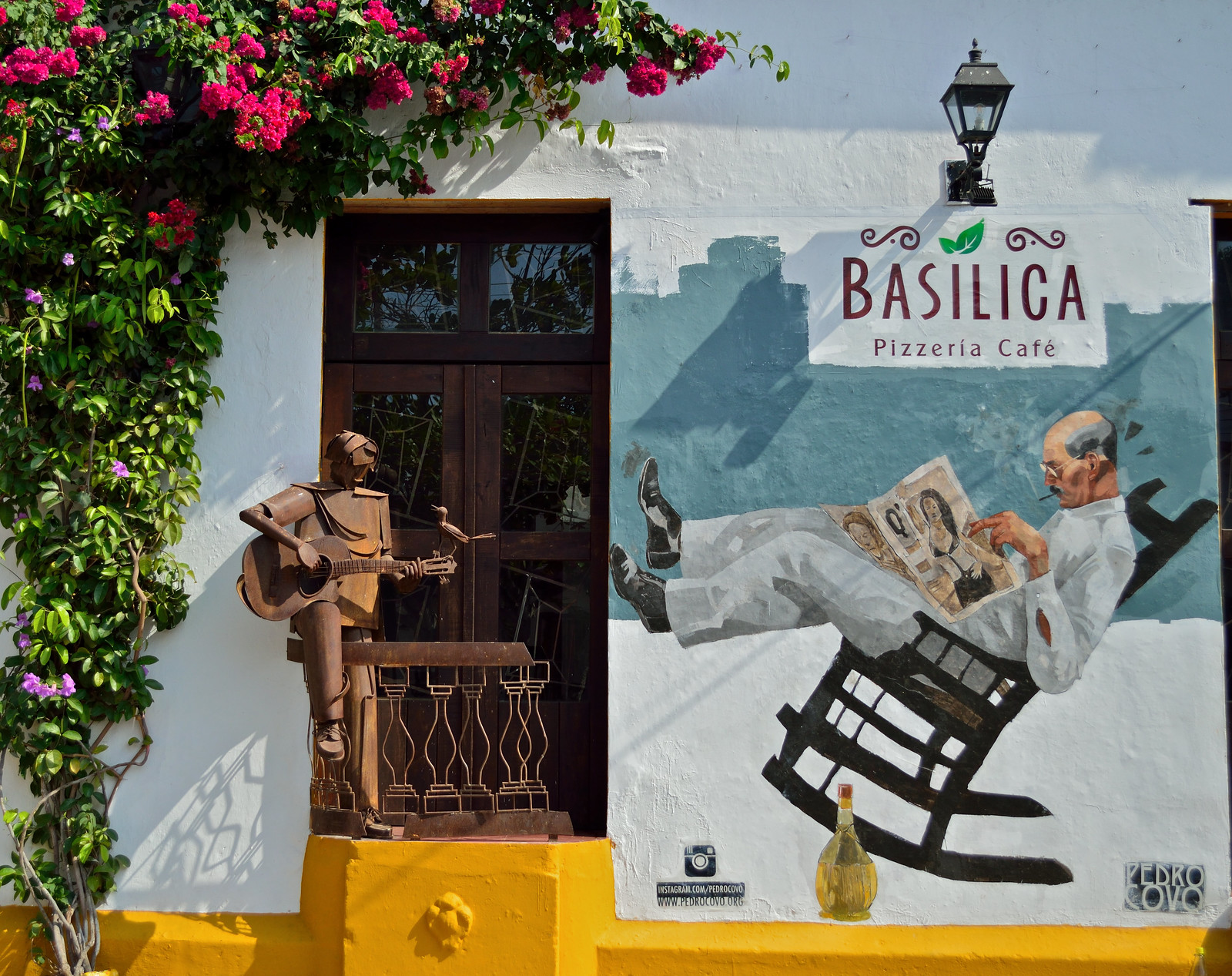 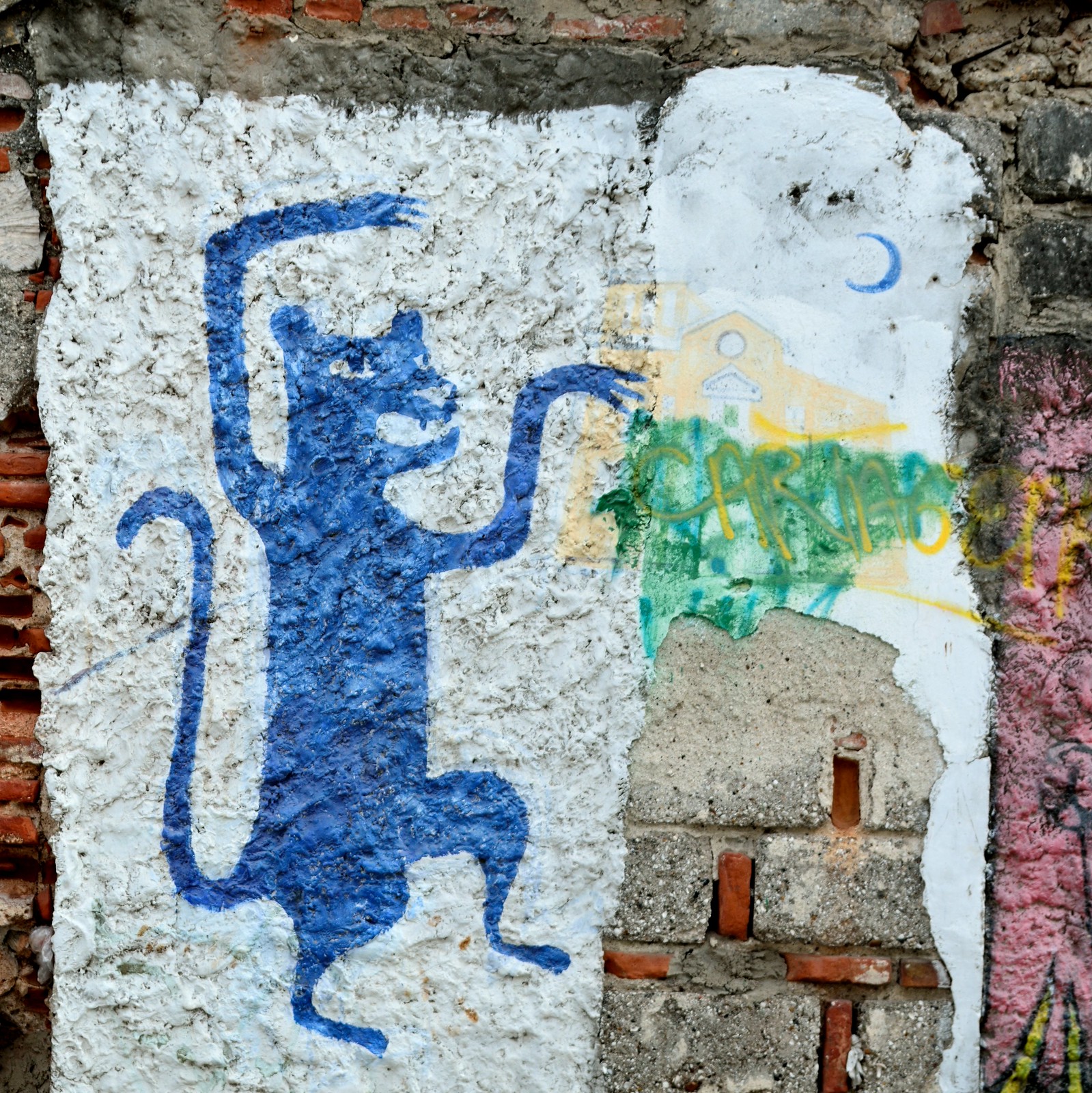 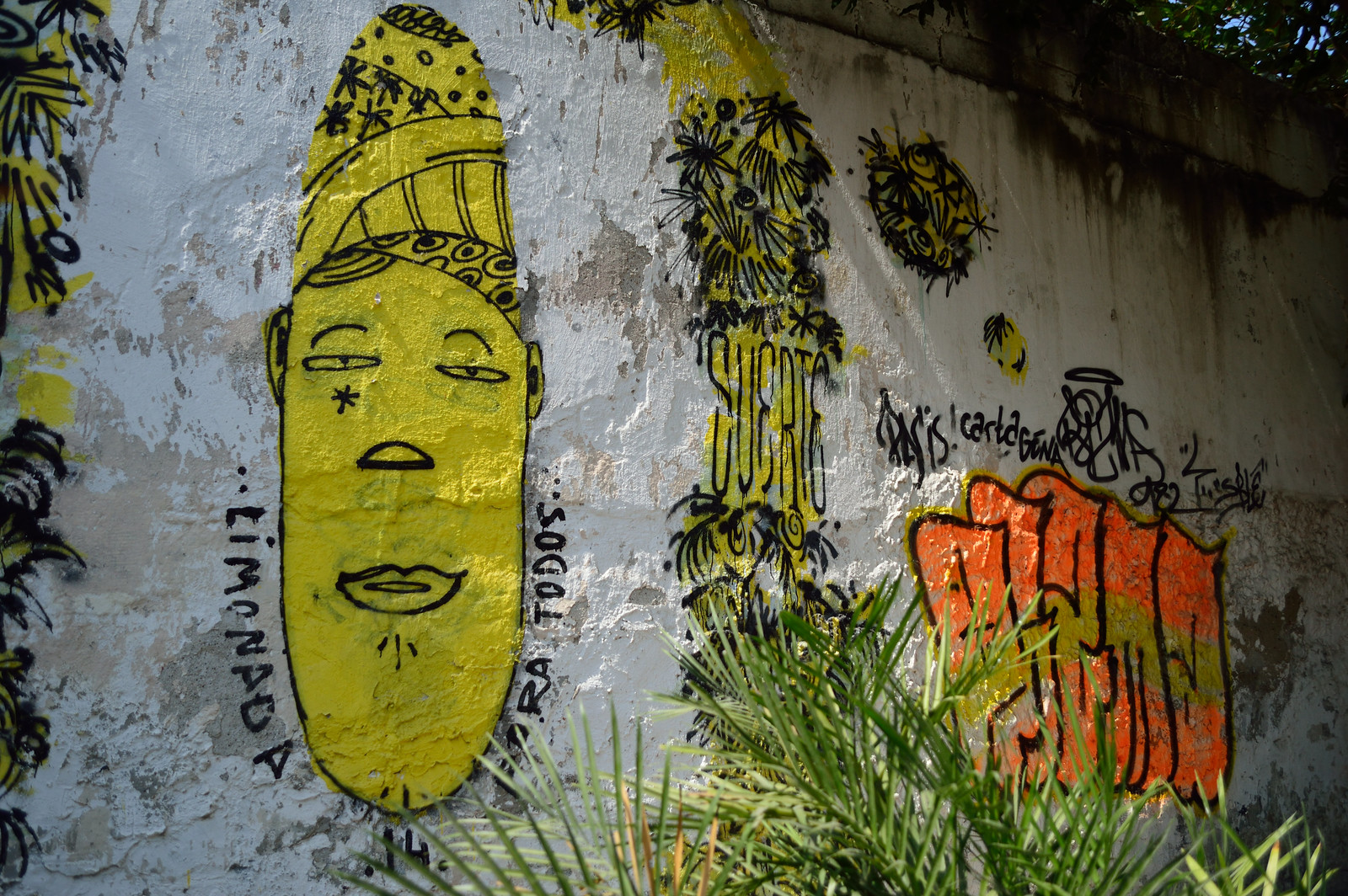 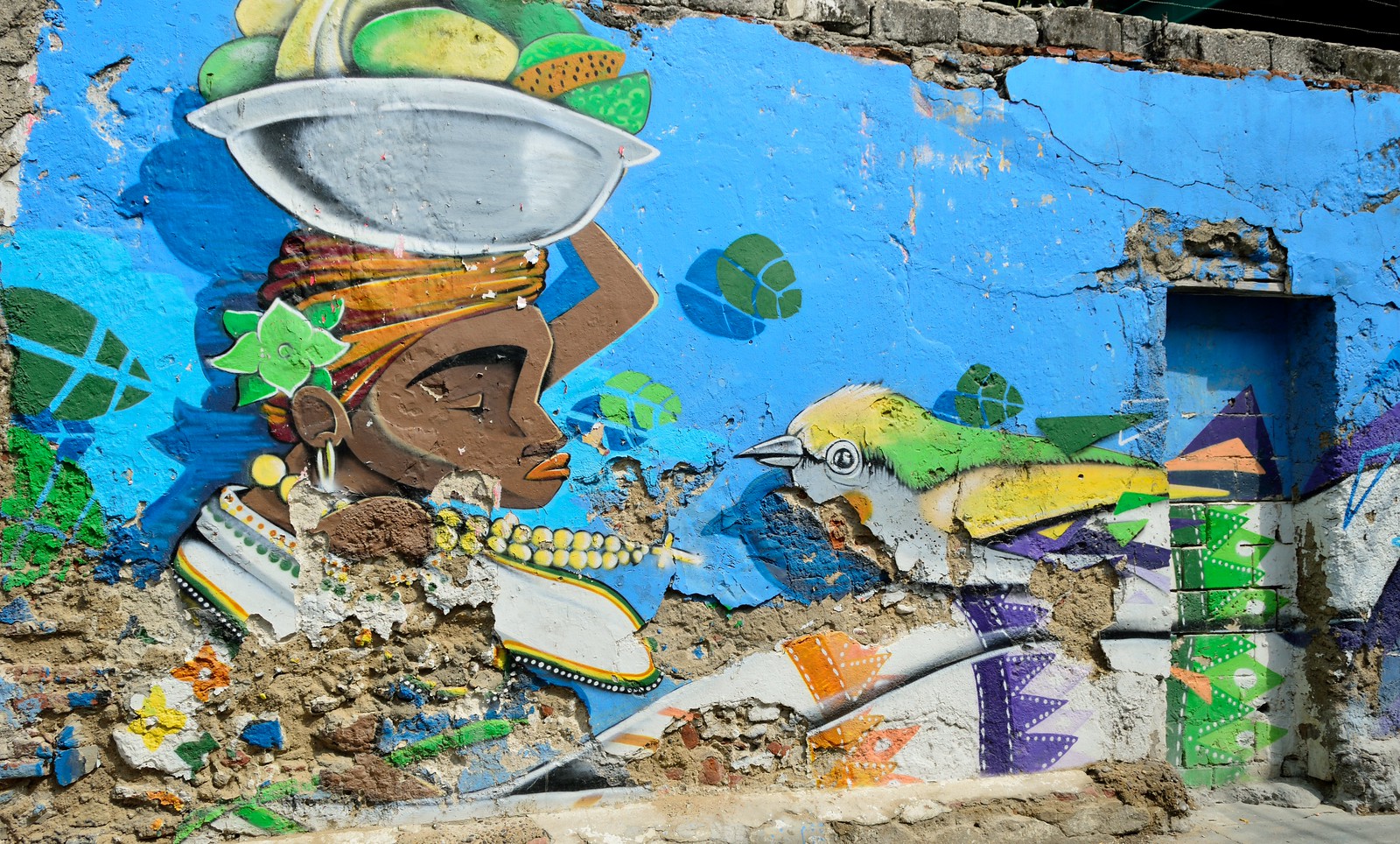 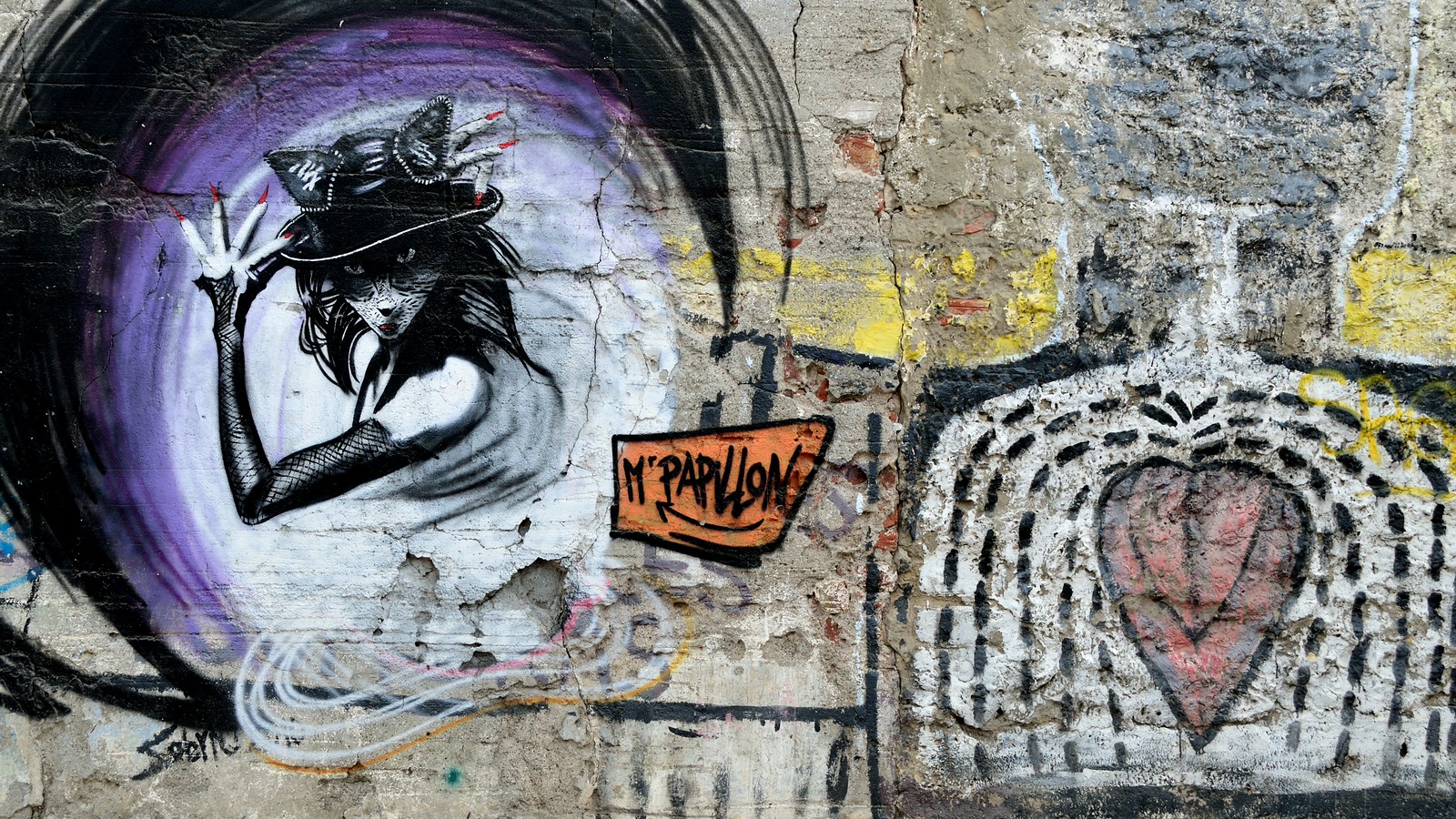 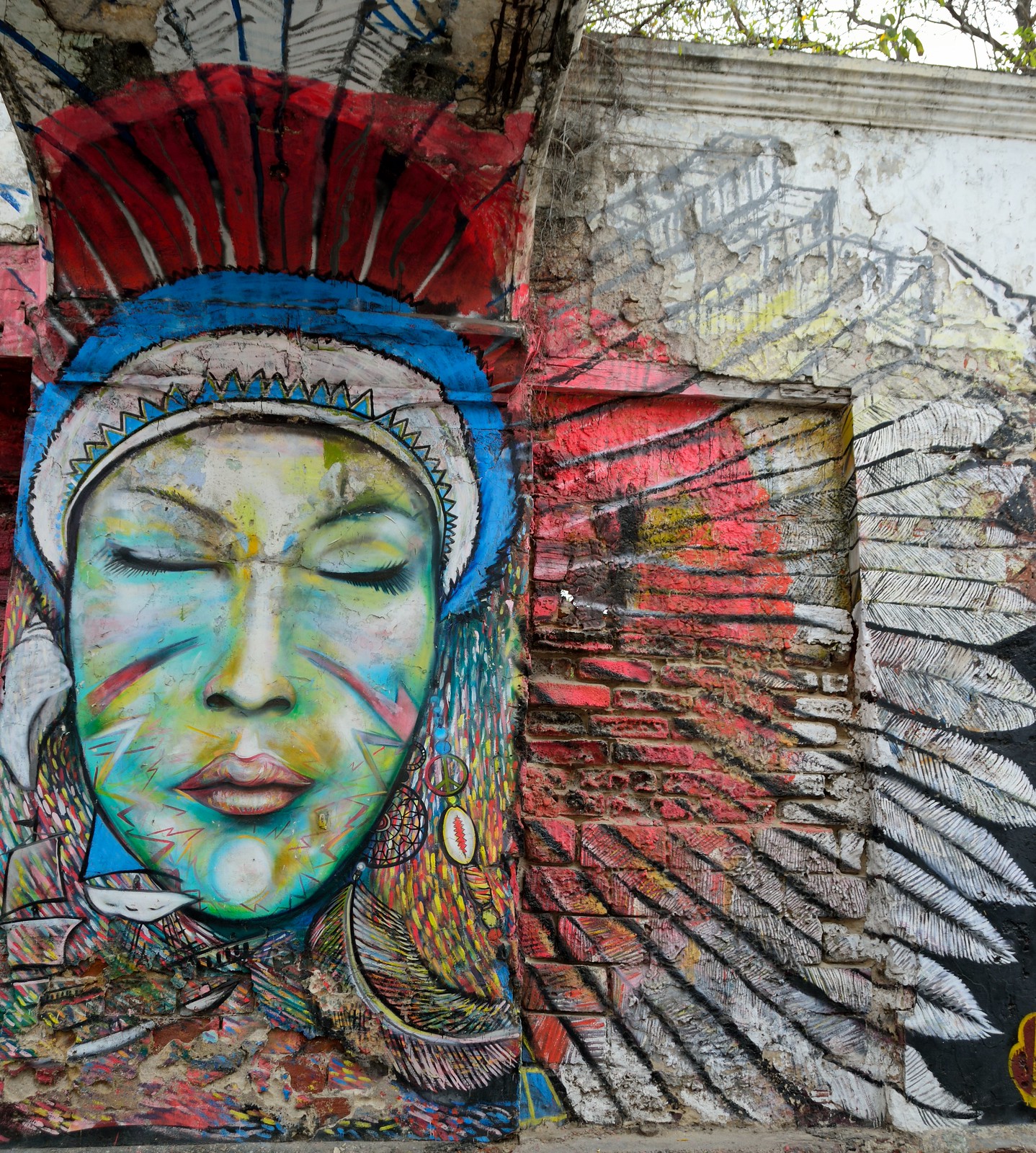 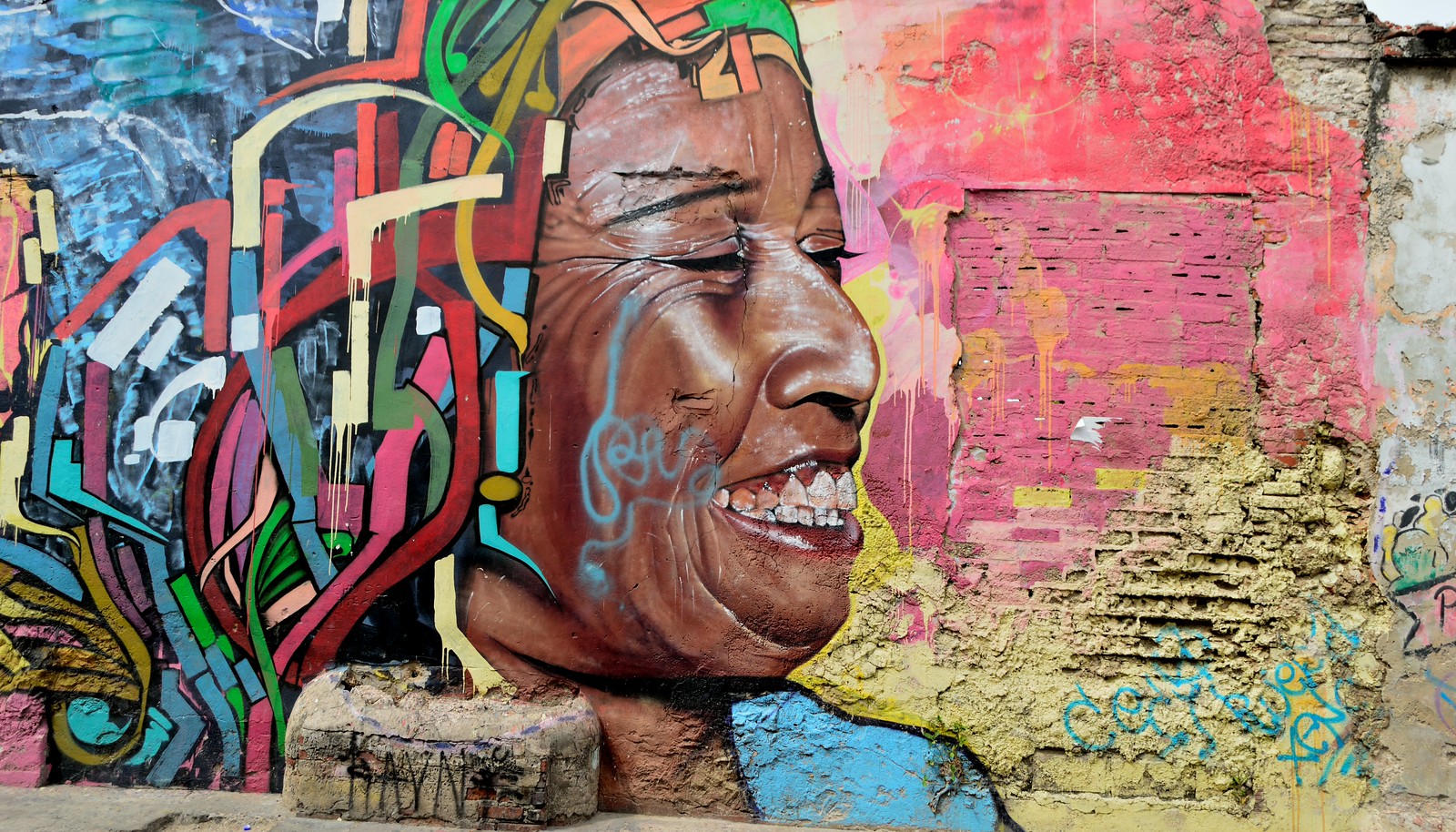 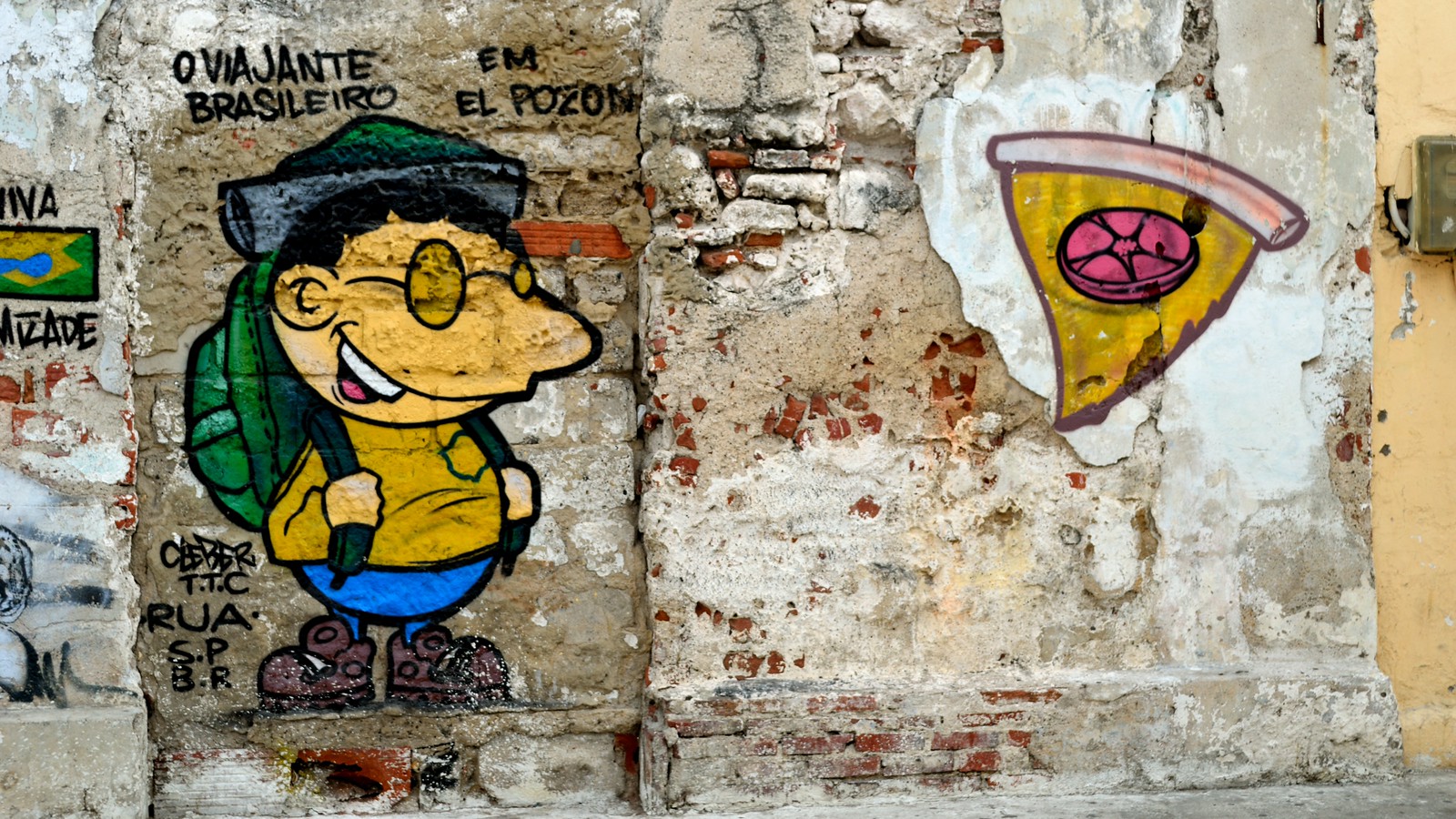 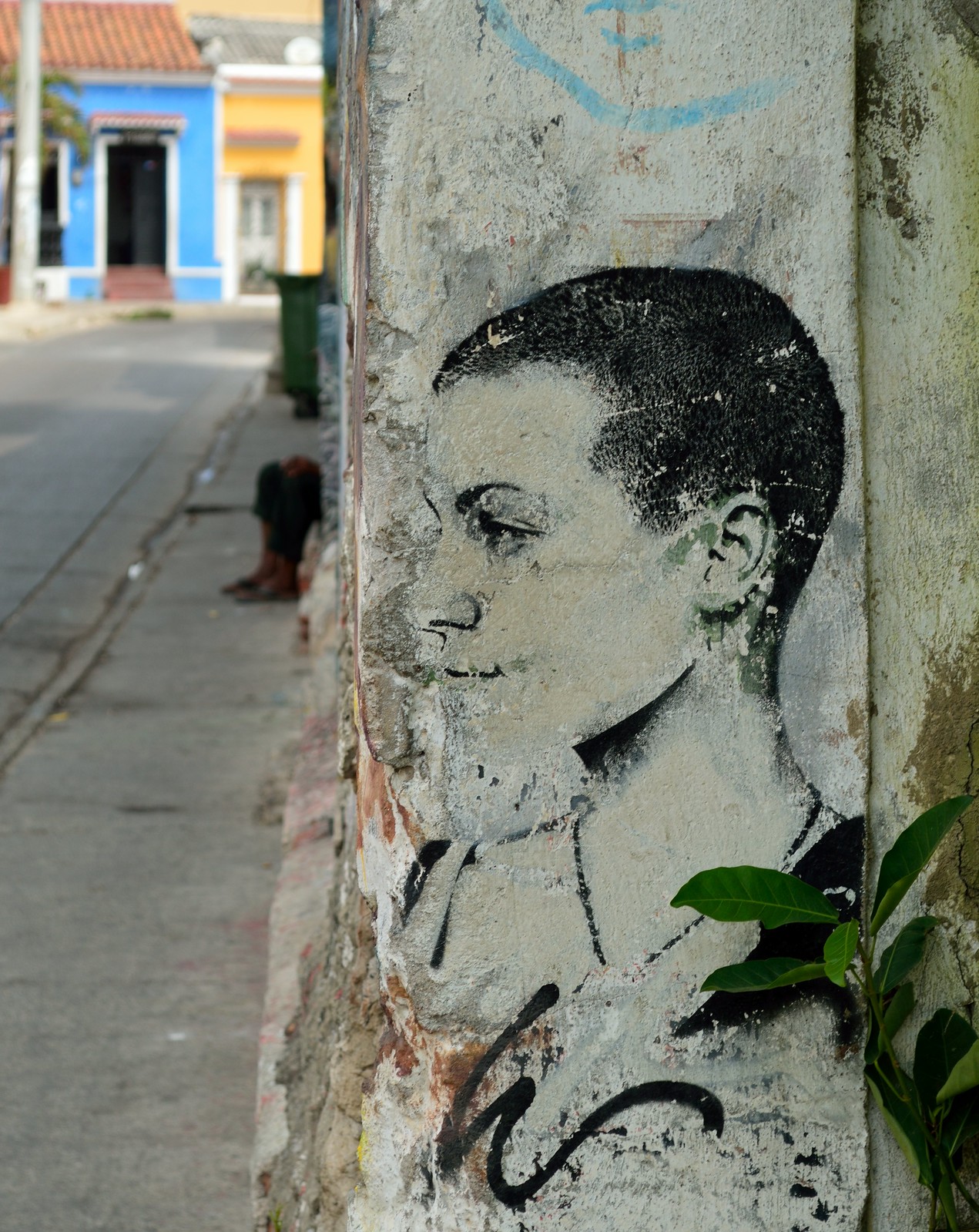 Believe it or not, this is what I have spent most of my evenings doing in Cartagena de Indias, Colombia:
Sitting on a sidewalk with my friend Liz, who makes and sells her jewelry to tourists and locals out for a stroll, while the nightly parade of freaks, street artists, vendors, young people, drunks, hookers, and horse-drawn coaches pass by.
It was a great way to fade into the local scene…my spanish improved a lot by talking for hours to Liz, her friends, and other craftspeople selling on the street with us. I enjoyed watching the Vanity Fair drift past. Some nights I would bring a bottle of wine, a couple of wine glasses, an herb-infused round of mozzarella, crackers and olives, and we would share our fancy sidewalk fare with a couple other women, talk about music and literature and metaphysics and love… 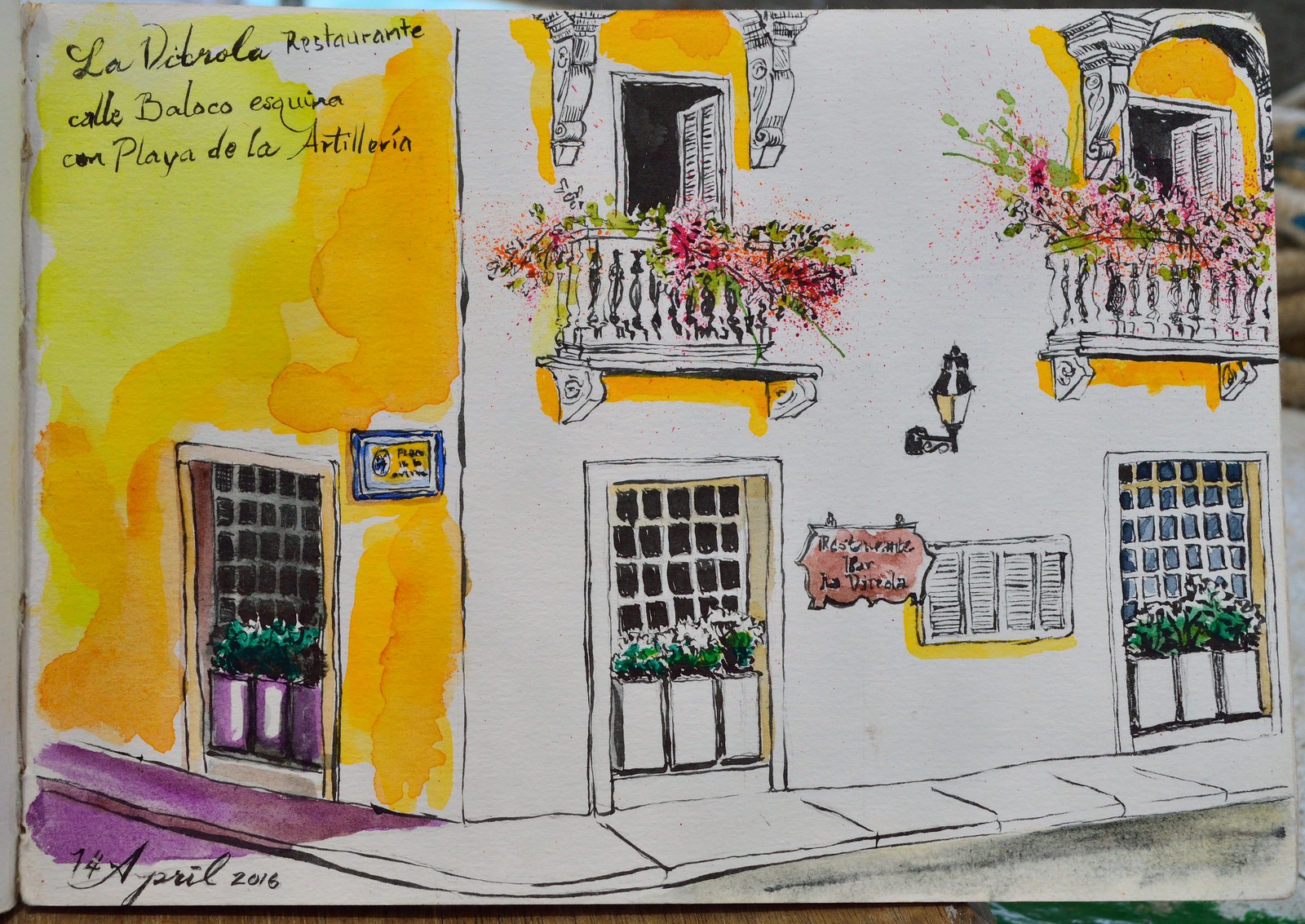 Cartagena de Indias’ oldest operating restaurant, La Vitrola stands on the corner of Calle Baloco and Playa de la artilleria (Artillery Beach). It is said to be the best restaurant in Cartagena, and among the best in Colombia, though I couldn’t tell you as I have never eaten there (reservations till the end of June, strict dress codes, no children allowed, average price of dinner between 40 and 80 dollars) and when I drew this I sat on the ramparts across the street, eating my pastel de pollo lunch (like a tamale of rice and chicken, wrapped and cooked in banana leaves) which I buy, most days, from an old man who pushes a cart around and cries his wares in three notes, like the call of some bird: “pas-TE-LES!” 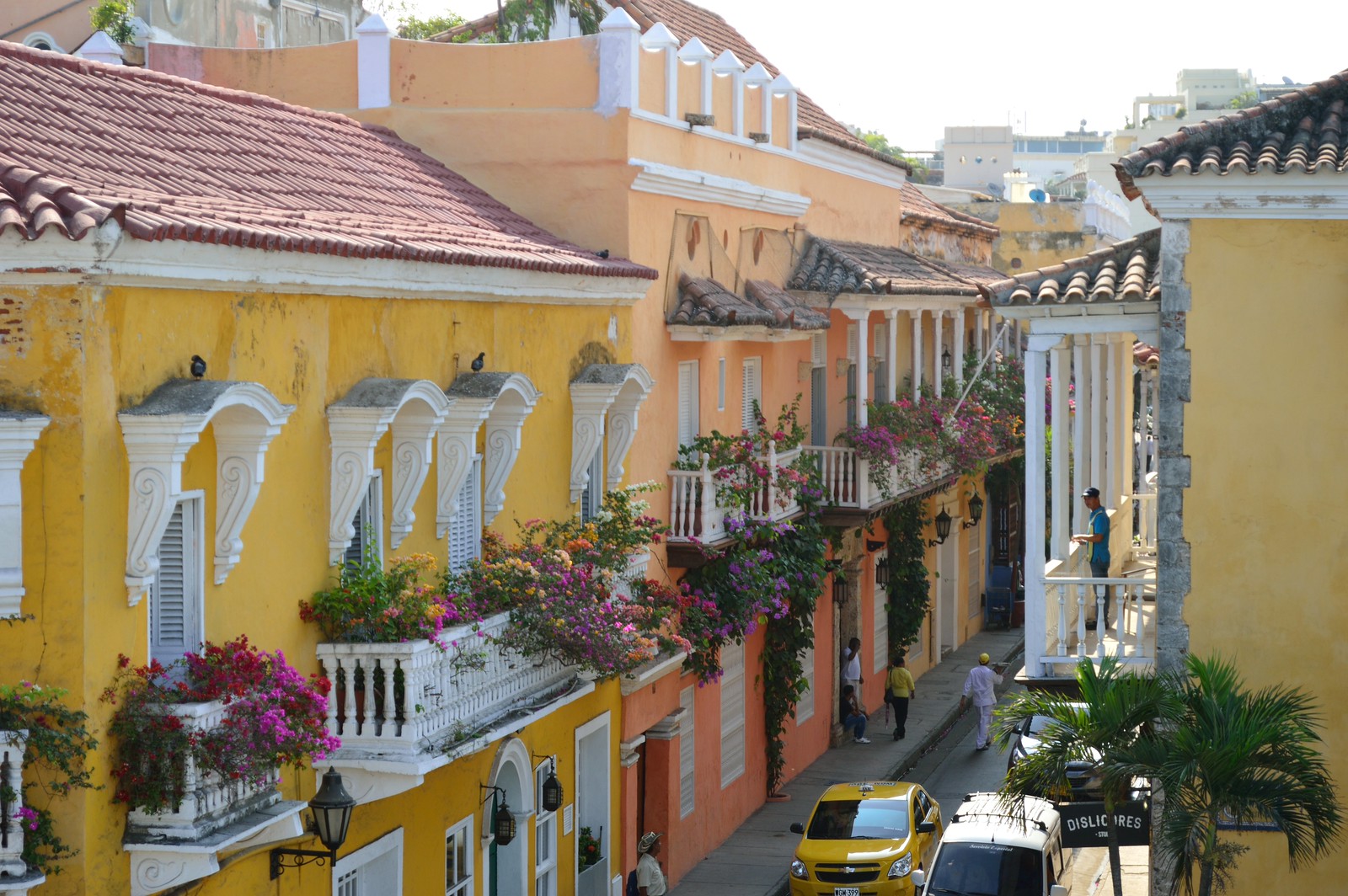 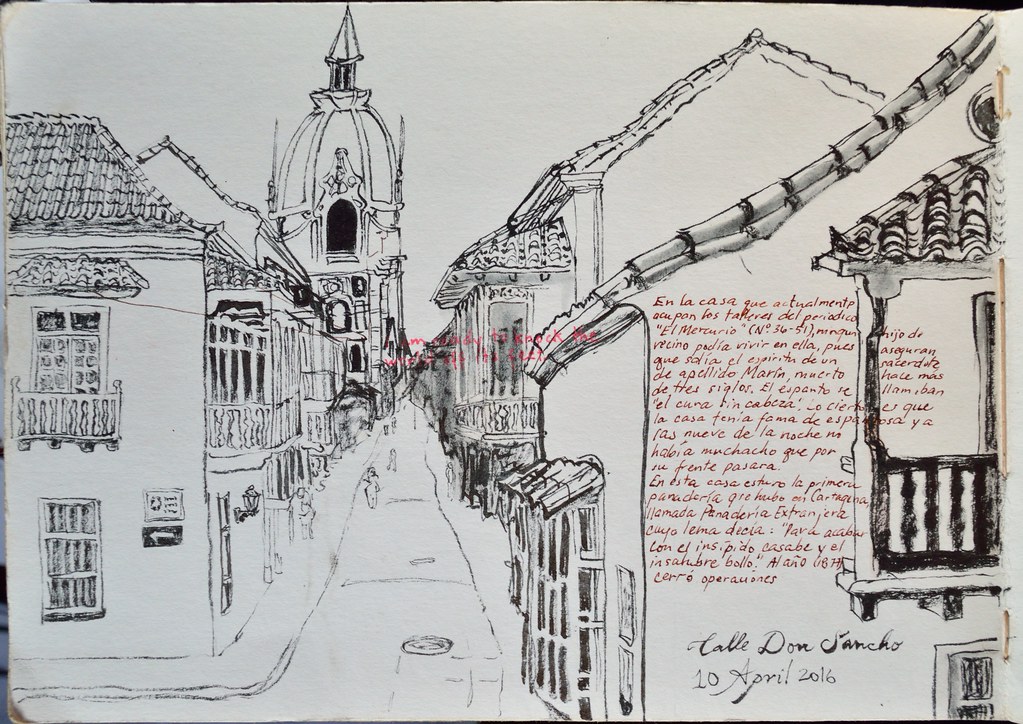 I drew this looking down calle Don Sancho from a tiny spot of shade along the murallas (the stone walls that surround the fortified city) in the midday heat. You can tell I was deeply  impressed by the cathedral’s dome, as I seem to have drawn it twice as large as it should be…it’s all dome, and no church underneath!

One of the most entertaining ways to explore Cartagena de Indias is through books. Besides  reading two novels, simultaneously, by Gabriel Garcia Marquez that are set in the Cartagena of old, I spend my evenings reading a marvellous book called “Plazas y Calles de Cartagena”, written in the 1940s by Raul Porto…one of the city’s respectable, scholarly and most avid citizens. In it are gathered the histories, nomenclature, legends, rumours and quotidian information of every single street in the historical centre and Getsemani

Of calle Don Sancho the book says: “no young person of the neighborhood could possibly survive in house No. 36-51 (currently occupied by the offices of ‘El Mercurio’) because of the headless ghost of a priest named Marin, dead for more than three centuries, that was sure to appear. One thing is certain, the house has a reputation for being haunted, and by 9 in the evening there is no young man that will come near it…”

Walking these old streets with all these marvellous stories rattling around in my head adds yet another layer of fascination to the experience, and where other visitors may be standing in a nondescript cobbled plaza between park and church, I thrill with my ‘special insider’s knowledge’ that I am standing on the spot where the conquistador Pedro Heredia’s house (he is the founder of the city, and his was the first house of stone ever built) used to be. Eavesdropping on city tours I can confidently say that not one of the local guides herding tourists around has ever given such a detailed and interesting narrative of the town as reading a couple of books does.

The heat was so withering up on the bare battlements that I caved in and bought a hat–my first!–from one of the many vendors who prowl the walls, pestering tourists–the only people crazy enough to walk around the fortifications at high noon. 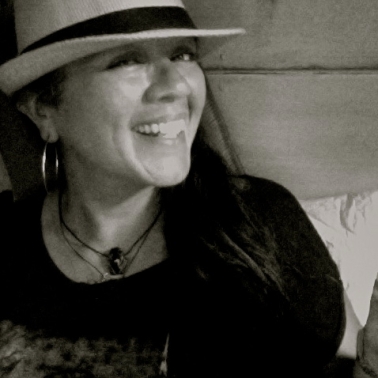 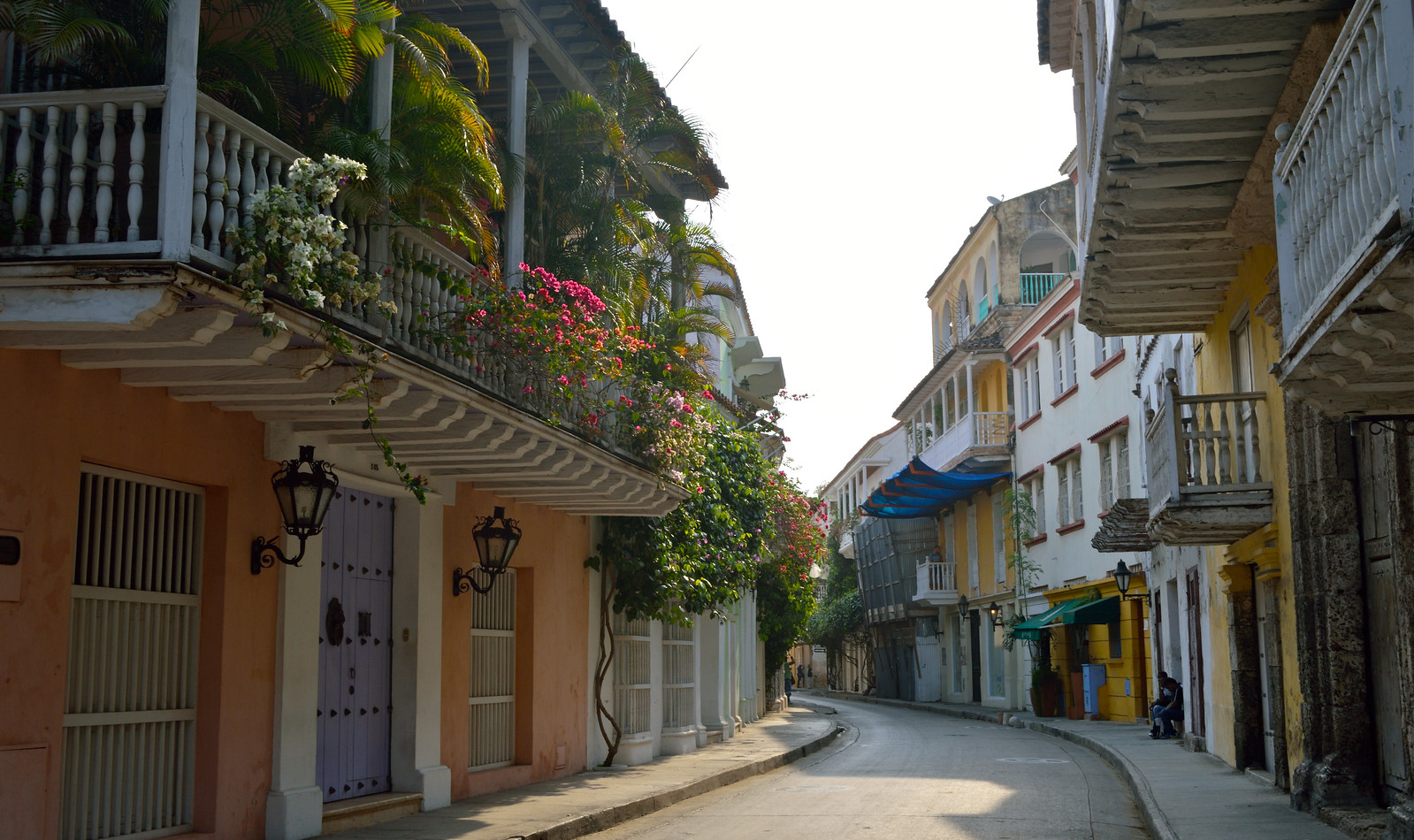 Verandas, terraces, balustrades, patios…Cartagena de Indias, Colombia is a theater stage where the people who lived in the mansions could watch life passing on the streets, and the crowds on the streets could look up and watch the members of society as they leaned over the turned-wood laths of their balconies. 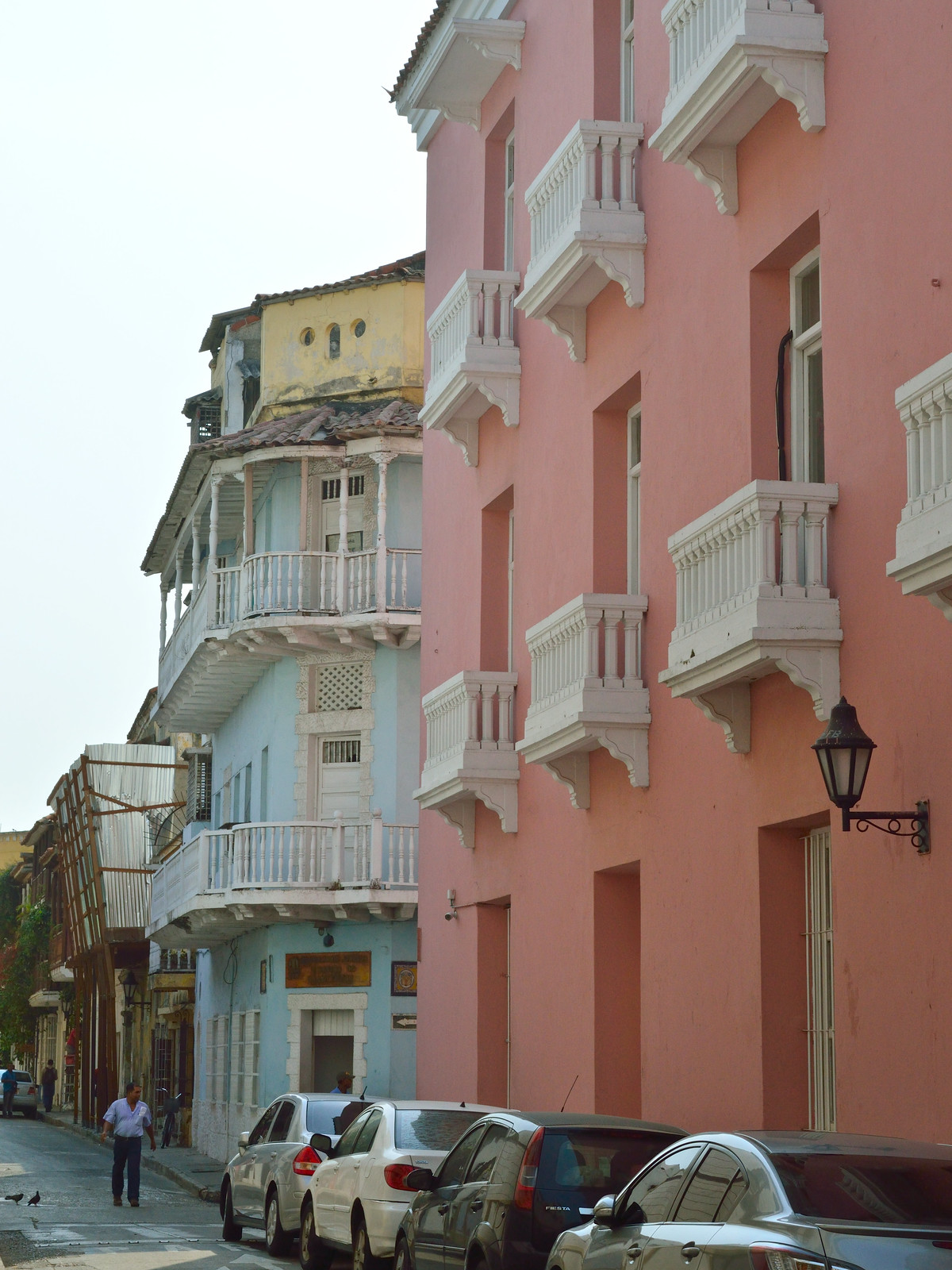 Especially beautiful are those balconies from which heat-loving bougainvilleas and other tropical ramblers come cascading down in a thick froth of flowers and foliage that, on certain houses, can take your breath away. 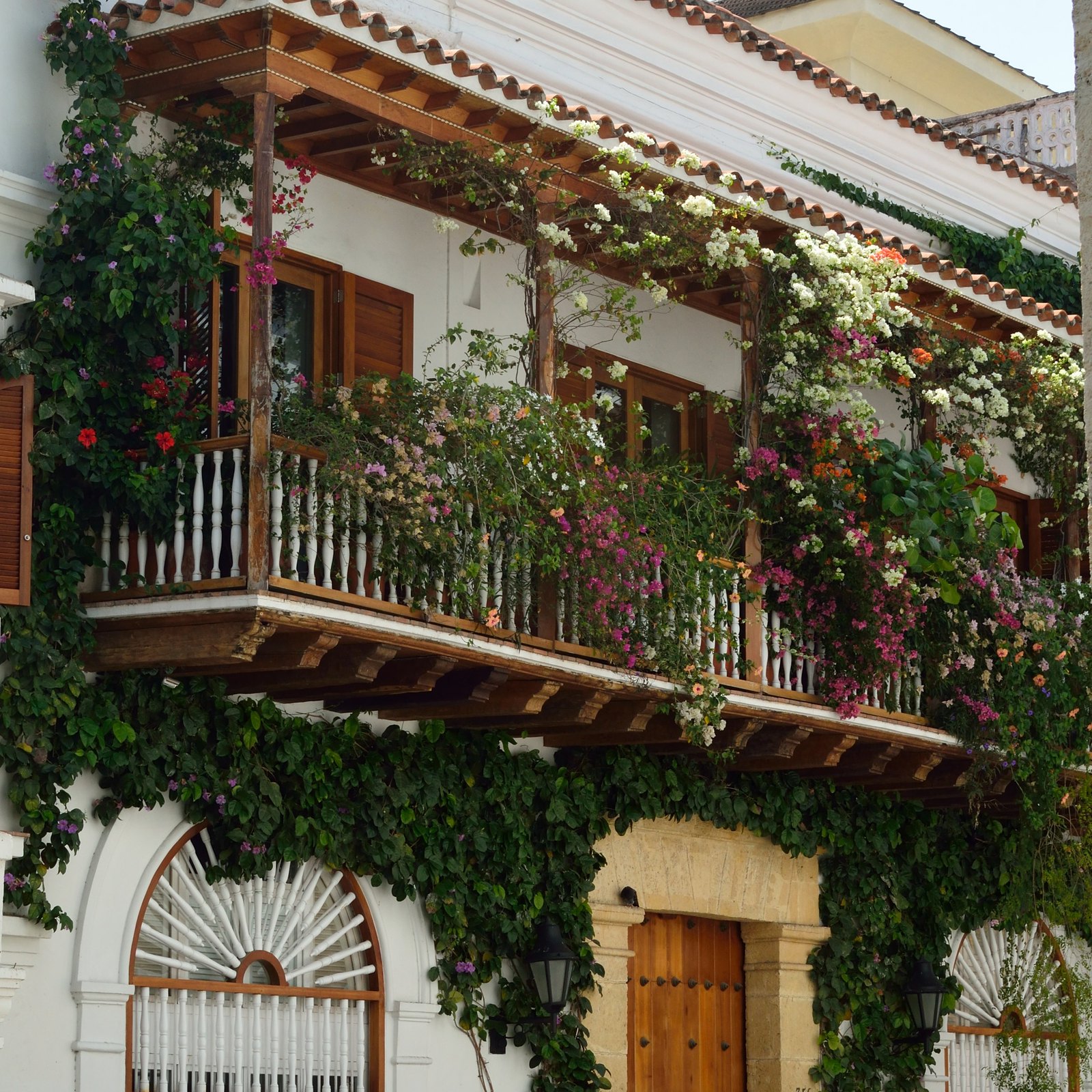 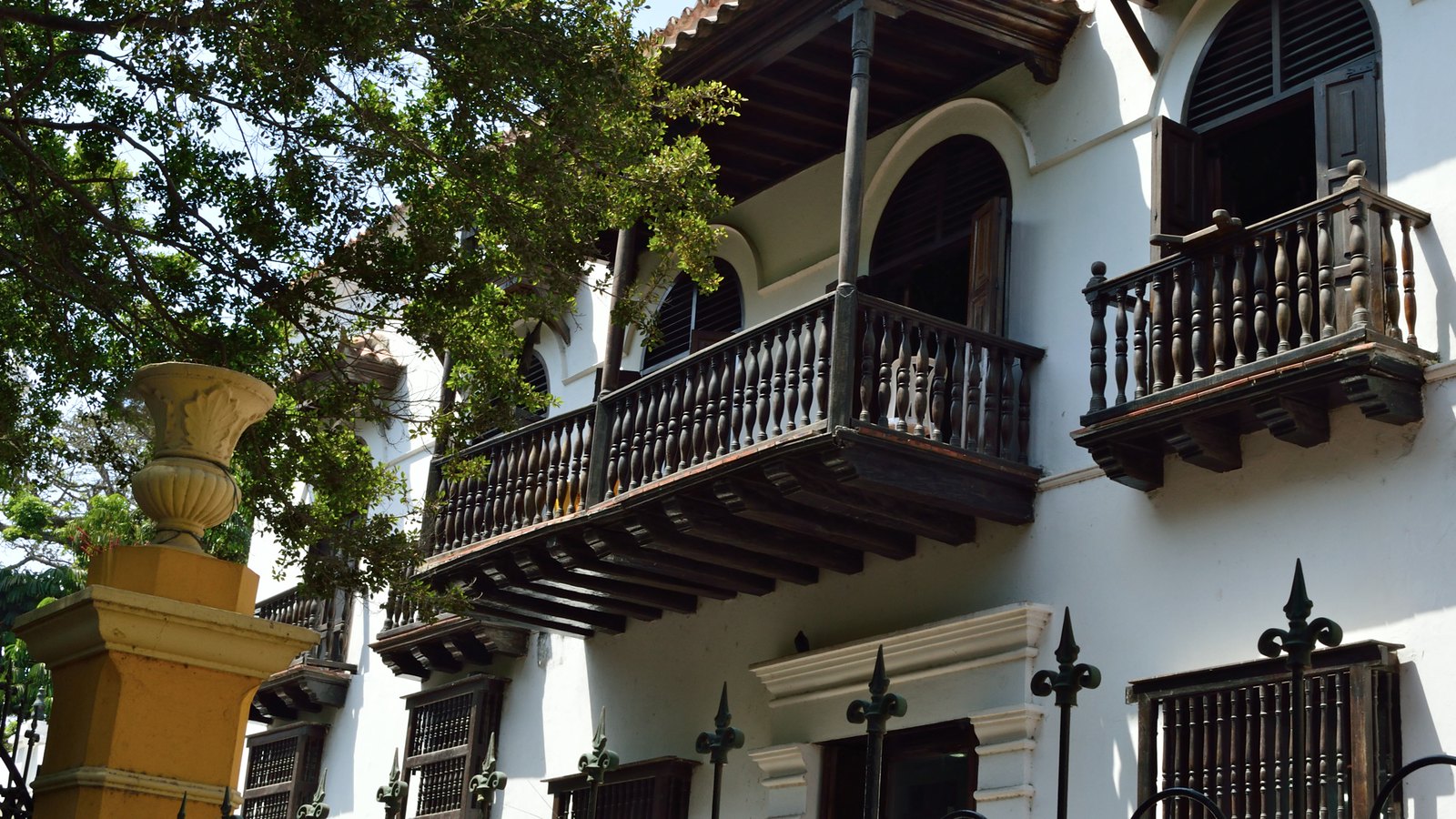 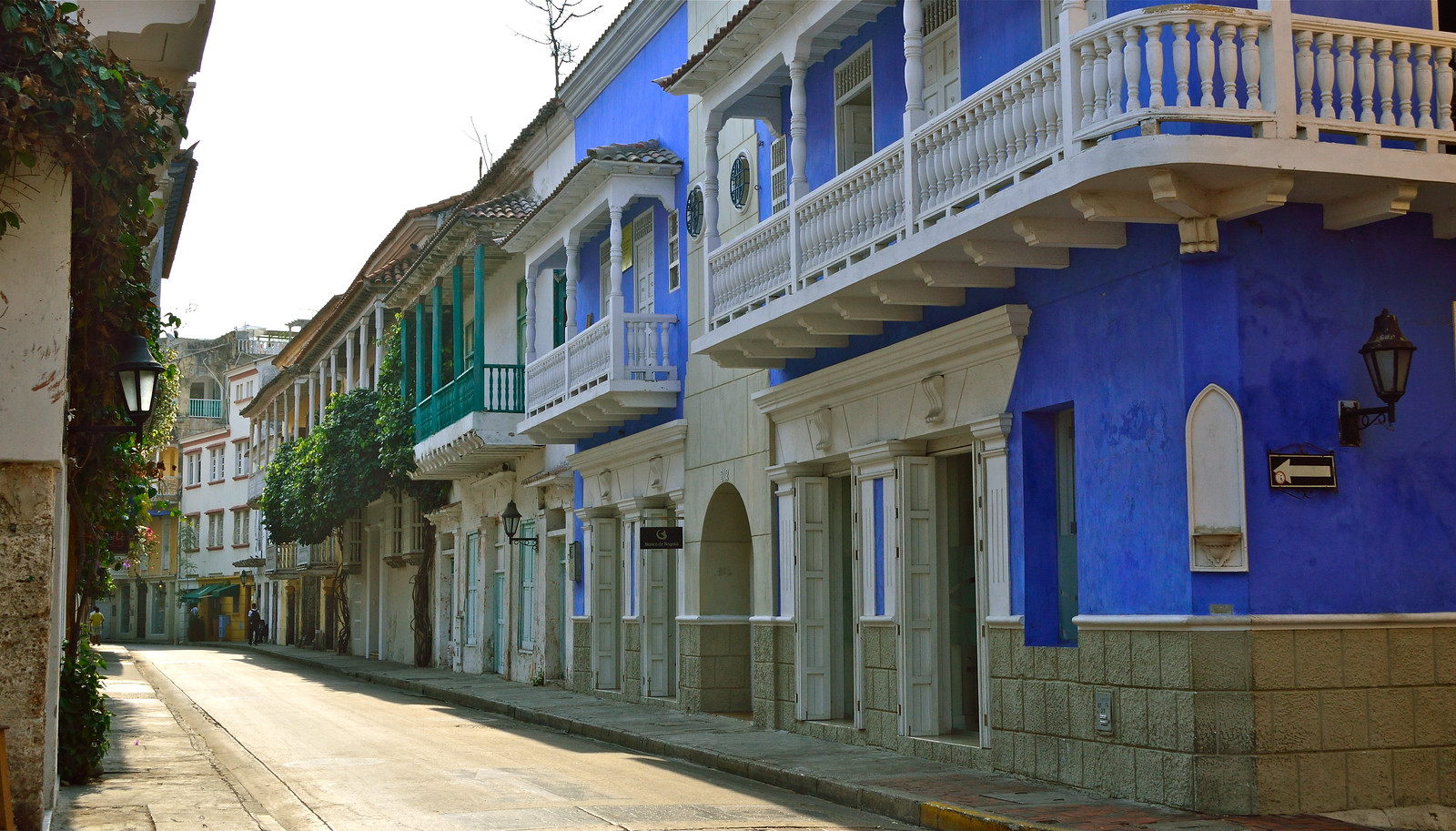 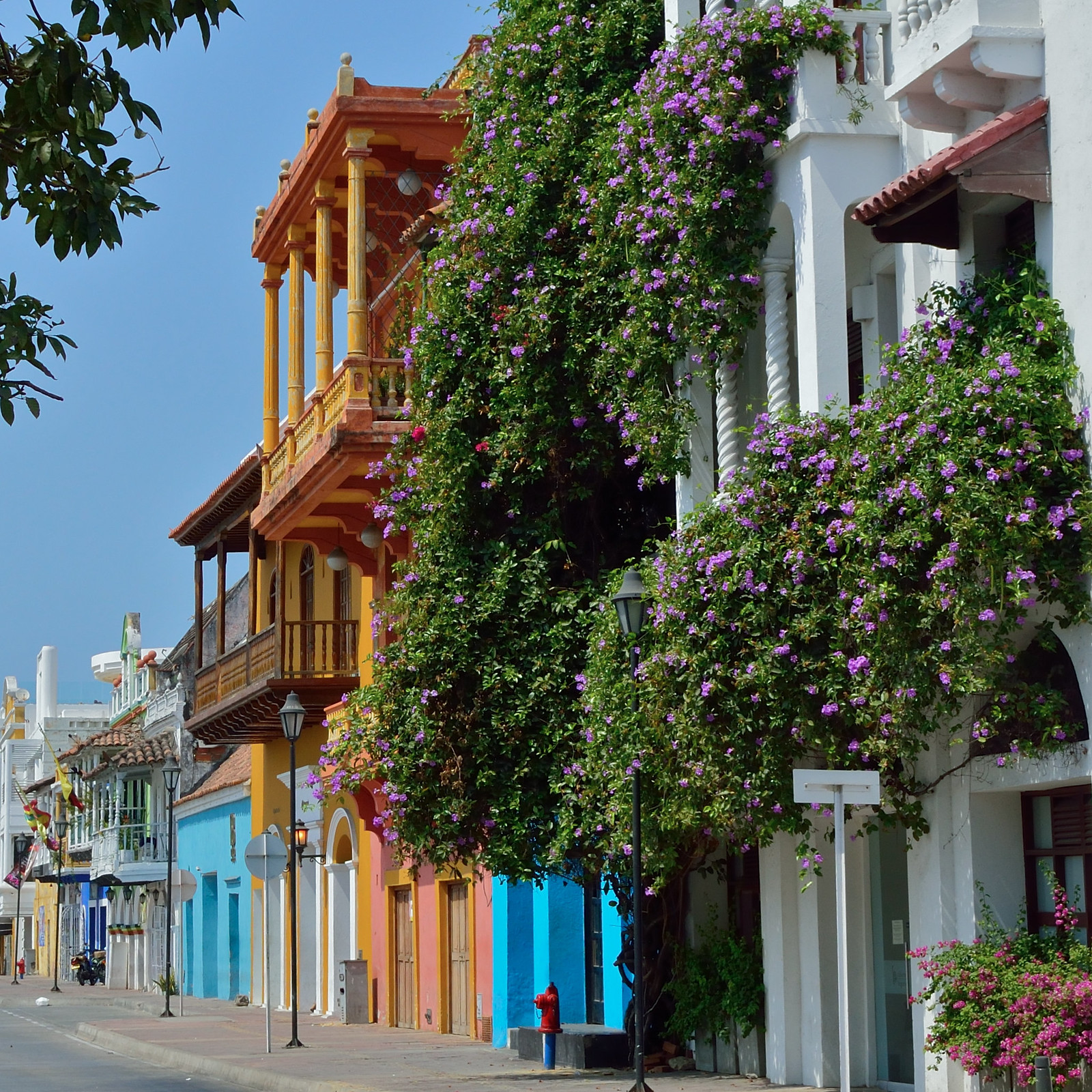 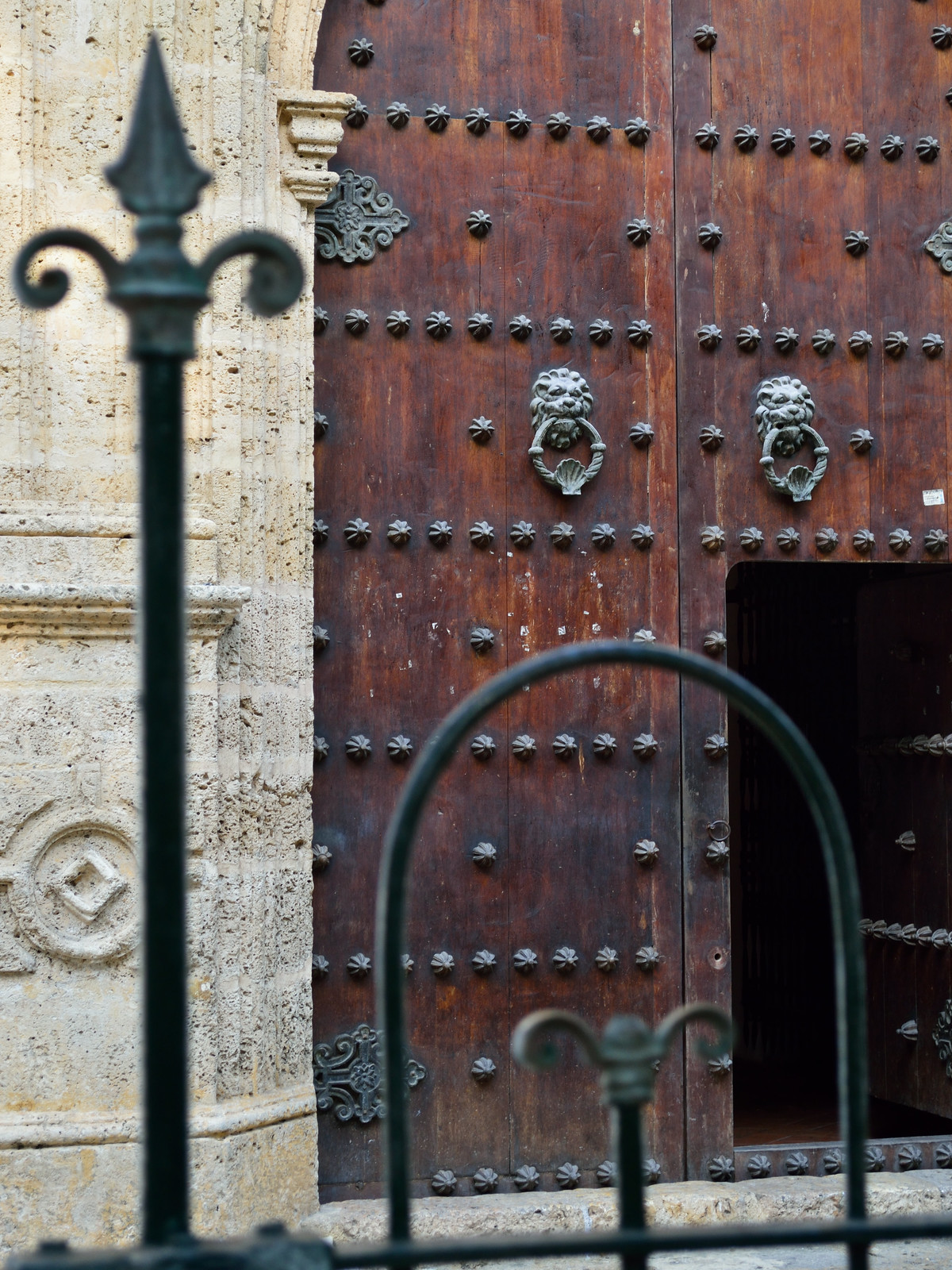 The hundreds of aldabas (doorknockers) of Cartagena are made in bronze or iron.

In colonial times, they were important indicators of the wealth and status of the family, informing passerby of how they’d made their money. Lions indicated the military; fish, mermaids and dolphins were symbols of merchants; lizards (dragons) hinted at ties to Spanish royalty. 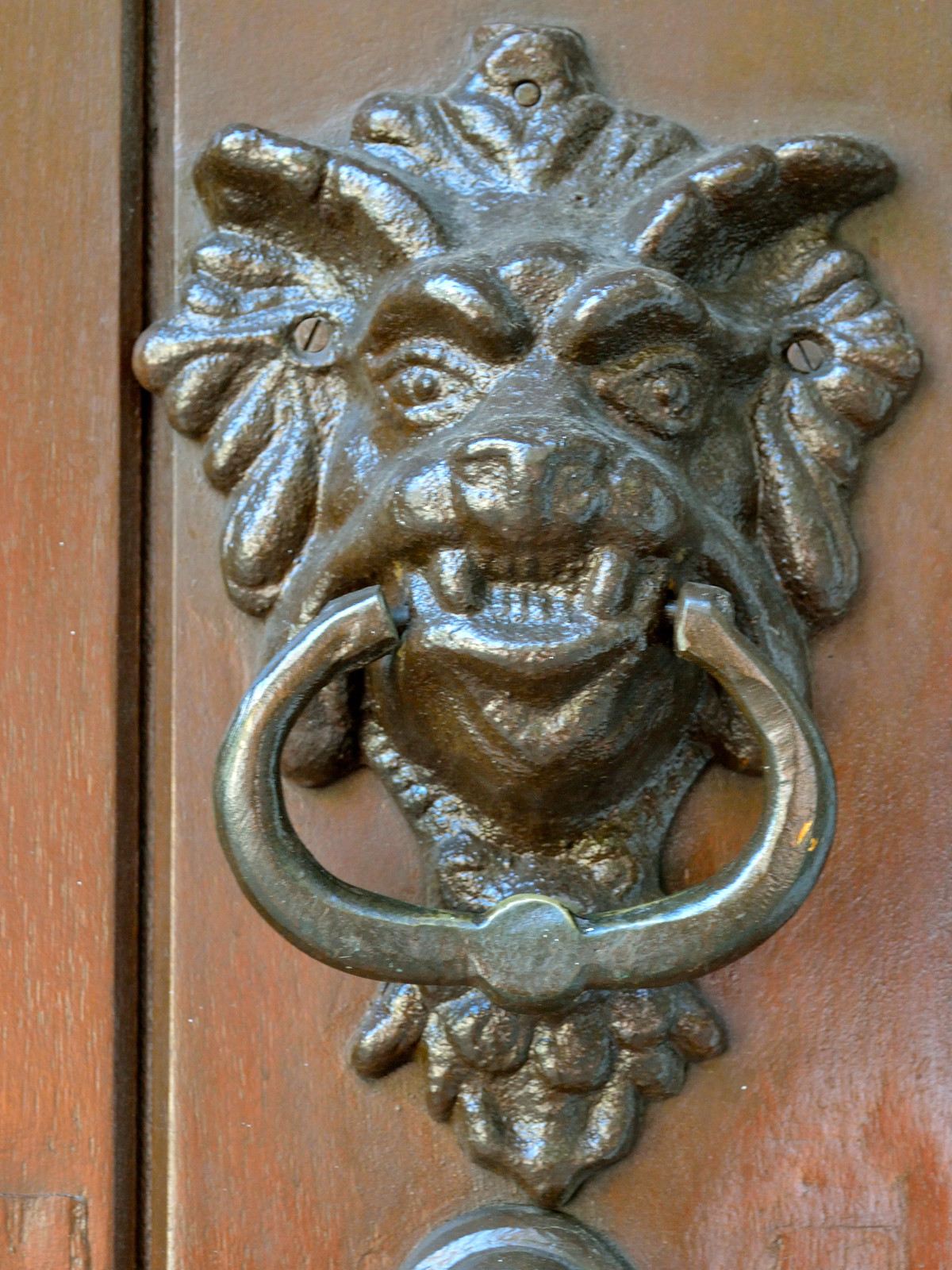 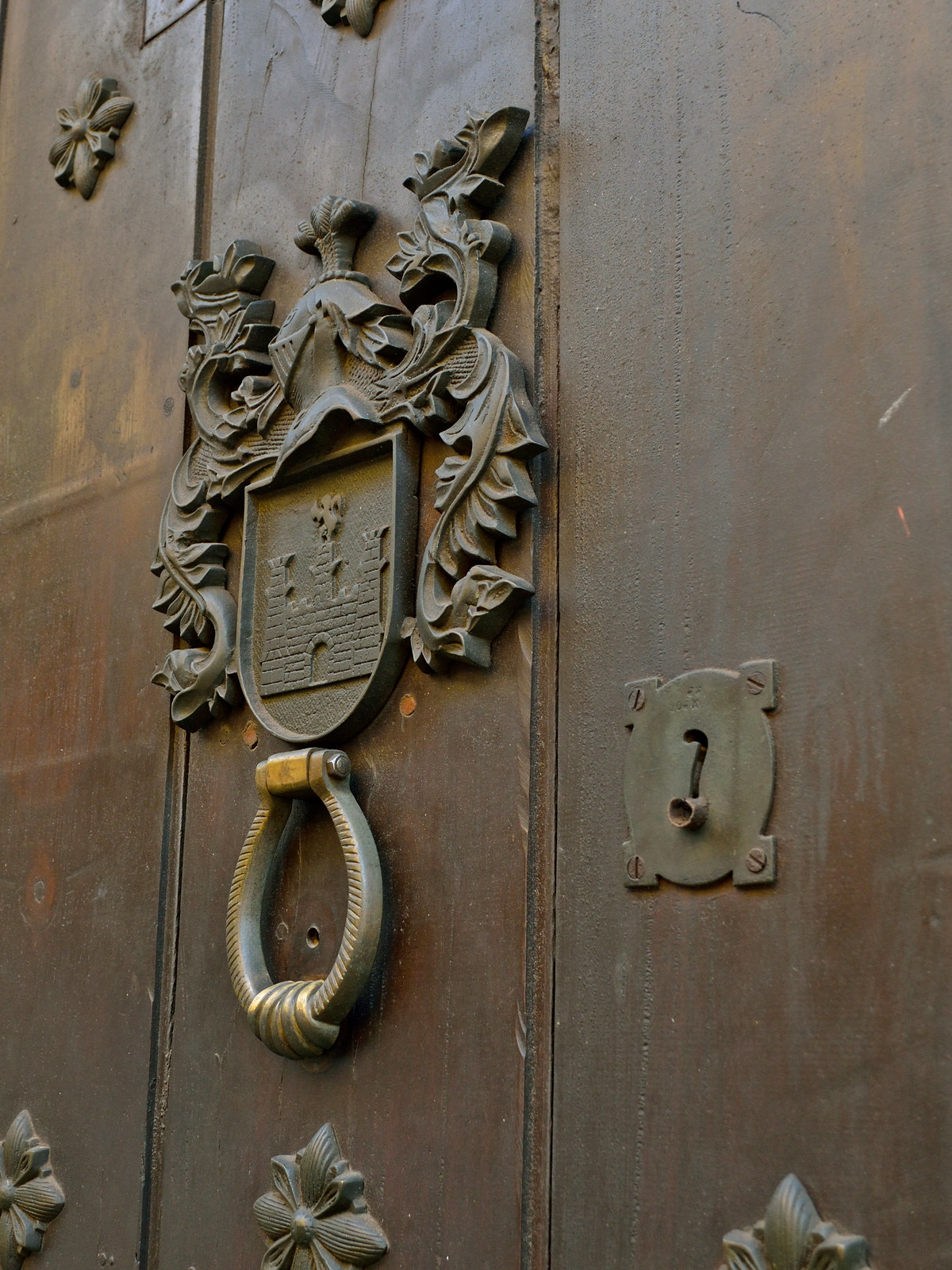 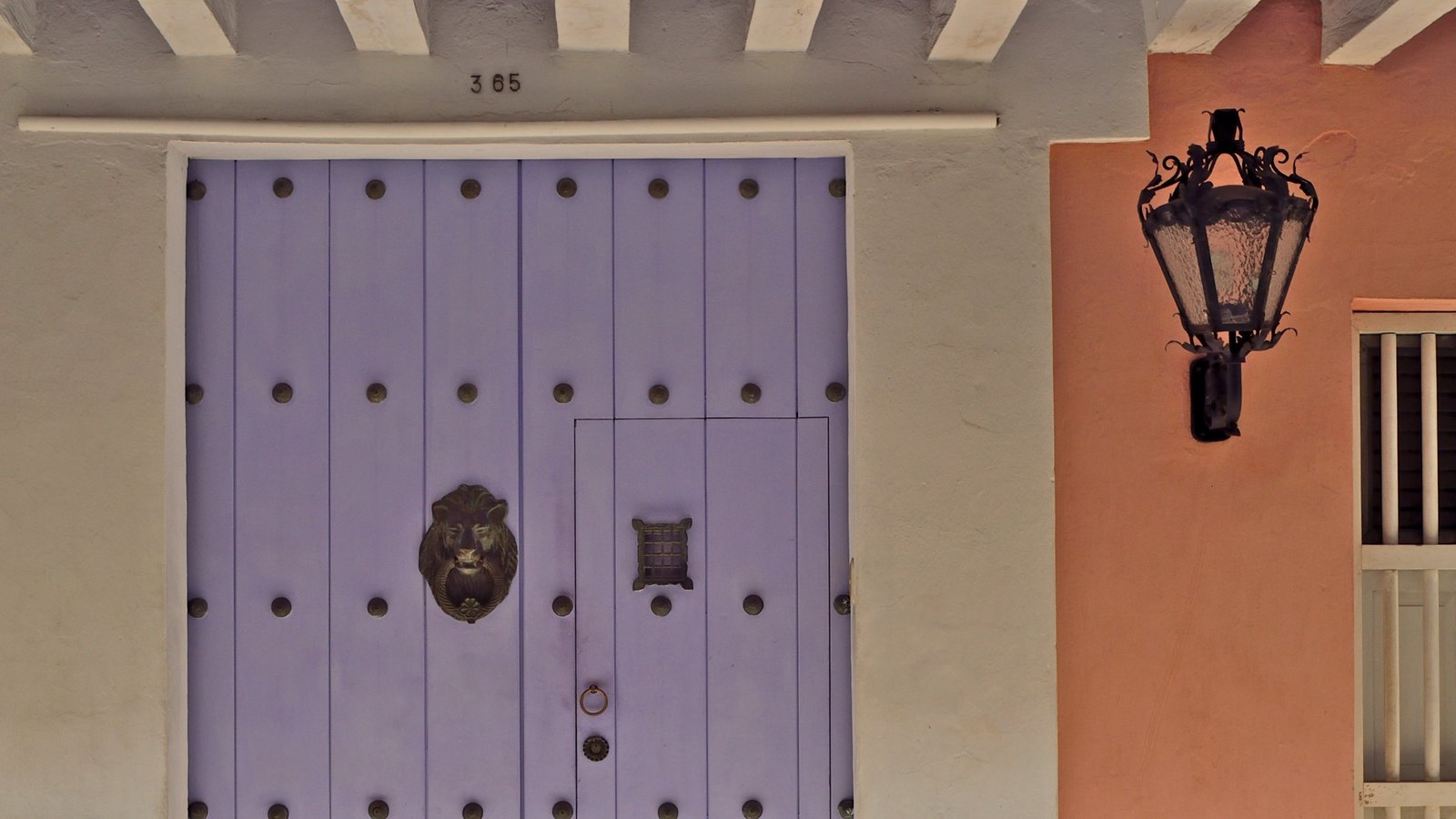 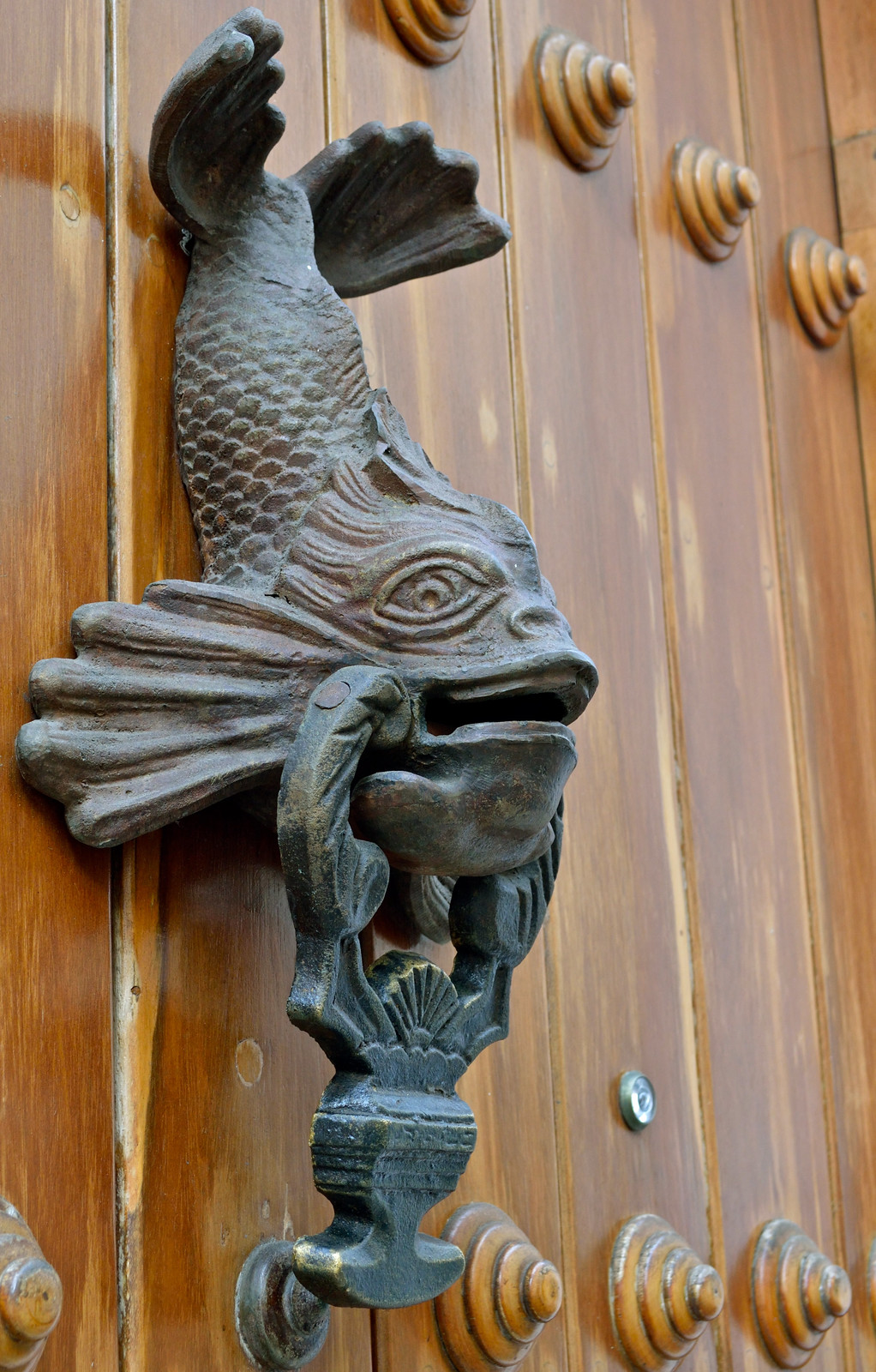 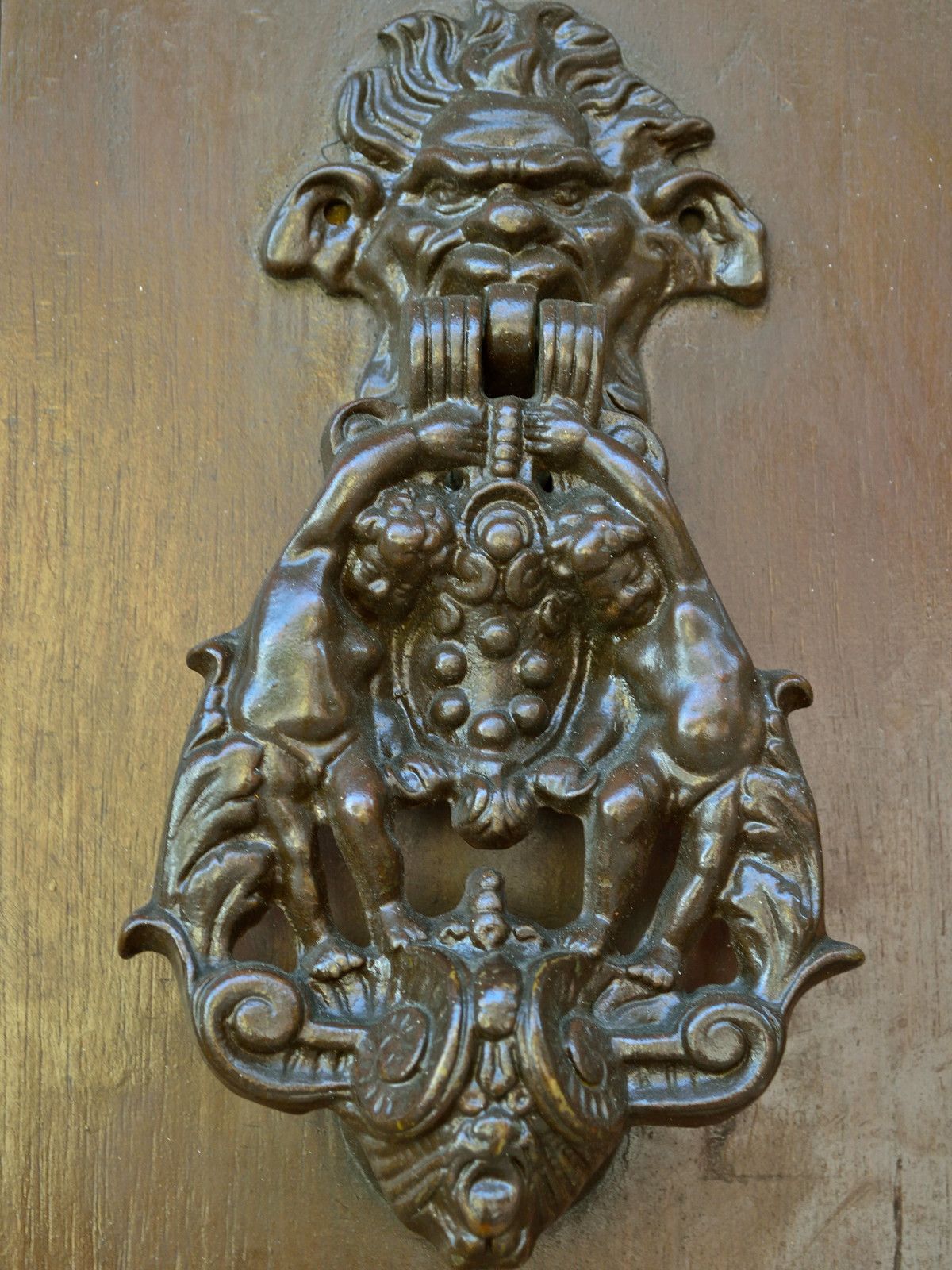