We are sitting a really nice house for our friends this month. It’s a nice change from the boat…electricity, running water, modern kitchen, all appliances, spotless and sparkling everything, two pretty cats…not to mention staying here cuts my morning commute by an hour and a half!

But what’s an artist to do in a sleek modern household on her day off, when both lunch and dinner have been made on the touch-operated glass stove top, the dishes are in the dishwasher, the laundry’s in the washing machine (that plays tunes like a calliope), the floors are gleaming, the carpet’s vacuumed, the spa’s been chlorinated, the plants watered, the cats fed…and you’re one of those people that don’t watch television? 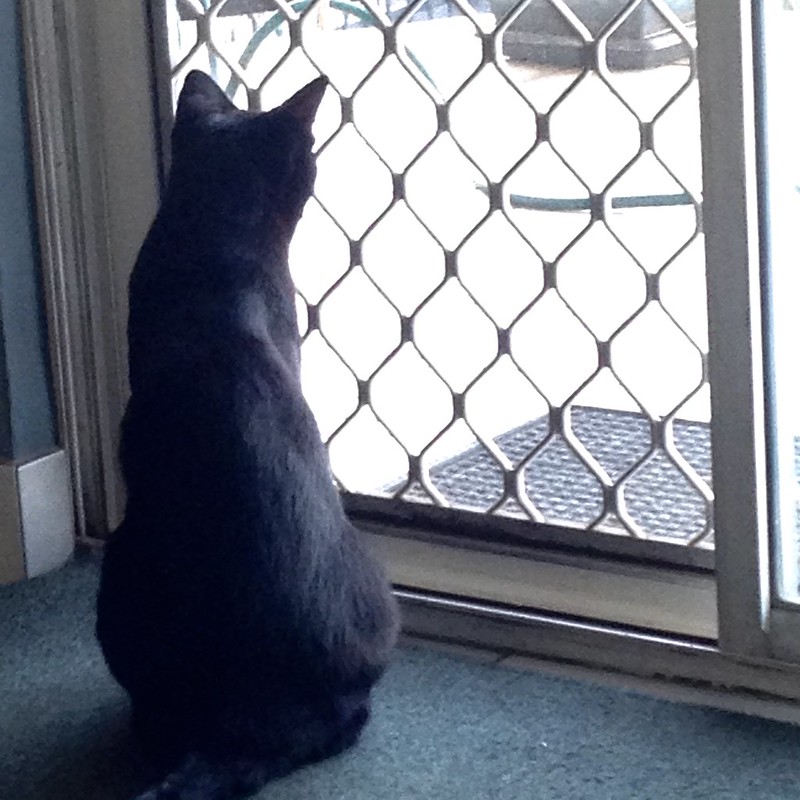 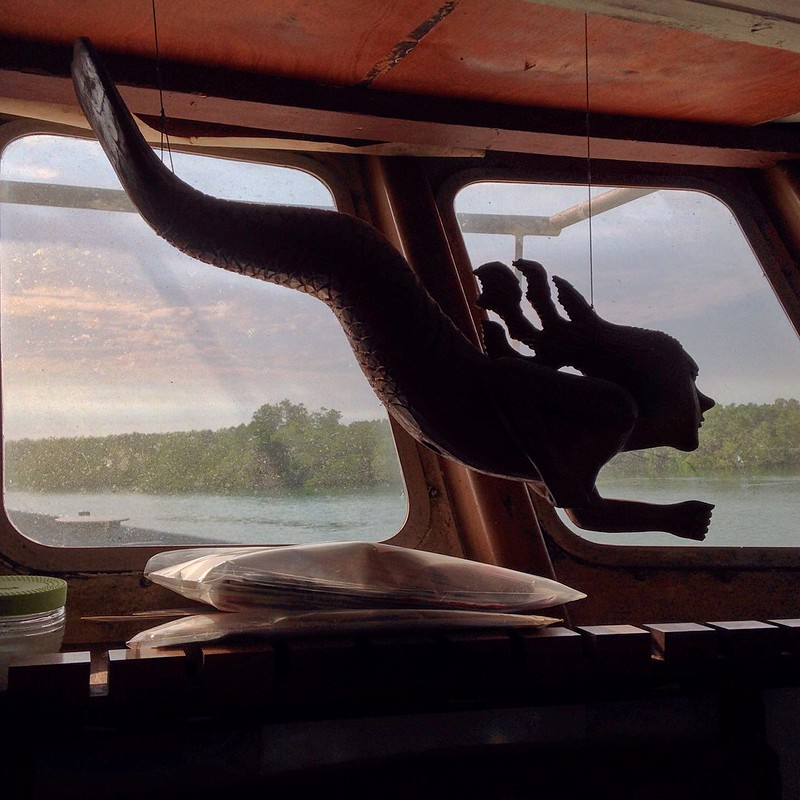 We locked the house and went back to our houseboat up the creek for the day…to drink rainwater, battle sandflies, fry eggs on a camping stove, boil coffee in a blackened pot, and make a creative mess. 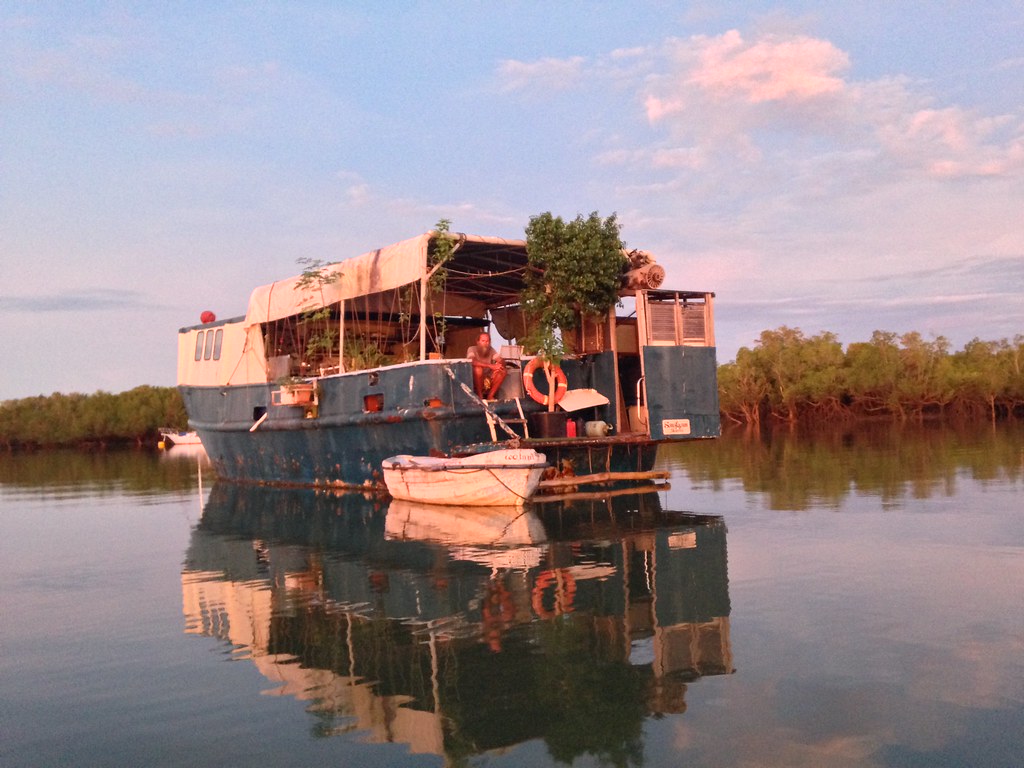 On the boat, books, art materials, and tools line every shelf, fill every drawer and storage box. 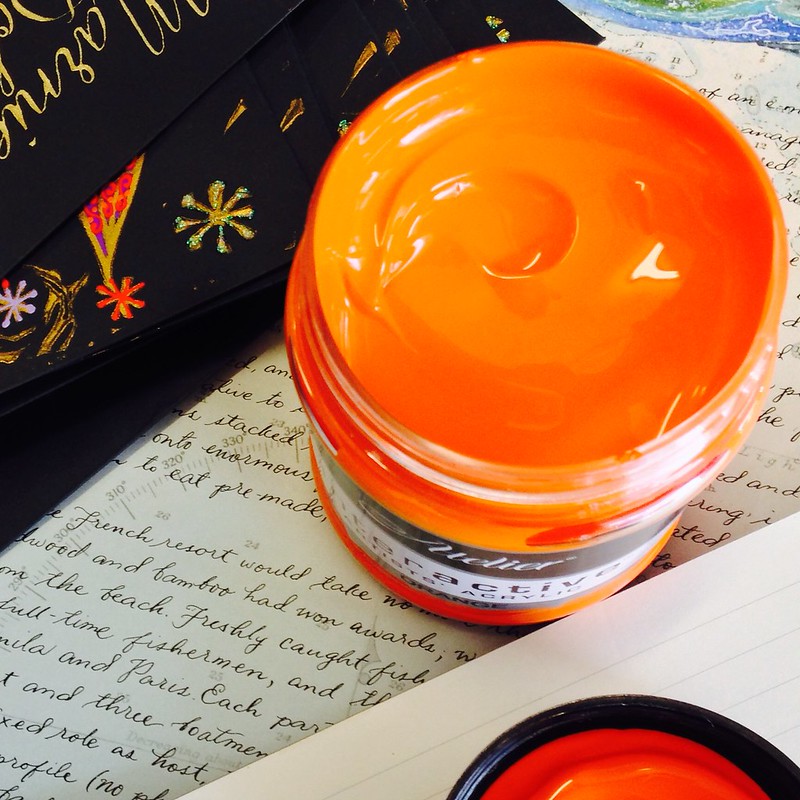 I’m allowed to get paint on the tables, spray paint things on the floor, bang nails into the wood, strew paper and canvases across the bed, tape art to the walls, and play loud music. The place is a disaster area.

I’m surrounded by things that my friends have made. 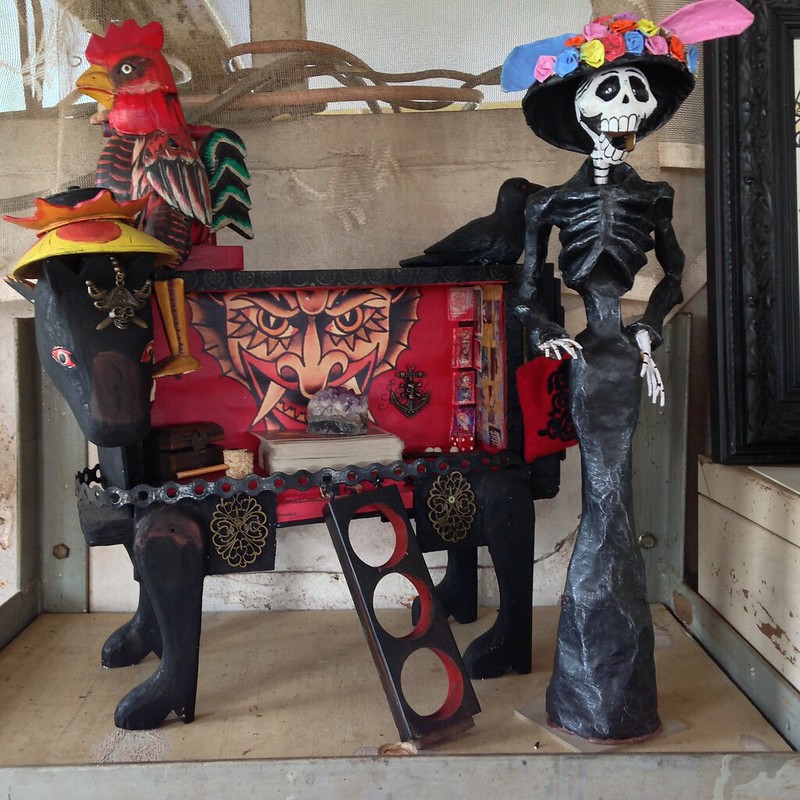 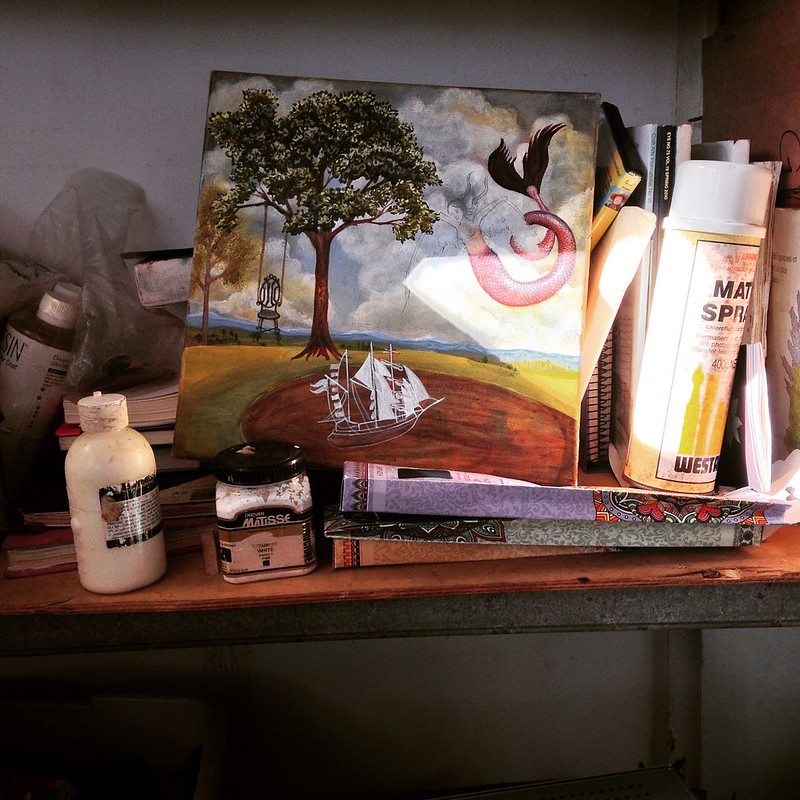 …the sort of stuff that sparks ideas, makes you hungry to work with your hands, and sets the imagination off and running. 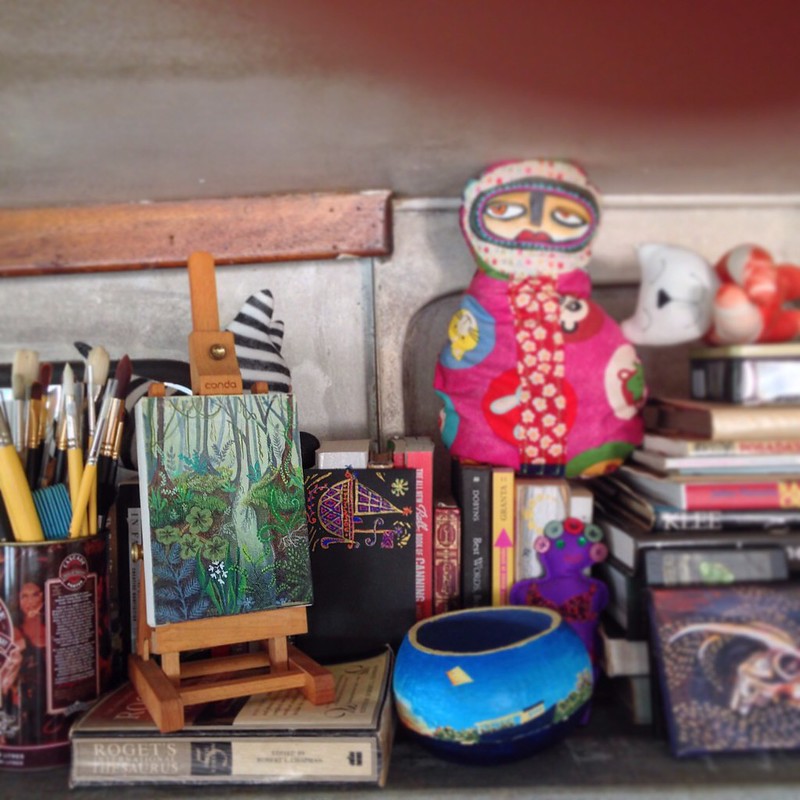 We left Sonofagun, happy and our creative appetites satisfied, at sunset. Back at the unit, the cats were eager to be let in; hot showers, cold beer, and a fiery vindaloo were waiting; also, the first truly crisp, cold Dry Season night had moved into Darwin.

Sigh no more, ladies, sigh no more.
Men were deceivers ever,
One foot in sea, and one on shore,
To one thing constant never.
Then sigh not so, but let them go,
And be you blithe and bonny,
Converting all your sounds of woe
Into hey nonny, nonny.

It’s the best of both worlds, really. 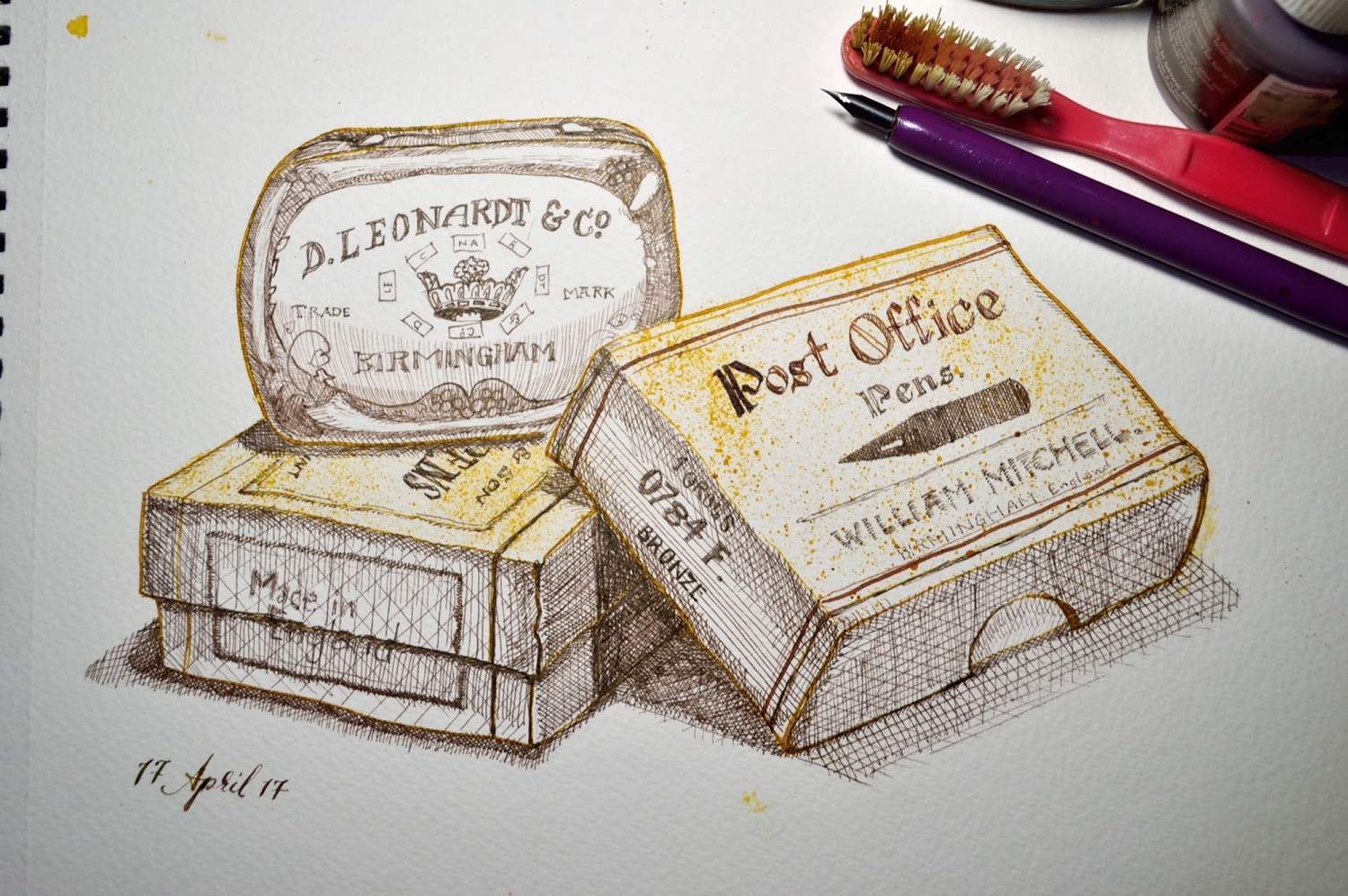 An exercise in monochrome sketching (except that I added amber ink splatters, at the end) and cross-hatching. One of my favourite artists, as far as drawing with ink is concerned, is Ronald Searle. He drew with a dip pen—wonderful variation of thick and thin lines—and used splatters in his drawings, a lot; so I did the same here: a couple of nibs, and sepia ink. Splatters using amber ink and a toothbrush.

This was my week’s homework for Sketchbook Skool: Exploring…which I scraped the bottom of my bank account  to join because this is the last time the class “Exploring” is going to run, and urban sketcher Felix Scheinberger—one of my idols—will be teaching. But all the teachers in Exploring are excellent, and I am looking forward to doing something different each week, with each one.

I am trying to rekindle some kind of daily drawing habit, too, and paying for a class is a good way to make sure you do the drawing assignments!

This week’s class was given by Danny Gregory, also a very cool artist, and I enjoyed his demos of how to draw an object using only contour lines and different kinds of hatching marks to give it dimension and texture. His video, “Breakfast,” doesn’t just make me hungry, it really makes me want to be the sort of person who does a drawing in her sketchbook, first thing in the morning, every morning. Right after the first pee, and before having coffee and a fag (and that’s my breakfast…no toasty onion bagels *sigh*) 😉 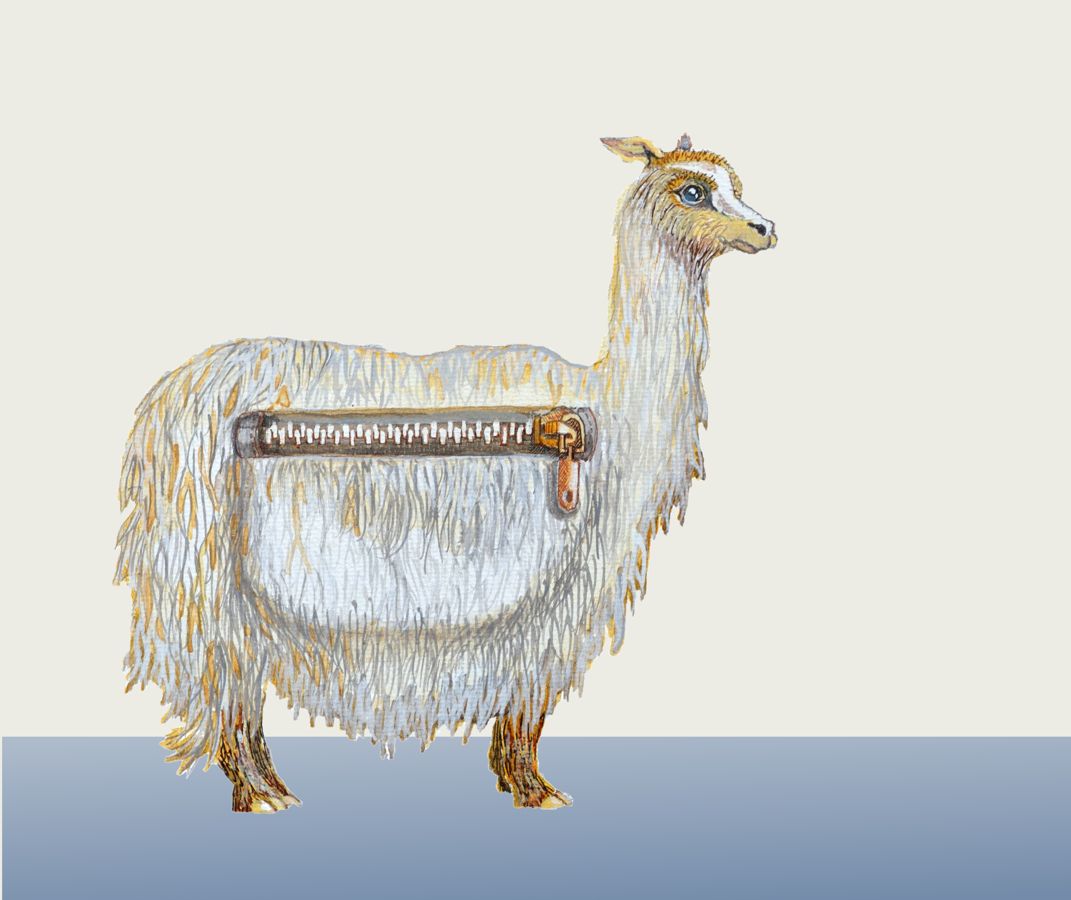 Another of my critters from the Dream Menagerie exhibition of 2014…the Pack Alpaca, with a zippered pocket to carry your stuff as you hike through the Andes of southern Peru…

Again, available in the Society6 shop, as art prints. canvas prints, bag, throw pillow, and clock. Hah. I hate selling my own stuff, I feel so pushy!

Then again, I have to be honest and admit that I like this one so much, I may order a bag for myself! It’s weird when you find yourself lusting after your own design and ordering it from someone else…with a little bit of stitching, I may even be able to put a real pocket where that zipper is, that would be really fun!

The original sold last year, so unless I buy or print this design, I’ll never ee my little llama again!

I’ll be adding the animals from last year’s Dream Menagerie to my Society6 shop, too.

Here’s the first one, Panzer Wombat…as though this little living tank of a marsupial needed to get any tougher! Wombats are like cannonballs with eyes and a furry nose. With the added protection of a Galapagos tortoise’s shell, he’s invincible! A superhero, nay, a god, among wombats…

Available as an art print, framed or un~, print on stretched canvas, a mug, a clock, a throw pillow, and a tote bag (I followed the file instructions, but the smaller tote bags chopped off his nose! AARGGH! Pictured is the 18″ bag, where he gets to keep his nose. I will fix this, in a day or two, I promise.)

Oh, yeah, I forgot, my SOCIETY6 SHOP is HERE. Hee. 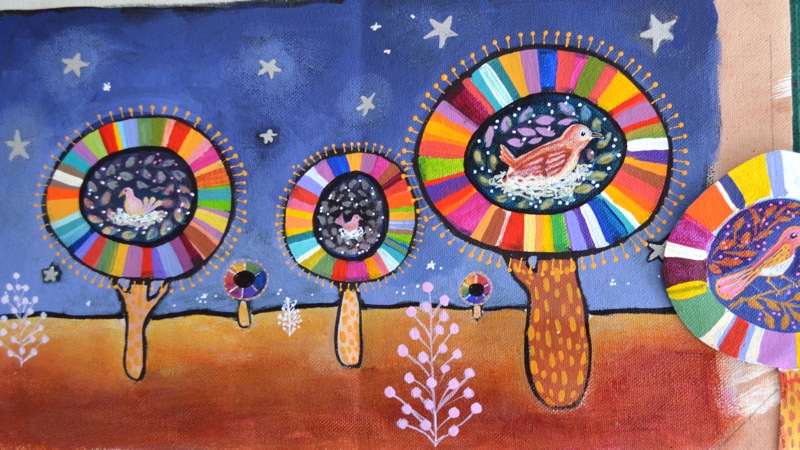 I made a rather happy painting for a journal today…did this in the morning, and in the hours after lunch, before I went to visit a neighbour on her boat. I’m glad I got it all finished before I went, I don’t think I could paint something so happy now.

I went to have tea this afternoon on Cathy’s boat, just next to ours. Was just trying to be a bit more sociable, and spend a little time with all the folks who have been so nice to me, before I go. While there, I brought up the subject of Dude coming to stay with her, and she told me she had rather hoped I was going to bring him over when I came for tea, and had been very excited. I felt rather abashed…she has been waiting a long time now for Dude…I have been putting it off, first telling her to wait till August, then till September. Now September’s at an end, and it suddenly seemed very selfish of me to keep her hanging on for another month or two. I guess I kept hoping for ‘the right moment’ to announce itself…for when I finally felt ‘ready’ to give Dude up. I realised, sitting with her, that I will never be ready. Now is as good a time as any. So I left her boat an hour or two later, promising to come right back with the cat.

I took my time preparing a crate for him to travel in…weaving two ropes in and out of the holes so they wouldn’t slip, and preparing the loops on the ends so that I could quickly tie the lid onto the crate once the cat was inside.

I picked him up, and started to sob, feeling his silky, soft fur and plump warm body for the last time. The silly sausage was purring…he is such a docile and gentle cat. He didn’t fight when I put him in the crate, and didn’t go wild once he was sealed in. I tied the crate up, and he sat quietly inside, wondering what the game was. He didn’t start to complain until he was in the dinghy. Every plaintive meow brought another flood of tears. I rowed him over to Cathy’s boat, because I didn’t want to traumatise him with the sound of the outboard.

We got the crate aboard, and I handed a bag over with his plate, his water bowl, his biscuits, and his brush, snuffling the whole time. She waited until I had rowed away before she opened the crate up.

I had to go back a second time, with his cat litter. Dude got very agitated, and Cathy and I swapped things—she handed me back the crate and ropes, I handed her the litter—via her dinghy, so that I wouldn’t come too close to the sailboat. As I rowed away a second time, he seemed to be looking for a way to jump over the guard rails and into the water. Cathy distracted him, and then he just sat on the back deck, watching me row away. Since I got back on board, i have tried not to look out the window at her boat…I don’t want to see him looking across the water. I think I’ll sob all night, tonight.

A part of me feels breathless…I surprised myself by just up and doing what had to be done, and it’s only starting to sink in now that Dude is not with me. I’ll miss his purring by my shoulder in bed, the adorable way he likes to sleep with his head high up on a pillow like a person, the considerate way he has learned to ‘massage’ and claw at the bedclothes just next to me, and not into my arm or head, and the sight of him stretched lazily out on the carpet at my feet.

I’ve been reduced to a leaky, snuffling mess. Cats, of course, are not like humans, they are practical and resilient creatures that live every moment fully in the present. He is not suffering the way I am suffering. He’ll be a bit put out, and he’ll look for me and the boat he used to live on, for some time. But on the whole he will settle into his new life with his new human, I think, much faster than I will get used to living without him.

I have got another two months of living here to get through, and my biggest fear is that Dude will one day try to swim across if he sees me on board. I hope, hope, hope he stays at his new home, and that the sight of me coming or going doesn’t make things difficult for Cathy.

This is just one of several tearful separations coming up…October is going to be a weepy, emotional, difficult month. Lots of advice about following your dreams will mention the pulling up of metaphorical anchors…it sounds romantic, but that doesn’t mean it’s easy to do. At least, not when the other end of every anchor chain is fastened firmly to the center of your heart. 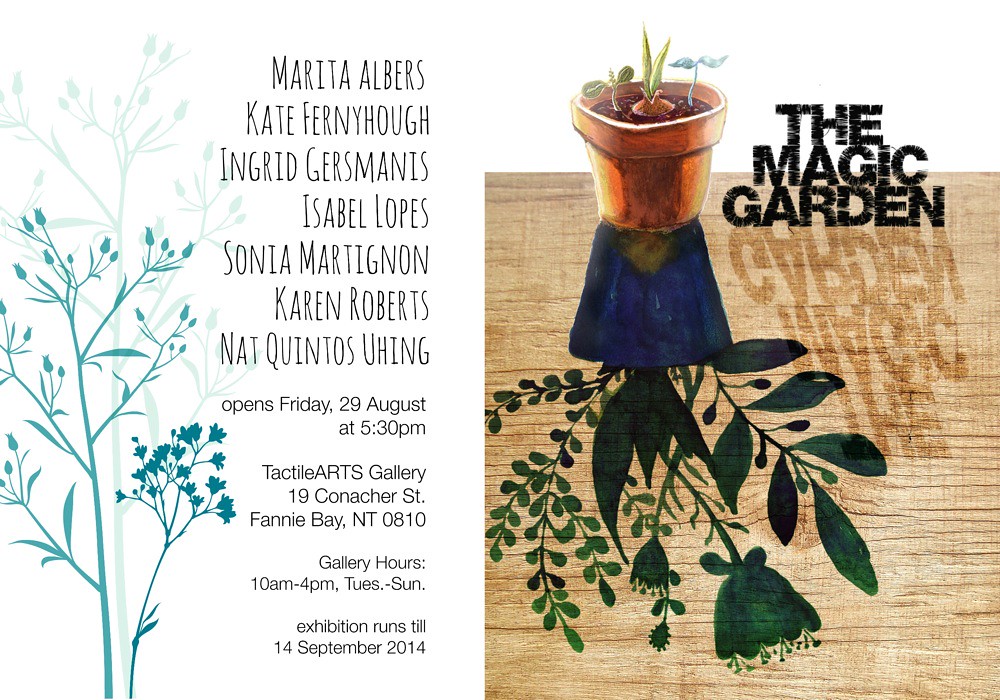 We’d like to invite you to our garden-themed group exhibition, The Magic Garden. Hope to see you there!