A letter about the sudden compulsion to buy a bus ticket to New York—”What a lark! What a plunge!”— when I (probably) should have been visiting all my relatives in Virginia, listening to the clan gossip, and diplomatically dodging any pointed questions about my family…

This letter’s print run was the same as last month’s. That’s okay, since I can’t add anyone on at this point, I had just enough printed to send to current patrons. As I warm to the idea of doing this full time, and to using Patreon as my homebase, my ideas for future letters are getting bolder, more heavily illustrated, and more experimental in format. http://www.Patreon.com/scarletletterbox

I can’t do back issues, because of Patreon’s system. Print quantities are for current patrons, you must be signed up before the 30th of the month, and the mail goes out on the 5th of the following month. It waits for nobody, comes back for nobody, repeats for nobody…this is not a drill, it’s a rocket to Mars, baby!

If you missed this one and don’t want to miss the next issue, please consider subscribing!

For the price of a coffee break, you get a beautiful letter in the mail, illustrated and (I hope! I try!) well-written, with calligraphy and postage stamps and wax seals and little gifts included, each month. And you don’t have to write back. Sign up for as long as you like, unsubscribe at any time.

You can even ask me to send the letters to someone that you should probably be writing to, but just can’t seem to get around to doing it. It’s not the same as a personal letter that you wrote, but it can still be very exciting to receive a beautifully addressed envelope, knowing that each month’s letter is a present from you.

All right, that’s enough, I know you know the routine. This little piggy has hustled enough for tonight! 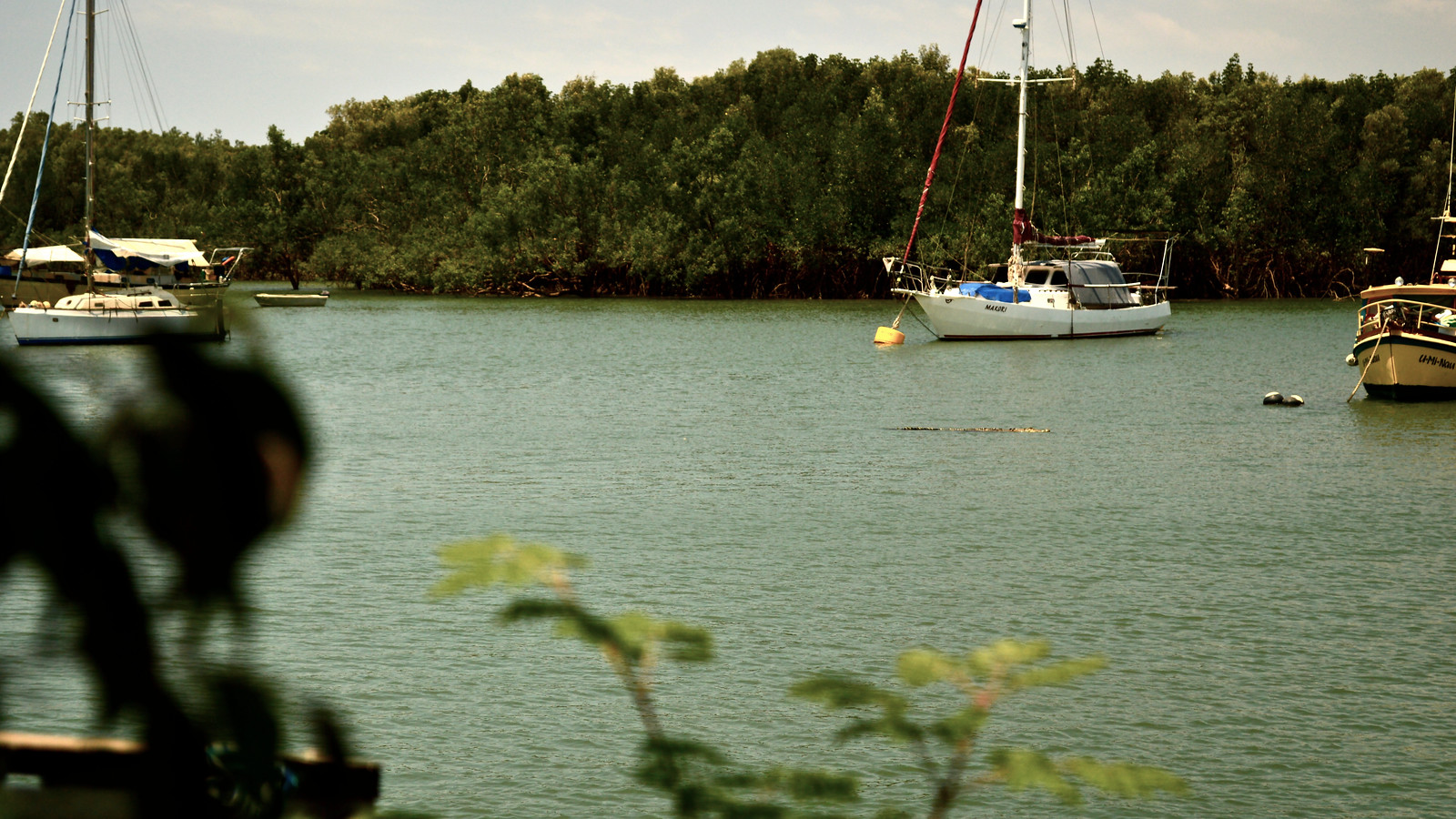 Heavy clouds but no rain…the Build Up is here, and we’re all stewing in our own sweat like plump pomfrets.

Living on a houseboat, it’s sometimes really tempting to go for a quick swim…cool off in the water…but sightings like this one curb that longing. Between 10-12 feet long, or thereabouts; big enough to do some serious damage already. Curious about the surroundings, this lizard clearly has not learned to be wary, yet, so it will be in a trap soon enough. My personal first sighting of the season (though by no means the first in the creek! It’s the ones you can’t see that are the real worry…)

The leaves in the foreground are my own pot plants…so yes, it seemed to be stalking me, actually. 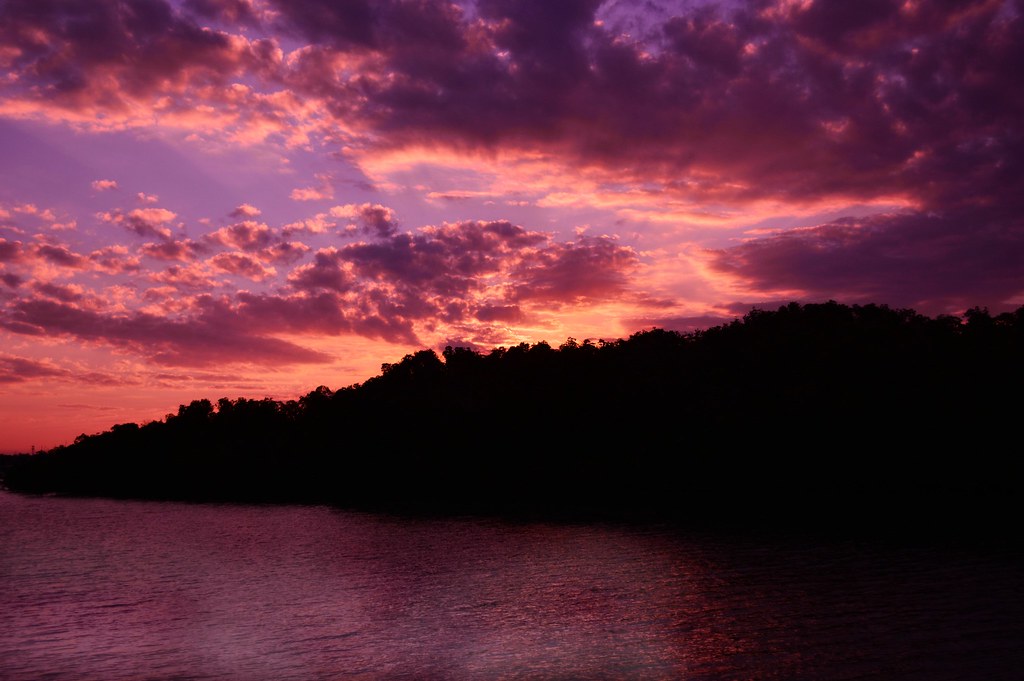 Found this old-school filter (real one, that you attach to a camera lens) in a drawer of camera gear I was cleaning out.

It’s made to counter the greenish tinge of fluorescent lighting, but I found it gives the sunset an intense amethyst glow, and can turn water into wine. Like Jesus. 😉 A miracle.

The cloudy dawn stopped to gaze at itself in the mirror-smooth surface of the creek this morning. I snapped it to see if I could capture those reflections.

Moments of grace can be so fleeting …I checked the photo quickly, but by the time I looked to the East again, the vision was gone. A dirty pewter creek and the sky bleaching into day.

One more day at work tomorrow, and then the short Sunday will bear the burden of all my creative frustration before I head back to work on Monday. I don’t know how some people work like this, six days a week, for years! 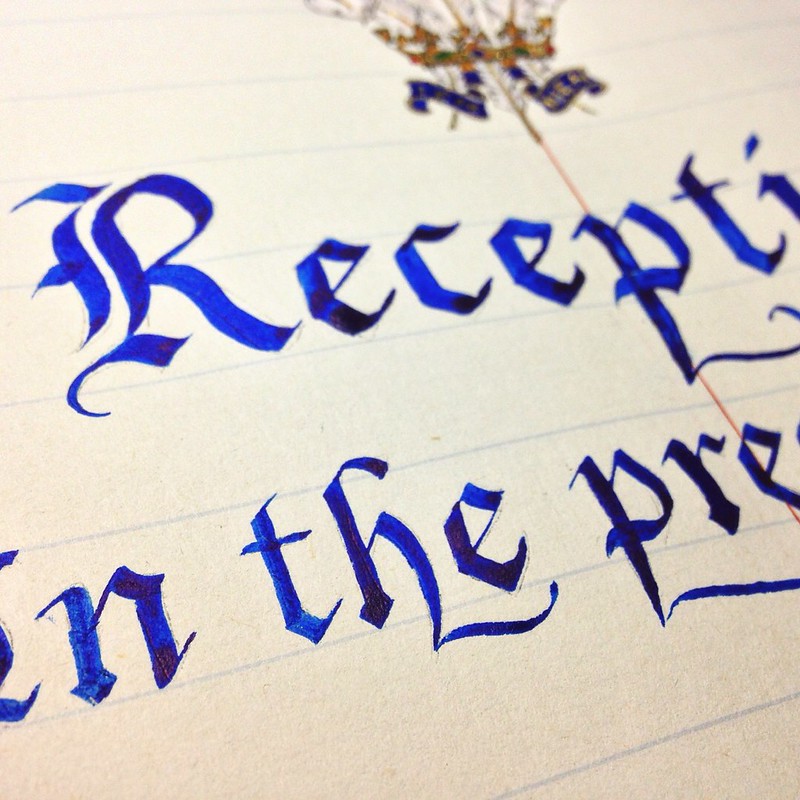 So here’s a little story that I forgot to say anything about, back in April when it happened…

The phone rang at work, one afternoon, and a lady asked me if we (Jackson’s Drawing Supplies, an art materials shop) knew anybody who would do some calligraphy in a hurry. It’s been a long time since any calligrapher left a business card with us, so I told her “Sorry, no active calligraphers that we know of…except maybe…”

I assumed it was for a wedding, and that she wanted someone to address the envelopes in a curly copperplate-style script. I can do that, surely, I’ve been writing envelopes all month…

“Well, I sort of do it…only…I don’t know whether my work is good enough…I’ve never done it for a client before, you see…”

“Please send me a sample of your calligraphy work today.”

What? Today? I took a photo of some amateurish sign I’d made for the shop’s calligraphy section (“Clearance Sale— Calligraphy Nibs”), added a nicer shot of outgoing Scarlet Letterbox envelopes I’d written in gold on black, and e-mailed them to her.

“We would love for you to do the job for us,” she wrote back the next day. And so they sent me the project specifications.

It turned out that I’d been speaking to a representative of Darwin’s Government House—a historical building in the city—and that the gig was a page in their huge visitor’s book, to commemorate a visit from Prince Charles in less than two weeks’ time.

The lettering wasn’t in copperplate at all…they wanted Gothic blackletter, or at least batarde. I would have to learn to write an entirely new lettering style. Nothing could stand more opposite to the swashy “cupcake shop” script I had been practicing. Also, they wanted an heraldic badge, the Prince of Wales’ feathers, at the top…in colours and gold. One page had been marked in the book…I would have just one shot at it, and there were less than 10 days to do it.

Holy ostrich feathers, Batman, what had I gotten myself into? When I told friends, via facebook, what I had been asked to do, most made very strange comments like “Congrats! They picked the best person for the job,” or “They should be honored that you have consented to do the art work.”

I reeled in confusion…who were these glib and cheering people that seemed to know me so very little, after all these years? Only Helen grasped the utter weirdness of a job like this winding up in the reluctant, sweaty palms of a royalty–oblivious troglodyte like me, and she alone said something I could actually relate to: 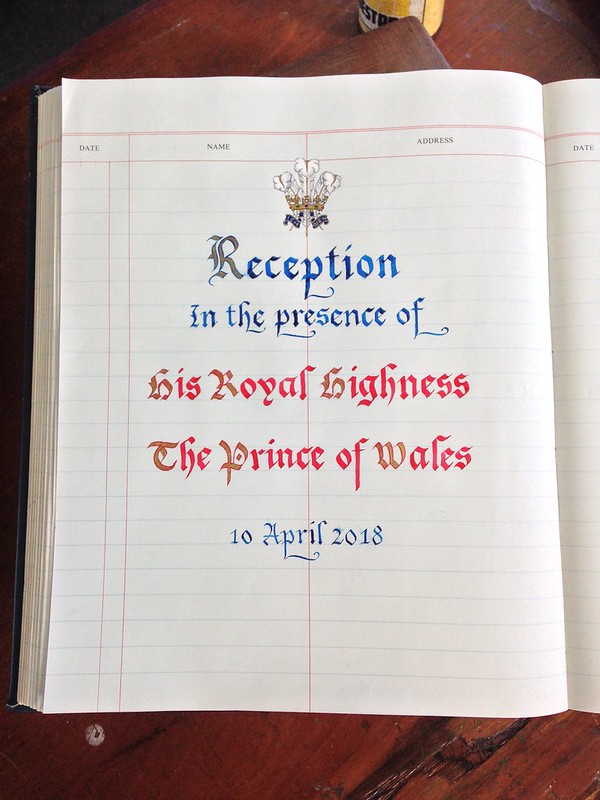 The story ends happily. I managed the heraldic badge admirably (I think so, anyway), and although the letters are a bit ho-hum—no virtuoso gothic writer, me—they are readable, and clean, and centered.

I only spent 19 hours agonising over this simple page—most calligraphers would have dashed it off between breakfast and tea time—but it was delivered on schedule, in one piece, and Bonny Prince Charlie signed the recto page…probably without glancing at my verso page, because the poor man only has to appear at dreary official engagements—ribbon cutting, guestbook signing, niceties-mumbling, tea slurping and biscuit nibbling—about 12 times a week (he is described as “the hardest-working member of the royal family”) and he’s actually a deeply intelligent and compassionate person with serious philanthropic, philosophical and environmental interests, so that it really seems he had the tougher gig between the two of us, and who can blame him for being blind to visitor’s books? 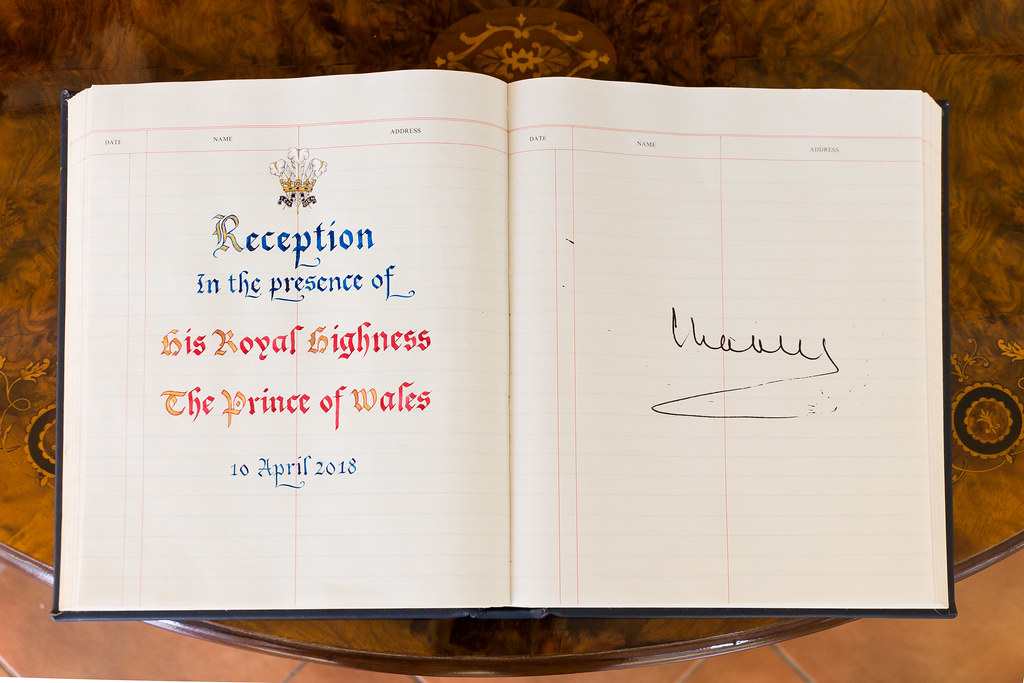 The ladies of Government House very kindly sent me photos of the signed guest book, afterwards. This is the closest I will ever be to royalty…but a hand’s breadth between my writing and his, is pretty close.

I was more deeply honoured by this incongruous juxtaposition of our scribbles than I let on because, while I don’t give a rat’s ass about the titles one inherits at birth from one’s forebears, I respect the man: the way he has chosen to spend his time on earth, the efforts he has made to understand the issues, to help others, perform his duties, and still be himself. He cops a lot of flak for some of these things, but any person who believes passionately in anything, and does something about his convictions, will have critics, no? 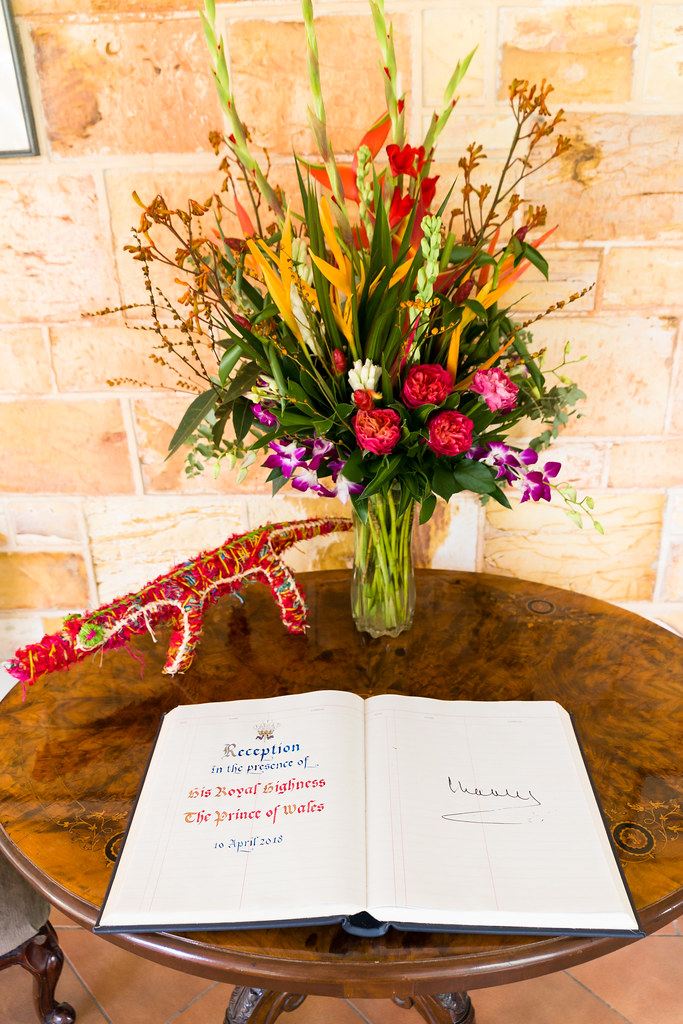 Except that I am still waiting to be paid for this job that I did in early April; but I rang my clients yesterday and they seemed surprised to hear that I haven’t received my fees, so maybe something will happen. 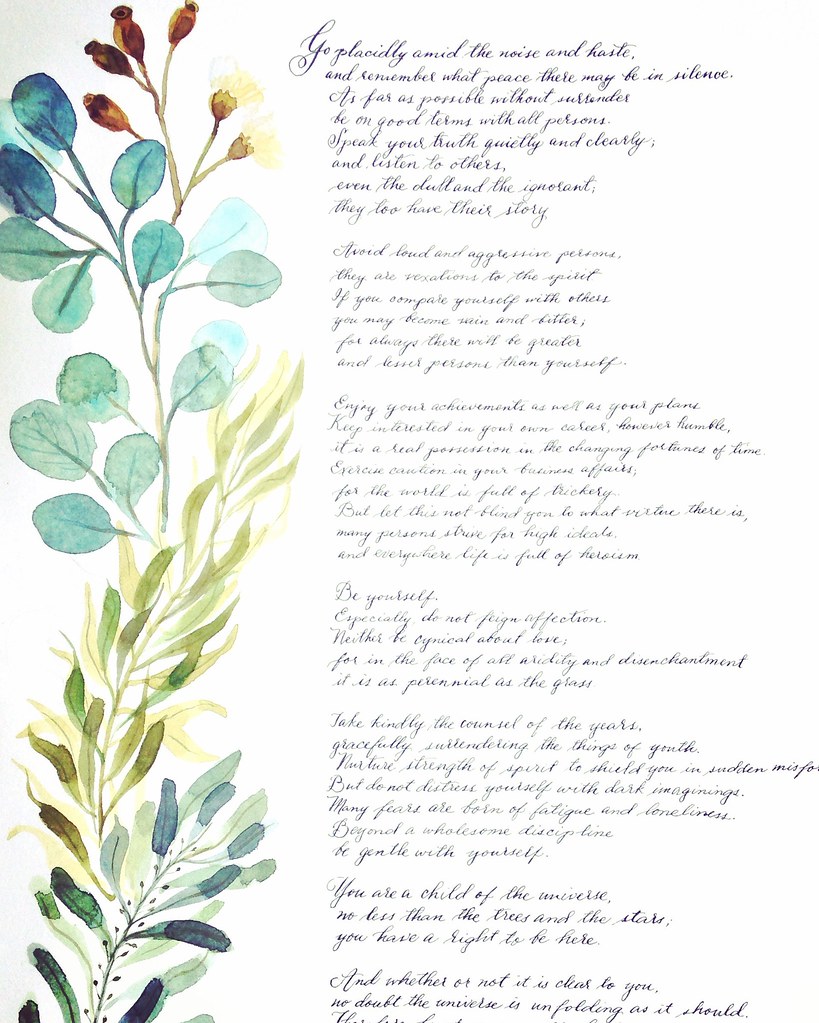 Commissioned by a friend.
Don’t look too closely at the writing, it’s all over the place!
I loved doing the watercolour eucalyptus leaves, though.

Max Ehrmann’s Desiderata is still a beautiful piece of writing. It’s funny that almost everyone I know (myself included)remembers reading it behind the bathroom door…what a strange place for such a lofty piece of writing!

Still, when you consider that the bathroom is often the only place in the house where we can be alone and have time to reflect on philosophy, perhaps this is where something like Desiderata can make a real impression. Who would stop to read it, otherwise? It’s worth letting its message sink in…still relevant, perhaps more so, nowadays, than when it was written in 1927…

“Go placidly amid the noise and the haste, and remember what peace there may be in silence. As far as possible, without surrender, be on good terms with all persons.Speak your truth quietly and clearly; and listen to others, even to the dull and the ignorant; they too have their story.

Avoid loud and aggressive persons; they are vexatious to the spirit. If you compare yourself with others, you may become vain or bitter, for always there will be greater and lesser persons than yourself.

Enjoy your achievements as well as your plans. Keep interested in your own career, however humble; it is a real possession in the changing fortunes of time.

Exercise caution in your business affairs, for the world is full of trickery. But let this not blind you to what virtue there is; many persons strive for high ideals, and everywhere life is full of heroism.

Be yourself. Especially, do not feign affection. Neither be cynical about love; for in the face of all aridity and disenchantment it is as perennial as the grass.

Take kindly the counsel of the years, gracefully surrendering the things of youth.

Nurture strength of spirit to shield you in sudden misfortune. But do not distress yourself with dark imaginings. Many fears are born of fatigue and loneliness.

Beyond a wholesome discipline, be gentle with yourself. You are a child of the universe no less than the trees and the stars; you have a right to be here.

And whether or not it is clear to you, no doubt the universe is unfolding as it should. Therefore be at peace with God, whatever you conceive Him to be. And whatever your labors and aspirations, in the noisy confusion of life, keep peace in your soul. With all its sham, drudgery and broken dreams, it is still a beautiful world. Be cheerful. Strive to be happy.”