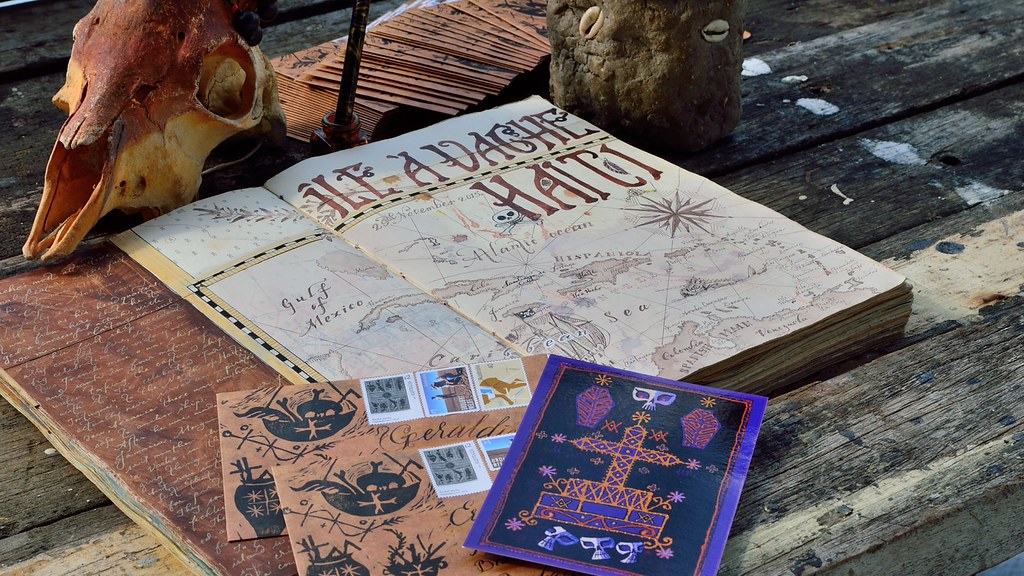 Outgoing mail, in the company of my journal pages from Haiti, the Baron Samedi (His Purple Majesty), a goat’s skull I found on a city sidewalk in Darwin (waaaay more bizarre than if I’d found it in South America somewhere…) and our homemade Elegguá (in some ways, the star of my letter).

The letter “Cemetery Story” will no longer be available by end of day (ACST, UTC +9:30) on October 30, so if you enjoy slightly morbid stories about visits to cemeteries, or are famiiar with the Lucumí, Mayombe, or vodoun religions that traveled with the diaspora from Africa to the Americas via the African Trans-Atlantic slave trade, then today is your last chance to sign up to Patreon and receive this issue of The Scarlet Letterbox.

The letter is a little longer than usual, but I’m reluctant to amputate any more of it than I already have, so this letter will have an extra page of writing, so I can finish telling the story! The envelope has been printed by hand, using a homemade rubber stamp, in black and gold inks.  I’ve also slipped a postcard of my interpretation of Baron Samedi’s vevé, a design particular to Haitian vodoun, into the envelope.

On the Patreon site, patrons will have access to my favourite poem on the subject of death…(it’s not what you think—it’s a humorous, wonderful poem that totally celebrates the fact that life and death are yin and yang, each wrapped in the other’s embrace, both natural and desirable) as well as photos of some of the people, places, and things that I mention in my letter.

By the pricking of my thumbs,
something wicked this way comes.

I’m still waiting for my new phone (La la la…’nuff said…so boring) and so text and photos taken with my old DSLR are all I can offer on the Patreon site, for now. It’s coming, though…it’s coming…it’s very close…I can feel its presence…it may even be in Australia by now… 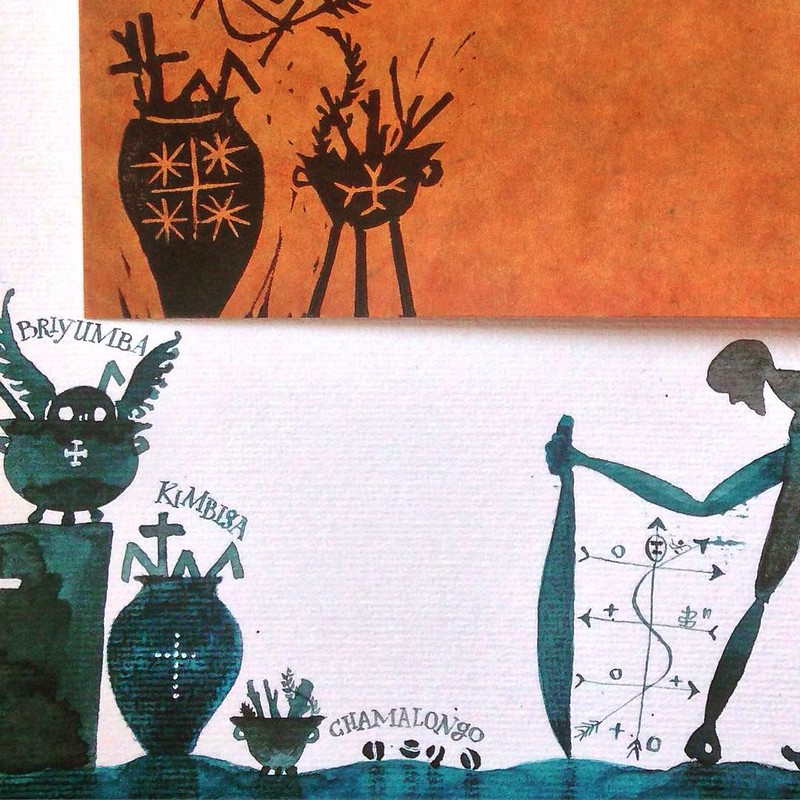 The thing with Patreon’s set-up is that I can’t charge individual patrons for individual letters. These days, when I publish a “paid post”, all of my patrons get charged at one time, for the same letter. It’s too confusing to charge everyone, but for different letters.

When November’s postal train pulls away from the station on the 1st, that’s it; you may sign up for Patreon any time in November, but you’ll be waiting for December’s letter car to pull up.

If you want a previous month’s letter, I can make that “back issue” available to you, over in my Etsy shop (provided I have copies left) but you can’t get it as part of your Patreon patronage, anymore, because the only time I’ll publish a “paid post” will be when the next letter is ready for mailing out. Besides, I’m now ordering the minimum quantity of printed copies, just to cover the current month’s number of subscribers…