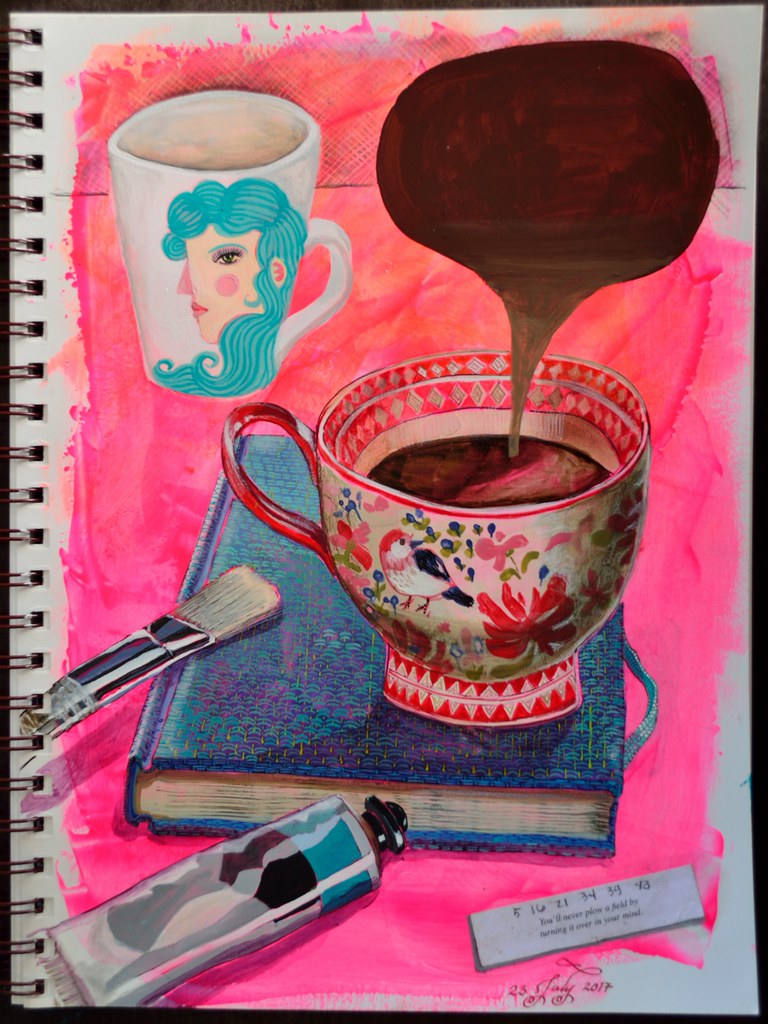 Bought a jar of fluorescent pink paint, months ago (prompted by a flash of inspiration that I can’t remember, now), and decided to see what it would do as a ground cover. I like the little bits that show through cracks or glow behind layers in the painting—in small amounts and under other, less-bright colours, the hot pink flickers interestingly—though I find the solid parts a bit too strong. Still, it was fun to work with. Not a colour I’ve ever used, so it was different.

I had fun with the woven pattern on the book cover…I don’t actually have a book covered in fabric like this, the original is an ordinary planner, beige,that I use to jot down deadlines, appointments and shopping lists.

The two cups look a bit strange together, especially since they are so different from each other, but I had simply sketched what was in front of me at the time, without thinking about composition or trying to make any sense.

Couldn’t decide, in the end, what the cup of coffee would say, so I left it blank with the idea of filling it in later. Before drawing anything else, I had stuck down a slip of paper from a fortune cookie—“You’ll never plow a field by turning it over in your mind.”—and more words would have been overkill, I think.

Looking at the dark brown speech bubble now, the coffee simply seems to be announcing itself (I drink my coffee strong, black, and unsweetened). I may leave it. It’s just a journal page: something I feel the need to do every few days (really, I’d like to do this daily, but never manage to keep it up) for myself. It fills an inner need to slow down and look intensely at something for a couple of hours. 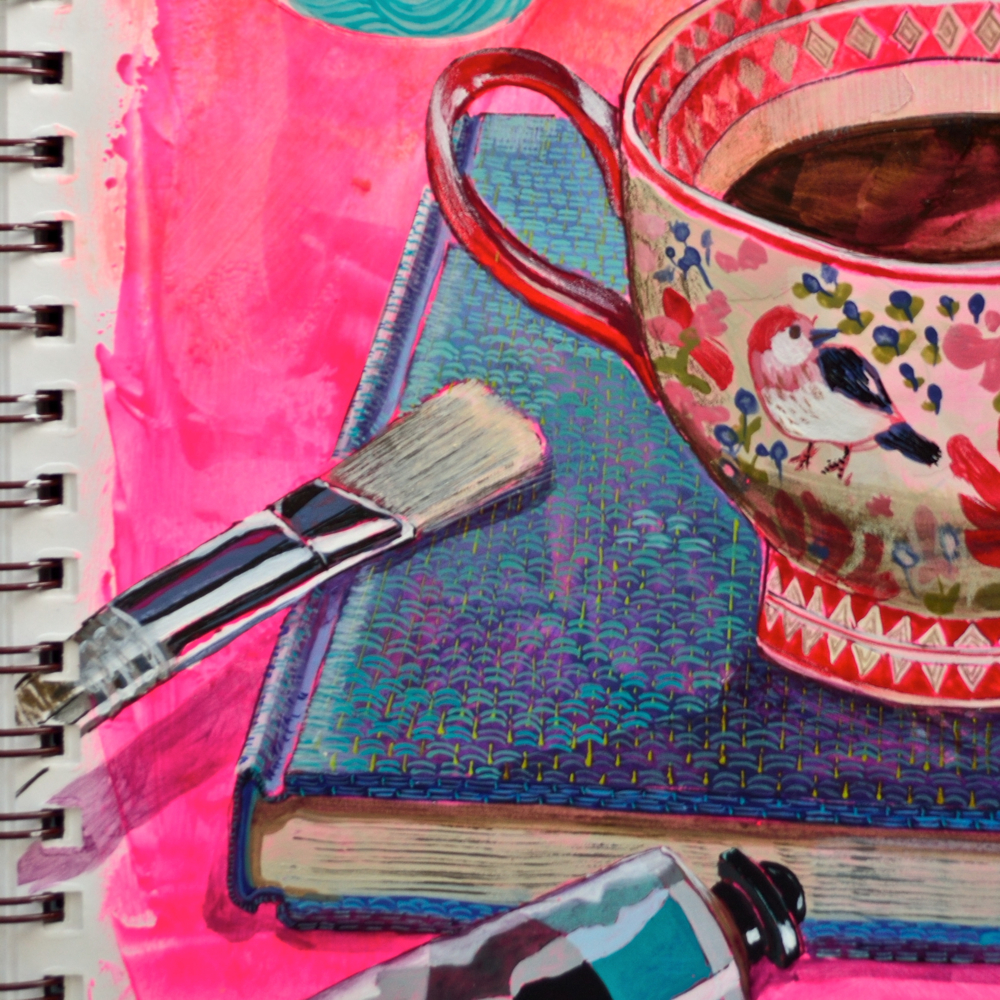 Music and words by Juan Andrés and Nicolás Ospina of Inténtalo Carito I’ve enjoyed their witty, smart lyrics immensely, and the sense of humor in their videos is endearing. So much that I’ve signed up as a dripfeed patron on their Patreon page 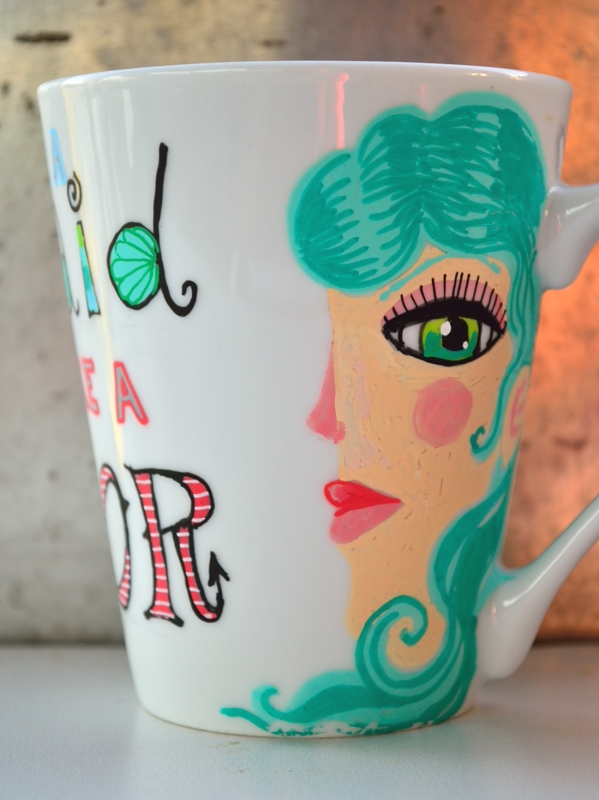 Had a quiet day at home, on the boat, yesterday. I took my stash of Posca pens out, thinking I would have a bit of a play in my art journal…but this plain white cup on a kitchen shelf caught my eye, and I wound up painting a mermaid and a sailor on it, instead.

I saw the quote online, on a mass-produced cup, and nearly bought it; but the design was rather poor—no images, only the words in a scribbled font, and they were unreadable amid the expanses of white space—that the whole thing looked skimpy and cheaply made.  I decided I would wait until I found a better one, then forgot all about it until yesterday. 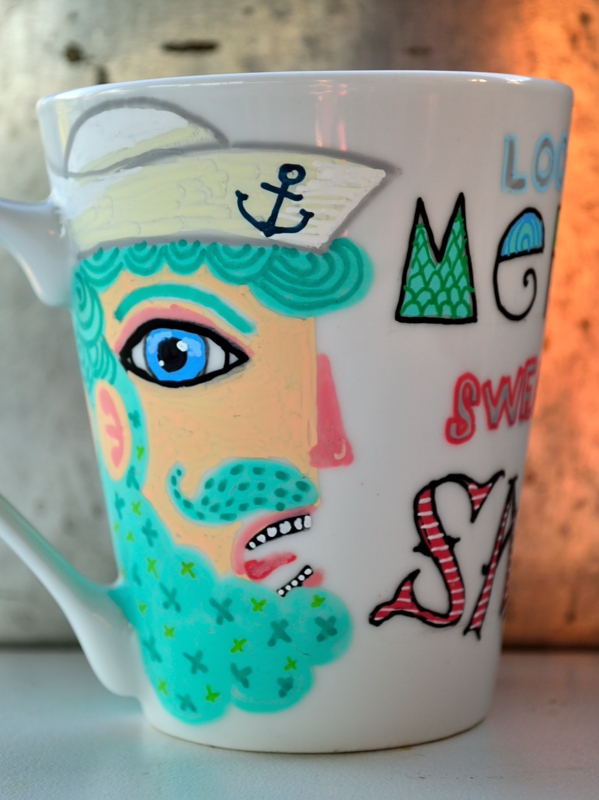 Few people know that Posca pens can be used on ceramics. Because we sell Posca pens in the shop, I’ve had to download the extensive materials information sheet  from the Posca website for our customers.

Drawings done with these pens can be baked in an oven to make them semi-permanent (the pieces probably wouldn’t hold up to heavy use, and must be washed gently, by hand). I like them much, much better than Sharpies, because the acrylic paint in a Posca pen is opaque, so that they cover with one stroke and I can layer different colours on top of each other. 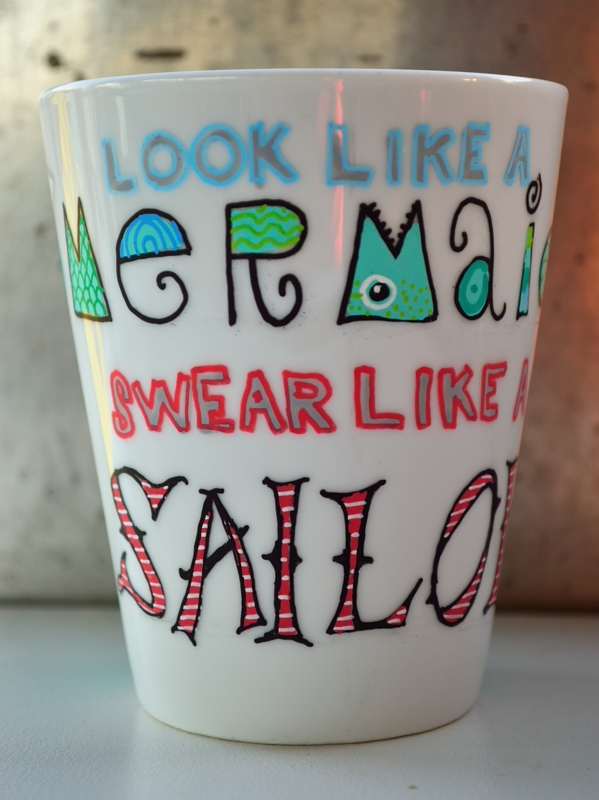 I can’t take credit for the sailor, which is not mine…he was from a bit of street art that I spotted in Colombia, over a year ago…

I’m uncomfortable with the fact that I’ve used someone else’s design, but it was the seed idea that got me started in the first place, and I didn’t actually believe I would finish the cup (because I’ve never drawn on a cup before, the surface sloping in funny ways, cleaning up with alcohol and gingerly holding it in some paper towel so as not to get the oil from my fingers on it…it all seemed too hard, I was sure I would fuck up at some point.) It wasn’t until I’d done both sailor and mermaid that I realised the thing was “for real”…that it was good enough to “fix” in an oven and keep.

It’s just for myself, and I won’t be repeating the design again. I would like to use the same quote on a mug for my Society6 shop, but coming up with the entire design from scratch. Someday. 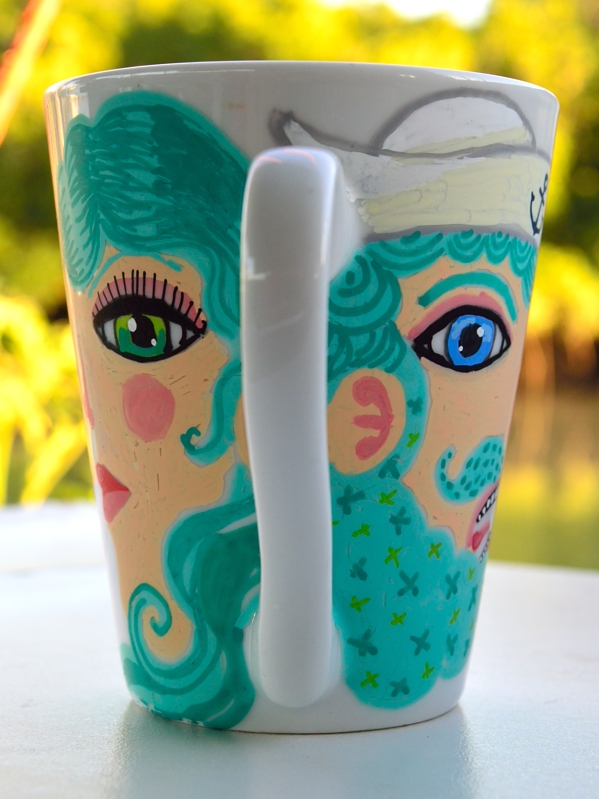 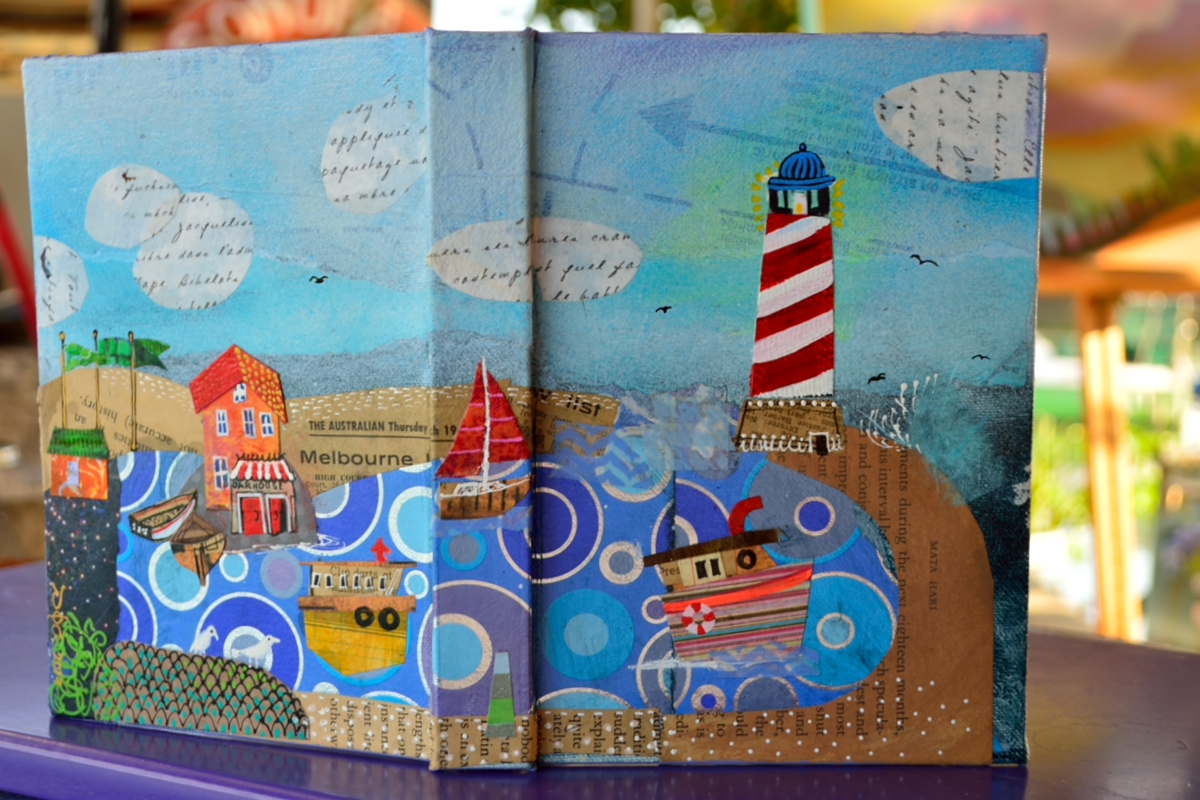 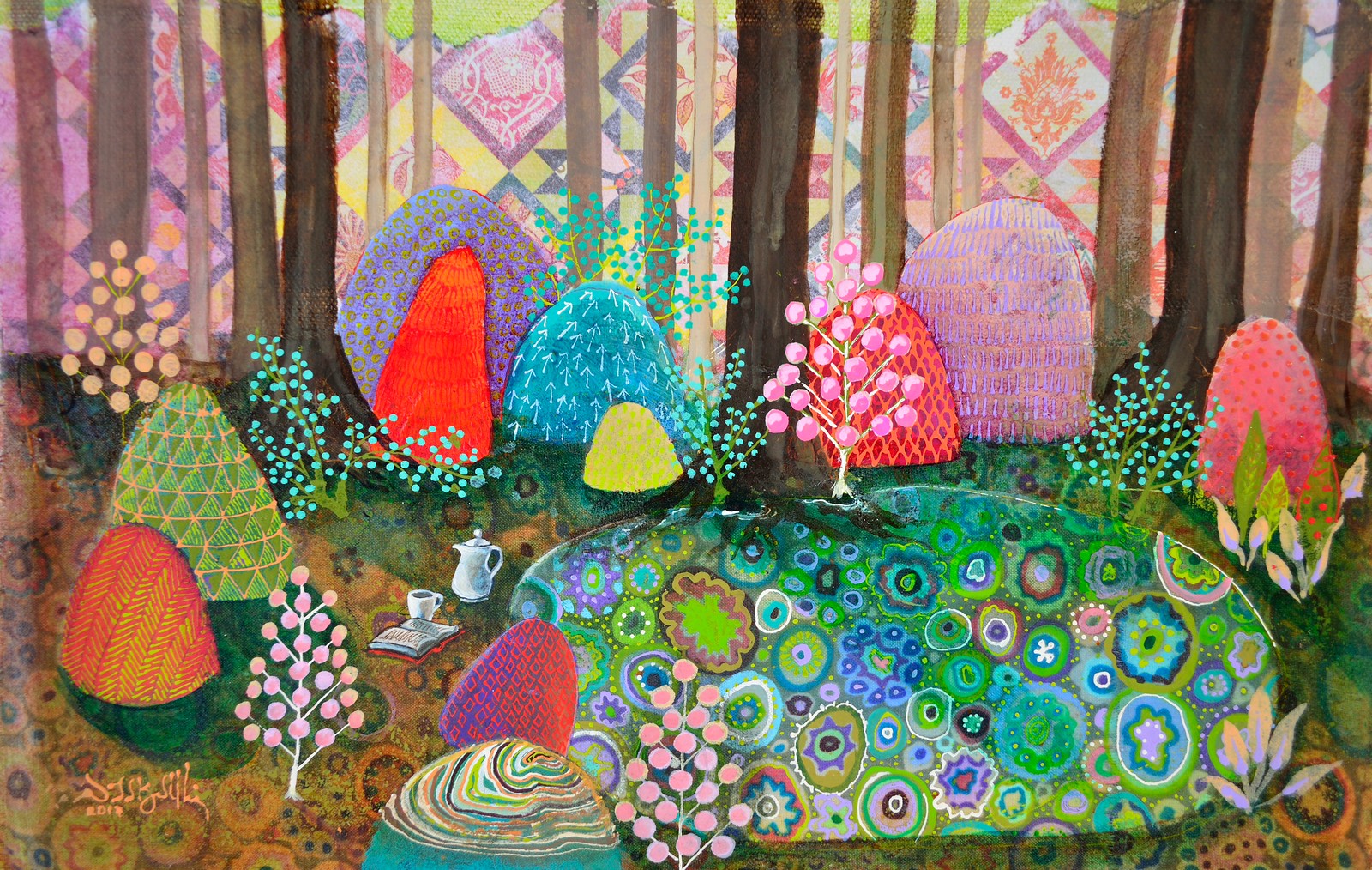