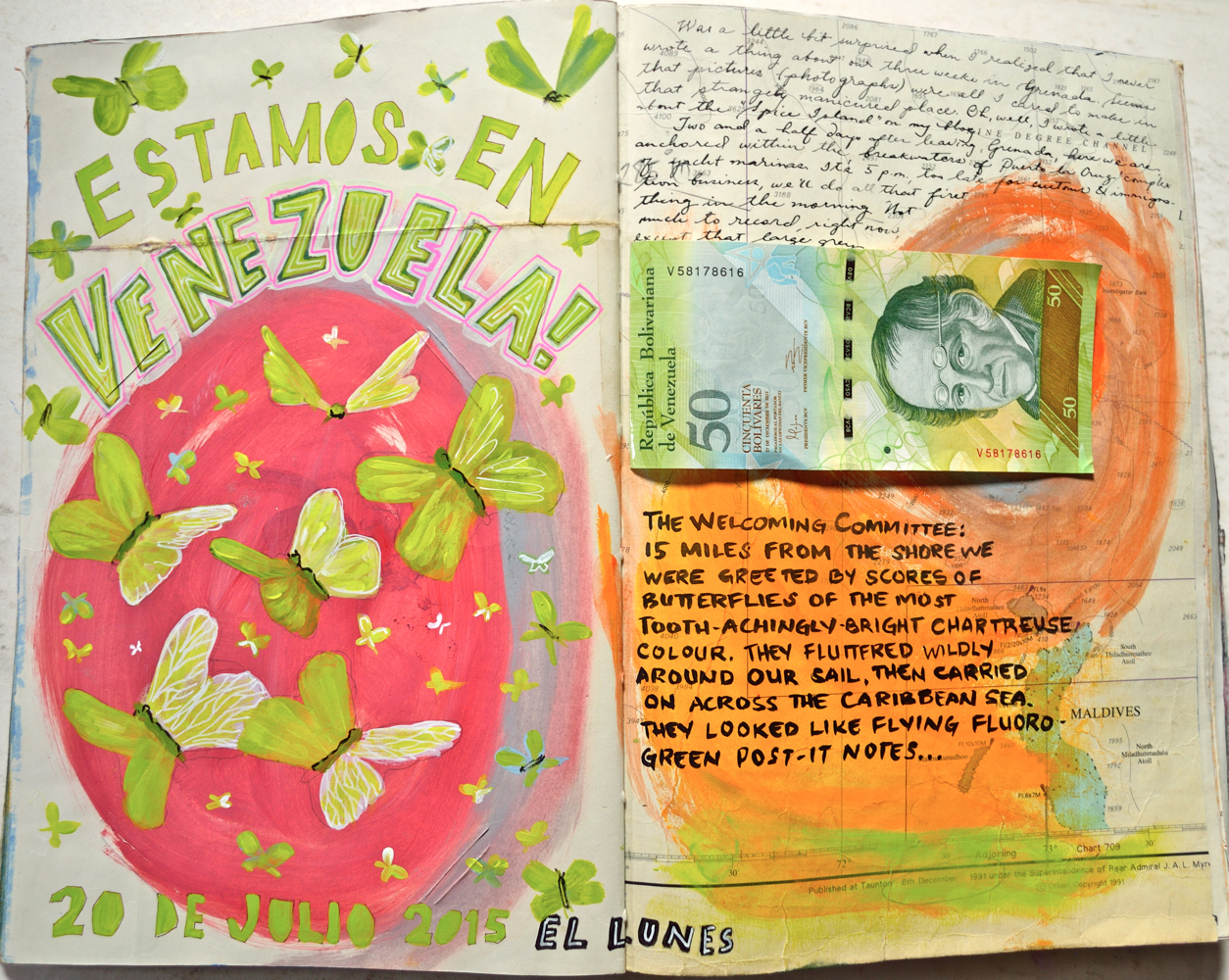 We have a berth in a marina…the first time, ever, that we’ve tied up alongside other boats at a wharf! It’s a bit like a ghetto…neighbours on either side of us, one boat has two yapping little dogs, and you can hear the other people at night. There’s little privacy on deck, what with the security guards looking down on us from their outposts, and people walking back and forth all day. But it’s very convenient, too: we can step ashore any time we want, go separate ways, no need to row or to wait for each other ashore. There’s good, fast wifi, and a bright, airy restaurant 10 metres away that makes great coffee, fresh fruit shakes, and cheap lunches.

We are going to be here for a while…mainly out of necessity, as we have to sit out the hurricane season somewhere outside of the hurricane belt (and this is the cheapest place to do that), but also because one of the two big goals for this whole trip is to learn Spanish, and we are in a country where it’s spoken, at last! (The other reason is to soak up fresh inspiration…fuel for a few years of creativity when we get back home.)

It’s a good place to be, right now, as a tourist with foreign currency…things are very, very affordable (it is very hard to spend more than $10 a day, here…for that money we have fruit, veggies, bread, pastries, some cheese and salami, several fruit shakes, and sometimes lunch at the marina’s restaurant!) and although many amenities and services are starting to slide with the hyper-inflation, much of the infrastructure and standards that were set up, back in the good ol’ oil boom days, are still around. Enough, at least, to make life here tenable. You can feel the pinch, of course: long lines for bread at the bakeries (and a limit of three loaves per person, per day), very few imported things on the supermarket shelves, a nationwide shortage of toilet paper not too long ago, and now the government has announced that there will be a shortage of beer this August, because they cannot afford the imported hops used by the breweries. Despite the obvious advantages for us, it’s hard not to feel for the poorer people (and for the fate of the country in general) during what must be difficult times for them. We try to spend as much money as we can, here, to compensate for the unreal power of our currency. We take taxis, leave tips, pay to have laundry done, buy knickknacks, eat out, pay others to do things we would normally do ourselves…very unusual for us, we are so tight, but this is one place where we can afford to be more relaxed about splurging, and God knows the locals need every centavo. Who wants to be the sort of travelers who will walk 5 kilometres in the blazing sun to save the 30¢ taxi fare?

It’s not life as we’re used to in the developed West. You don’t make shopping lists or plan menus. Sometimes you cannot have whatever you want, for any amount of money. You buy what shops have, when they have it. When you find something good, you don’t put off buying it until another day, as it may not be there. You grab it when you see it. That said, anything locally produced…vegetables, eggs, meat, fruits, fish, flowers, rum, tobacco, corn & cassava, coconuts, sugar…is plentiful. The fresh produce market—a real market—is bursting with carts and stalls groaning under their loads of good things. The other day we were at the market and the air we were breathing was heavy with the perfume of fresh strawberries…in season, now, and for sale everywhere in giant mounds.

We are glad we kept our own counsel when it came to deciding whether we would “risk” coming to Venezuela or not. 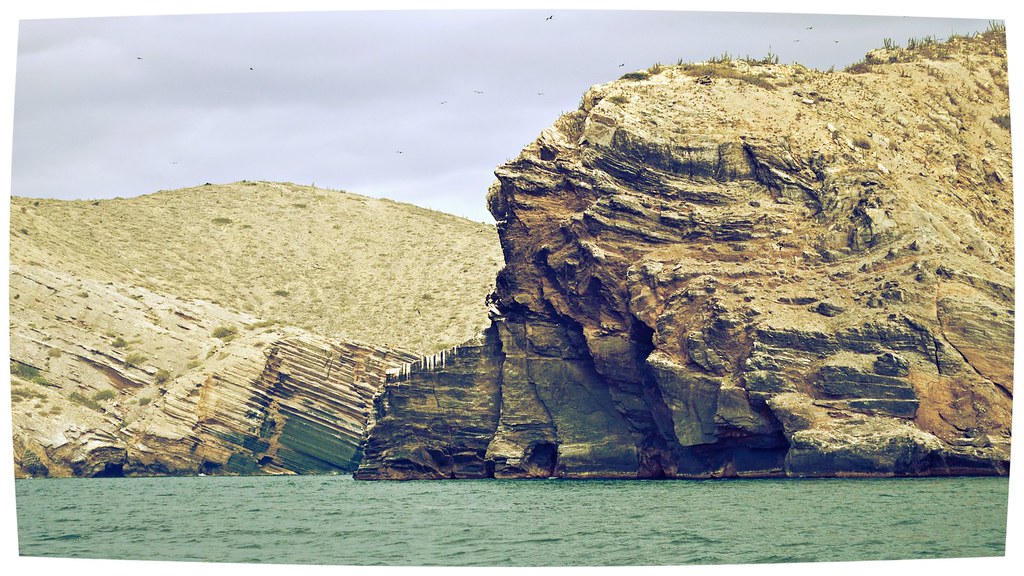 Advice from other sailors is extremely important to us as we plan our extended trip…it doesn’t matter so much what is said on the news (which is extremely sensationalist and bigoted), and you can’t rely on history books, statesman’s almanacs, or travel guidebooks…even when they’re just a few months to a year old. You absolutely have to keep your ear to the ground, and gather information as you move: yesterday’s quiet little village with fantastic snorkelling could be tomorrow’s “Bloodbath on the Beach!” headlines, or vice versa, so current knowledge of a place is crucial.

We were told (strangely, only by anglophone sailors: Brits, Canadians, US citizens) to stay away from Venezuela. “Pirates along the coast,” they said. “Thieves and murderers in the cities,” they added. Plus, “The government is unstable, the atmosphere is volatile. There are shortages of essential things…” Hmm. Interestingly, none of these cautious souls had actually been to Venezuela. Advice without pertinent experience is simply scaremongering, and it is worse than useless to a traveler. I’m not saying that you should ignore the warnings; I’m saying, find people who know what they are talking about! Gather several opinions, compare them, study them, weigh the pros and cons, and then decide. 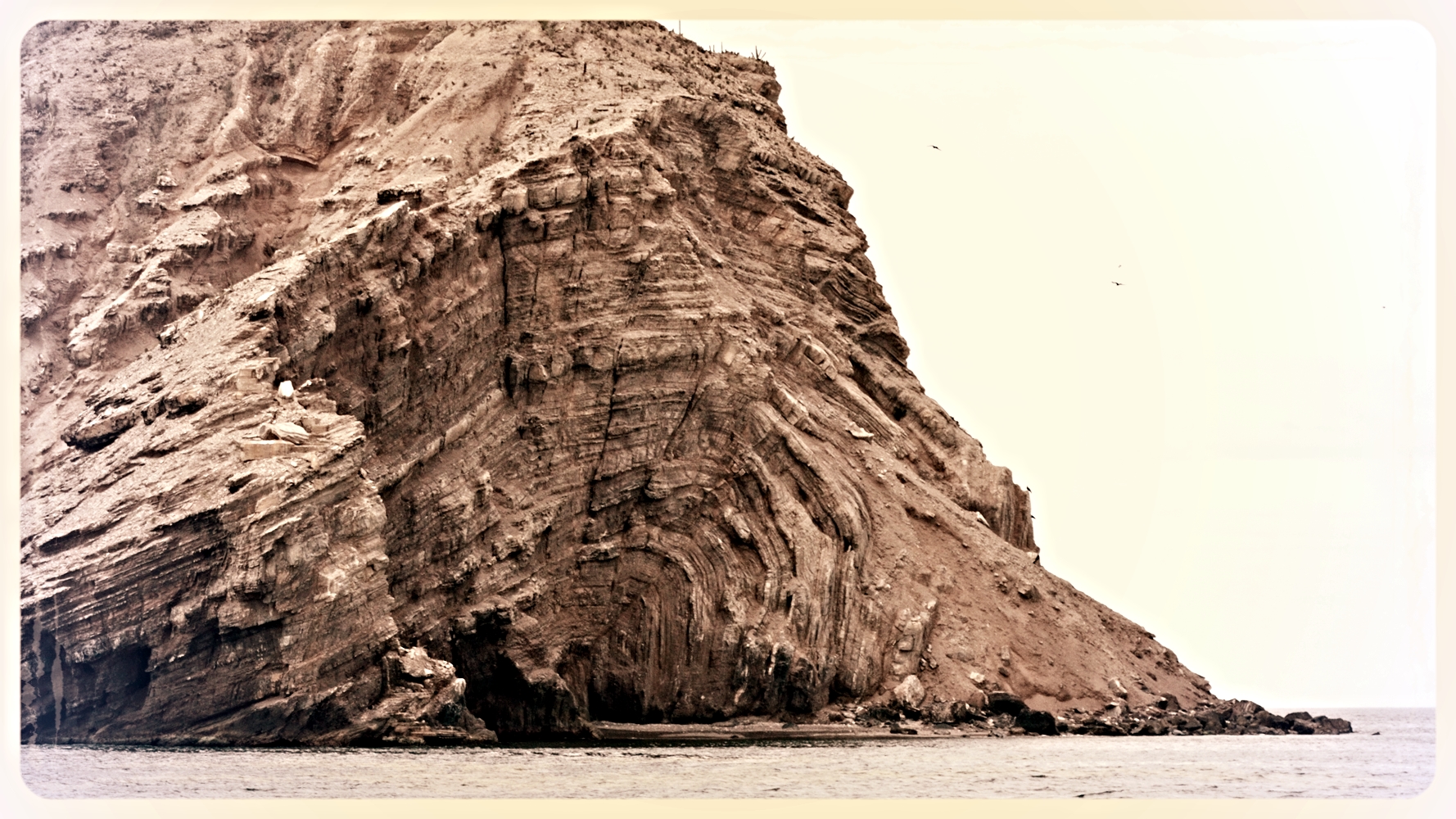 When we finally did meet sailors who had just been to Venezuela (German, French, Russian, Spanish…none of them were anglophones), they all said the opposite: “GO! It’s wonderful! The people are nice! Everything is so affordable! We love Venezuela!” They added that yes, there is piracy all along the coast, mostly by poor fishermen gone rogue, and preying on other fishermen. They don’t go further than 5 miles from the shore, because they all use little outboard engines, and that’s all the fuel they can carry. We were assured that certain ports, like Puerto la Cruz, where we are now, are heavily patrolled by the coast guard, because the wealthy people of Venezuela keep their million-dollar yachts in the dozen marinas around here, and take them out on the weekends. We simply had to avoid the coastline, go over the top of Isla Margarita (rather than between the island and the mainland), and then make a beeline for Puerto la Cruz, and we would never see a pirate (nor be seen by pirates).

Venezuela is no more dangerous than many supposedly “civilised” parts of the developed world…every place has its dangerous elements (but also its good people and worthwhile experiences.) For peace of mind, carry less of the pricey, irreplaceable stuff, and detach yourself from your possessions. Most thieves are not intent on killing people…you will not die if you hand over your phone, laptop, or camera. You will be sorely inconvenienced.